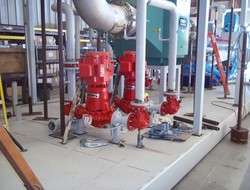 Blue Earth, Inc. a renewable/alternative energy and energy efficiency services company, announced today that it expects to complete its initial combined heat and power (“CHP”) energy plant in the first quarter of 2015. The energy plant will be located at the Pilgrim’s Pride Corporation (“Pilgrim’s Pride”) poultry protein processing facility located in Sumter, South Carolina. Pilgrim’s Pride is a subsidiary of JBS USA Holdings, Inc. Blue Earth will own and operate the approximate $5.3 million energy plant.

This initial energy plant was scheduled to be in operation by September 30, 2014, as the modular generator was delivered in August. However, completion of the power plant was delayed due to the unexpected delay in delivery of two important pieces of equipment.

Blue Earth’s, Sumter, South Carolina, co-generation energy facility will utilize methane made from Pilgrim’s Pride’s digester for useful purposes such as hot water, electricity generation, as well as useable gas that can be used in the plant boilers. Insulated hot water storage tanks will also be part of the project to upgrade the current thermal system. Currently the methane is flared off into the environment. This system supports the sustainability efforts of Pilgrim’s Pride. All electrical energy generated by the cogeneration facility will be sold to Duke Energy under a power purchase agreement.

Be the first to comment on "Blue Earth to Power on CHP Energy Plant in Sumter, SC in Q1 2015"