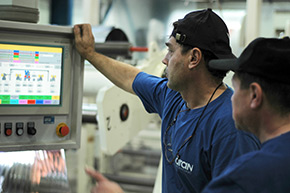 Another international company is establishing operations in South Carolina. Israeli-based  Aran Packaging, a leading company in the liquid packaging industry, is establishing its first United States operations in Greenville County. The company is investing $5.2 million in the facility, creating an expected 63 new jobs in Greer, S.C. over the next five years.

“A testament to Aran’s vision for growth and innovation, we are excited to be expanding into the U.S. market and, specifically, into South Carolina. Because of its geographic location, an excellent business atmosphere and superb workforce, we believe that South Carolina is the ideal spot for us to open our first U.S. facility,” said Aran Packaging CEO Lior Mor. “We thank the State of South Carolina, Greenville County and City of Greer for their support and look forward to opening our facility in July 2016, as well as hiring many great people to work in that facility. At Aran we know that our success is dependent on the individual success of each and every employee. ”

Established in 1983 in Israel, Aran Packaging has grown significantly since its inception. Today, the innovative packaging firm serves companies in more than 40 countries across the globe, offering advanced packaging solutions using aseptic and bag-in-box technologies for both the food and non-food industries. In addition to Aran’s headquarters and production facility in Israel, the company also operates a production facility in Valladolid, Spain, which serves the European market. In total, Aran currently employs 180 workers worldwide.

The company’s new Greenville County operations will be housed in an existing building, located at 1704 Poplar Drive in Greer. Situated just off of Interstate-85 near the Greenville-Spartanburg International Airport, this facility will allow the company to better serve its U.S. customers.

The facility is expected to be fully operational by July 2016, with initial hiring for new positions anticipated to take place in February 2016. Those interested in joining the Aran team should contact Hila Frish-Manor at aran@aran.co.il. For more information on Aran Packaging, visit www.aran.co.il.

Be the first to comment on "Aran USA Announces First U.S. Facility in Greenville County"