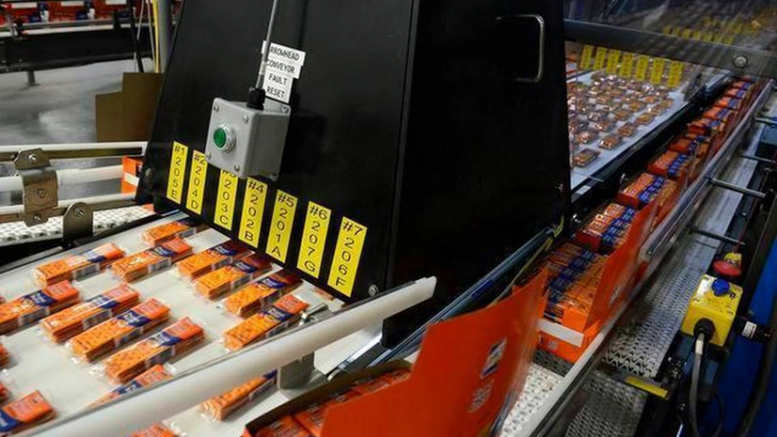 The last OpExChange plant visit of 2022 definitely did not disappoint the attendees from across South Carolina. This was held at Campbell’s Snacks just over the border in Charlotte, NC. Not only were the participants able to sample some of the most popular snack foods in the world, but they were also able to witness and discuss high speed automation in producing quality foods.

This facility has utilized robotics in their snack production for decades, with various generations of robotics currently in use. John Chandler, Director of Manufacturing hosted the visit along with several members from his team.

There are three plants on this large campus: The 700K sq. ft. Bakery, the 125K sq. ft. Salty Plant, and the 75K sq. ft. Emerald plant. All in, there are approximately 1,500 employees on the site that will produce about 230 million pounds of product this year. Between 60% and 80% of all sandwich crackers consumed in North America are produced from this Charlotte location. This site has been a member of the OpExChange for fourteen years.

Robotics Culture
During the pre-tour discussion, one of the guests asked if Campbells needed to up-train employees with the introduction of robots. John answered that this was not necessary because robotics is essentially part of their culture. The tour showcased several vintages of high-speed robots used to pick and place packs of crackers into cartons as well as robots used to palletize cartons of crackers. Both ABB and Syntegon robots are currently used in the facility. 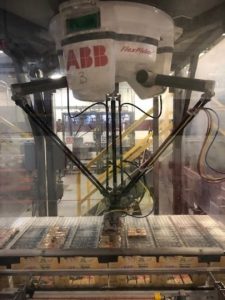 Variety Area Packaging – The ABB pick and place “pattern robots” used in the first section of the plant were approximately nine years old. The FlexPicker® model at that time was touted for its flexibility in a compact footprint. It was also designed for food handling capability.

John noted that no robots are perfect and that although effective, the newer generation robots have improved performance as well as increased flexibility. 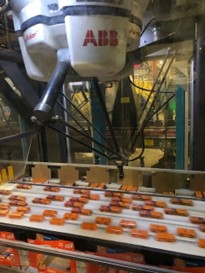 Line 2 Packaging – John commented that this line is affectionately known as their “celebrity” line because of the impressive sequence of twenty-two high-speed “spider” robots picking and placing packages while synchronizing with the queued carton packaging. Finished packs enter the line and are imaged by a sophisticated camera system. Empty cartons are introduced in a counter-flow direction.

The system is a “hungry man” system, where the package is imaged/inspected by the first camera. If it is not picked, the second camera will image it. This proceeds all the way down the line until the package is picked. The sequential robots incorporate redundancy into the system for picking efficiency.

Line 5 Packaging – The newest generation of robotic automation is utilized on Line 5 – the Syntegon TTM. There are several 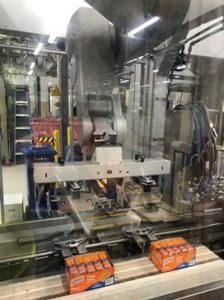 advantages to this technology. Not only does it pick and place the packages, but it also forms and closes the carton, combining both a previous and secondary operation.

Because it greatly reduces the amount of queuing, it also consumes significantly less floor space than the previous generation robots. A downside to this is susceptibility to minor downstream stoppages. Because there is less queueing, the entire system stops from a minor stoppage. The Charlotte team has implemented an in-house accumulator that will allow up to two minutes of queuing in the event of a upstream stoppage. 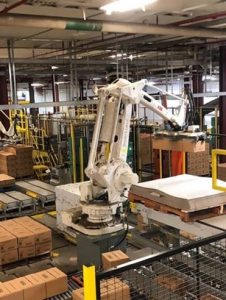 Warehouse Palletizing – John pointed out that the priority of the automation on this line is not speed, but flexibility – the ability to handle the palletization of a multitude of SKUs simultaneously.

Cases of snack cartons flow through this line at a rapid pace. They pass through a scanner that captures the SKU which routes it to the appropriate robot for palletizing. The majority of the robots used in this area are second generation, ABB robots, approximately nine years old.

Bakery
The tour through the bakery was impressive. The group was guided through one of the lines that runs around the clock, producing the sandwich crackers. Approximately 6,700 pounds of dough per hour are fed into an elaborate process that creates large, continuous sheets of dough that are precisely rolled, scored, and baked in a 250-foot oven.

The conveyorized output of approximately 16,700 crackers per minute are transported into rows of top and bottom crackers. A dollop of peanut butter is applied to the bottom and matched up with the top cracker to produce the world renowned ToastChee® cracker.

Robotics and Automation Advice
In the group discussion after the tour, John offered some sage advice to the visitors. When researching automation, John emphasized, “Make sure you do the math on what your bottleneck is, what accumulation is needed, and what your process reliability is. Do the Industrial Engineering math. When you have sequential processes that all have 98% reliability and if you don’t allow for accumulation, it doesn’t take long to get to the 70% level.”

About OpExChange
The OpExChange, sponsored by the South Carolina Manufacturing Extension Partnership, is a peer-to-peer network of manufacturers and distributors in South Carolina known for generating success for members through benchmarking and best practices activities. Member companies host events and share practical examples of industrial automation, lean manufacturing improvements, and leadership development. It is an invaluable resource to South Carolina companies that provides access to others who are on similar improvement journeys. If your company is interested in participating in this collaborative effort to improve both the competitiveness of your operation and South Carolina, contact Mike Demos (Mike@OpExChange.com). More information and upcoming plant visits are