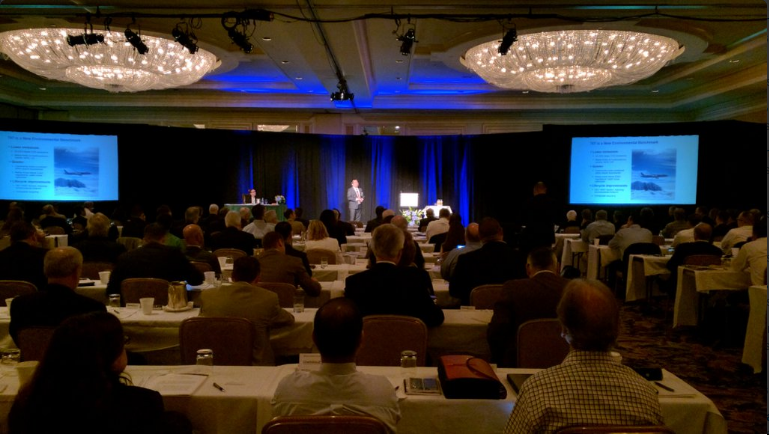 Steve Townes, chairman of SC Aerospace and CEO of Ranger Aerospace, was a keynote speaker.  He highlighted the burgeoning ecosystem of aerospace and aviation related companies across the state. He heavily emphasized the state-wide linkages between industry, academia, and government in support of aerospace growth here. He declared that our state is “workforce-ready” to accommodate more companies expanding in South Carolina, highlighting programs such as Apprenticeship SC and Ready SC in the 16 schools of the SC Technical College System, and innovations coming out of the McNair Aerospace Center at USC in Columbia.

When asked about State-offered incentives for aerospace companies to move or expand operations here, Townes noted first that the climate for growth here is business-friendly, tax-wise, with really good quality of life, and a true strategic priority in the state’s economy. But he also said “If your aerospace company from around the US or around the world wants to plant your flag here with 50 jobs or more, rest assured you’ll be welcomed with open arms—you can talk about specific incentives with the SC Dept. of Commerce.”

Townes also made a bold statement intended for students and veterans: “If you learn how to work on or around airplanes, it’s likely you’ll have a well-paid job for life!”  Citing employment metrics in SC, he showed that the average Manufacturing job in SC pays around $41,000 while the average Aerospace job here pays $71,000.

SC Aerospace is a statewide public/private partnership that unites the efforts of several State government agencies, all the higher educational institutions here, and literally hundreds of companies from the Upstate to the Low Country, toward the common objective of growing more aviation-related businesses here

As a follow-up to the Conference, the AviationWeek Group has now launched a 5-state survey about the aerospace workforce needs in North Carolina, South Carolina, Georgia, Alabama, and Florida.  The SC Aerospace team actually initiated this survey effort, helping to enlist the other states to join in.

In his speech, Townes stated the five-state region has become “the fastest growing regional concentration of aerospace and aviation related enterprises in the world.”  Citing reports from each of the five states, he estimated that there are nearly 3,000 aviation related businesses or branches in the region, with an annual aggregate economic impact of well over $100 Billion per year.

In addition, there are heavy concentrations of military bases around all five states. He called it a “hotbed of growth that will inexorably keep getting bigger as the supply chains aggregate here.”

Townes concluded by saying:  “10 years from now in South Carolina, the economic impact of aerospace will have doubled to $35 Billion per year….and Charleston Harbor will resemble Puget Sound.”

BOEING AND OTHER LEADING PLAYERS

Another keynote speaker in the conference was Darren Sekiguchi, who is newly appointed as the Supply Chain Director for Boeing-South Carolina in Charleston.  Mr. Sekiguchi spoke about Boeing’s progress to date, and forward-looking plans for continued production growth at the Dreamliner factory.

Last week, Boeing officially announced that employment in their South Carolina operations has now eclipsed 8,000 personnel, with billions already invested in their multiple large-scale work sites in North Charleston and elsewhere around the metro area.  Other speakers spoke on various advanced manufacturing technologies that are affecting the aerospace industry, including composites, advanced metal-forming, electronics, and robotics.