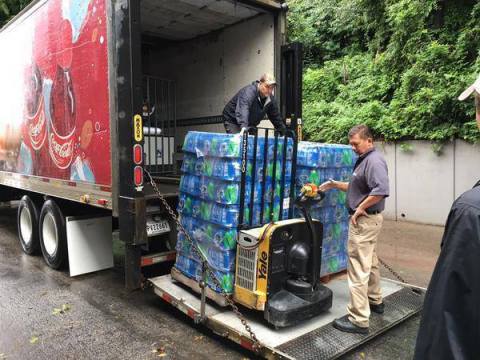 While South Carolina has been in the national headlines due to record flooding, the state’s manufacturing machine remains largely intact. Now, the Palmetto state’s manufacturers are focusing on helping their communities recover.

Although there have been some minor inconveniences, “the manufacturing industry not been significantly impacted,” said Lewis Gossett, CEO of the South Carolina Manufacturing Alliance. “Most of the companies have their work-around plans figured out,” he said.

South Carolina was barraged with historic floods that dumped over two feet of rain over a short period. The rain and subsequent flooding lead to road, rail and bridge closures. A 13 mile streach of Interstate 95 reopened on Tuesday. Portions of the Norfolk Southern line between Charleston, S.C. and Florence, S.C. were flooded near Kingstree, S.C. CSX has reported that they have restored service.

“We have not noted any major impacts to our manufacturers,” said SC Department of Commerce Deputy Secretary of Commerce Jennifer Noel at a recent South Carolina Economic Developers Association (SCEDA) meeting. According to Noel, the Department is preparing communications for South Carolina business on how they can access state and federal assistance.

In Columbia, Intertape Polymer Group was forced to shutdown their manufacturing facility. While the plant was not affected, production was shut down temporarily to ensure the safety of its employees.

Daimler Vans Manufacturing plant in Ladson was idled briefly due to road closures and school closures. According to spokeswomen Andrea Berg, the company expected to make up lost production time.

In Spartanburg, BMW Manufacturing was not impacted, but according to spokesman Sky Foster, some vehicle rail shipments were delayed.

As the waters have subsided, South Carolina’s manufacturers efforts have turned to helping the people of the state recover. Several manufacturers have helped the recovery efforts through donations.

Boeing, which employs 7,500 people in the state announced a $100,000 donation to the American Red Cross. “Our intent is that this donation will help speed the healing and recovery from this flooding once it fully subsides,” said Beverly Wyse, Boeing South Carolina vice president and general manager. “The American Red Cross is a tremendous resource that is here to help our community, including our Boeing teammates who have been impacted.”

Milliken also announced a $100,000 donation to the American Red Cross. “Over 4,000 Milliken associates call South Carolina home, and we are committed to supporting our neighbors, families, and friends who are facing hardships due to the devastating floods,” said Joe Salley, Milliken & Company’s president and CEO. “We hope that our donations will provide both near-term relief to those impacted and longer-term aid in the rebuilding process.”

Proterra, based in Greenville also announced a donation to the American Red Cross. “Proterra is proud to call South Carolina home. We feel it is critical as an engaged community member to lend our assistance during this catastrophe,” said Ryan Popple, CEO, Proterra. “Unprecedented floodwaters have caused severe hardship for thousands of people throughout the region. As part of our commitment to the greater South Carolina community, Proterra is providing this support to the American Red Cross to help ensure the needs of our friends and neighbors are being addressed.”

Be the first to comment on "Manufacturers Impacted by Floods, Turn Efforts to Community Recovery"