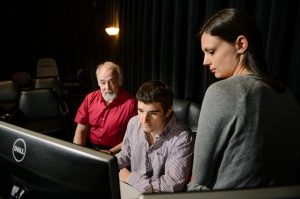 A growing number of advanced manufacturing companies in the Lowcountry want their professional employees to seek graduate degrees in engineering and science while they work, but the opportunity to pursue those degrees in the region has been limited.

Not for much longer.

A day after Volvo announced it has chosen the Ridgeville area for a new plant, Clemson University officials unveiled the first degree programs that will be available in nearby North Charleston at the Zucker Family Graduate Education Center. Students will be able to work toward research-focused graduate degrees in Computer Science and a Master of Fine Arts in Digital Production Arts. They will be the only degrees of their kind in the Lowcountry, largely targeting working adults who want to stay in the area.

“We see a big demand for these degrees in the Charleston area,” said Robert Geist, a professor in the School of Computing. “The sooner we can offer them, the better.”

Geist will be among the first professors based out of the $21.5-million Zucker center. He is a visual effects expert who has a credit in “The Hobbit: An Unexpected Journey.”

He also co-founded Digital Production Arts, a Clemson degree program that has paved the way for scores of students to work on visual effects in movies, including “Frozen,” “The Croods” and “How to Train Your Dragon 2.”

“Companies like Boeing want employees to seek graduate degrees while they work,” Geist said. “Our program opens the door for them to do so without leaving the Lowcountry.”

The degree programs that Clemson announced today are housed in the School of Computing, where enrollment has grown nearly 88 percent, going from 387 in 2007 to 726 today.

Anand Gramopadhye, dean of the College of Engineering and Science, said that graduate programs will be critical as the state’s economy becomes increasingly reliant on brains rather than brawn.

“This is all about expanding the state’s knowledge-based economy,” he said. “Charleston is one South Carolina’s most valuable assets. The more high-level education we can offer, the more competitive we will be in attracting new businesses and retaining the ones we have.”

Eileen T. Kraemer, the C. Tycho Howle Director of the School of Computing, said she has seen a huge need for computing expertise.

“Our new courses are going to fill a critical industry need in the Charleston area,” she said. “At the same time, it will enable working professionals to get a career-advancing graduate computer science degrees without leaving the Lowcountry.”

The Zucker center is going up at the Clemson University Restoration Institute, which is breathing new life into a former naval shipyard. Clemson officials broke ground on the center earlier this year but have said little until today about what types of courses would be offered or who would be teaching.

Nikolaos Rigas, executive director at the Clemson University Restoration Institute, said that the degree programs are just the beginning.

“Several graduate degrees in engineering will be available once we’re up and running,” he said. “When we’re at full strength, we’ll have about 200 students, at least 12 faculty members and 40 researchers and staff members at the institute.”

Classrooms with cutting-edge technology will connect the Zucker center to Clemson’s main campus. High-resolution cameras will have motion sensors, so if a student raises a hand, the camera will pan to where the action is.

“It will be kind of like Skype on steroids,” Geist said.

Several students, particularly those who study electrical and computer engineering, will have the opportunity to do research in two cutting-edge labs.  The Lowcountry campus is home to an  electrical grid simulator known as the Duke Energy eGRID and a $98-million facility that tests wind turbine drive trains, both housed in the SCE&G Energy Innovation Center.

The two labs are linked and allow researchers to work on some of the technical challenges that need to be overcome to widen the use of renewable energy, such as wind and solar power.

Digital Production Arts is Clemson’s pipeline to Hollywood. The program prepares students for the animation, visual-effects and electronic-game industries. More than 150 alumni have garnered film credits since the program started in 1999.

Christian Weeks, of Summerville, went into the Digital Production Arts program on Clemson’s main campus after receiving an undergraduate degree in computer science.

“It’s a great way to combine a dual interest in the arts and sciences, and that’s why I’m here,” he said.

Jenny Thompson, who hopes to work for an animation studio, entered the Digital Production Arts program after receiving a Bachelor of Arts in Studio Art from the University of North Carolina-Wilmington.

“”I wanted to get technical skills that would complement my undergraduate degree,” she said.