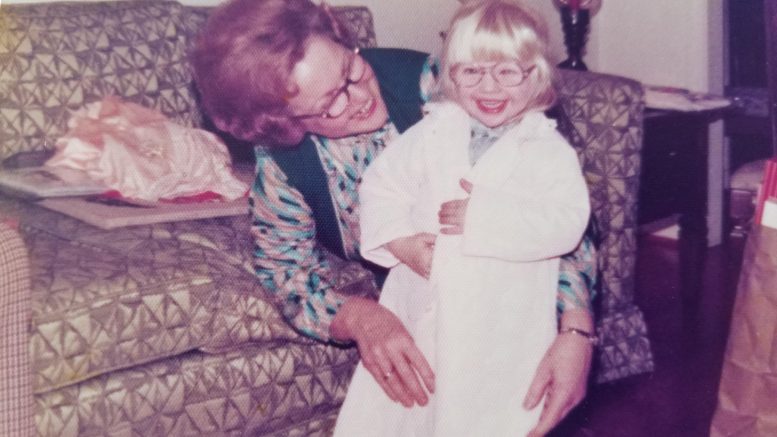 Nellie Araminta Chapman, to be specific, the middle name being a hand-me-down from her mother and grandmother (with the spelling altered slightly each time (“Araminter” and “Armentha”, respectively.) I would wonder, as a child who “Mittie” was as the family discussed “the old days”, and was much older before realizing great-grandma Araminta had wisely chosen a moniker more pleasing to the ear. 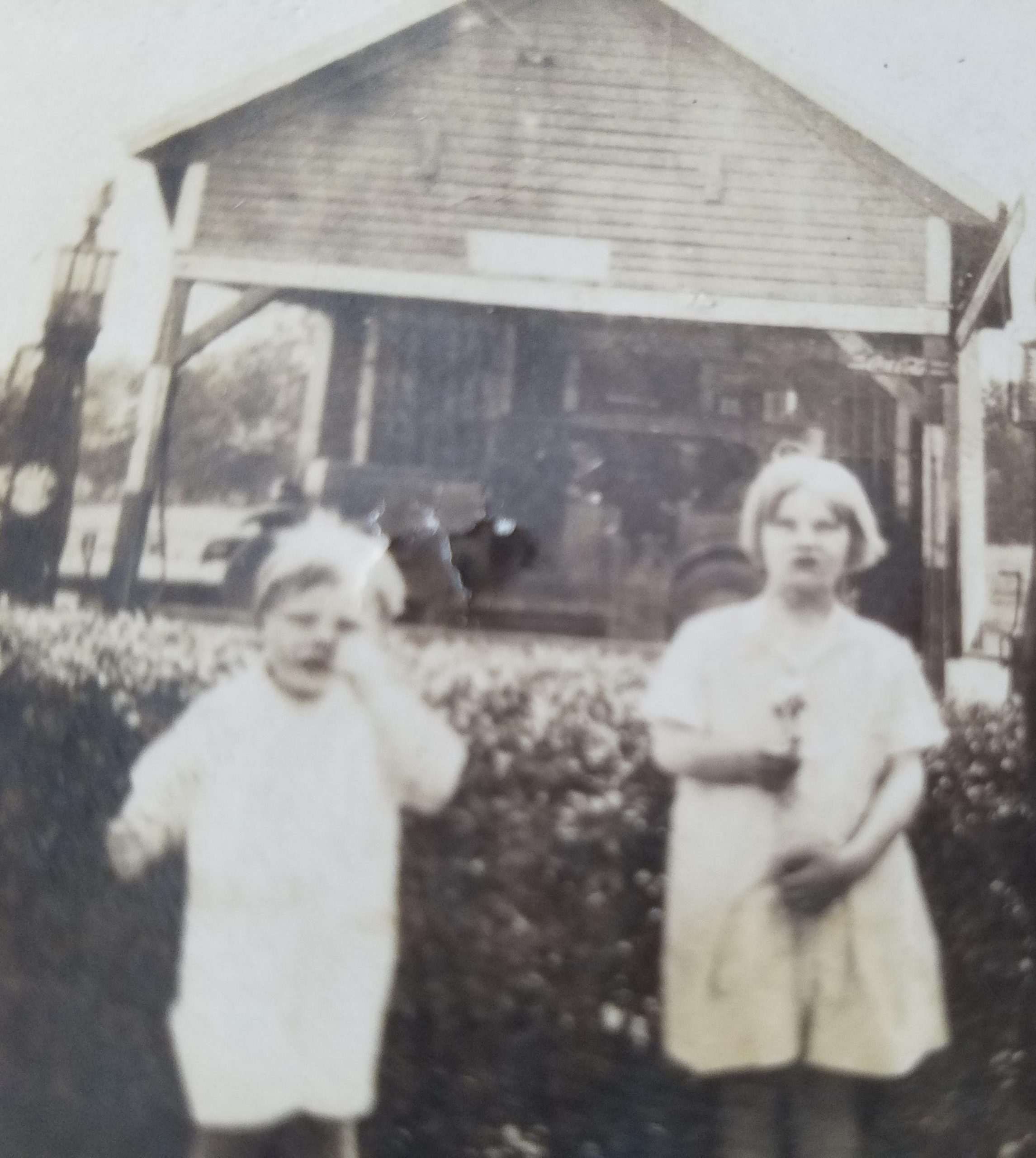 Young Nellie with her brother in front of their father’s service station in Anderson County circa. 1930s

Born into a prosperous farming family in Anderson County in 1923 (here I should pause to offer my heartfelt apologies to her, since she was as carefully guarded about her age as she was her God-given hair color…) Nellie was a descendant of proud Scottish immigrants who had settled in the Upstate of South Carolina centuries before.

It would come to be a true scandal in the family that a member of the Campbell clan (her mother’s people) had married into the historically-reviled McDonald clan, when Nellie would marry my grandfather, Marion David McDonald.

True to the stereotype, she and the rest of our family were blessed with the preternatural ability to hold any and all sorts of grudges, regardless of if the grudge had any basis whatsoever in reality, or had simply been manufactured out of whole cloth.

Case in point: I distinctly remember visiting with my grandparents when their sweet neighbor, Miss Lib, brought over a beautiful golden pound cake.

My young mouth watered as the smell from the partially-open cake box wafted through the air, as I began anticipating sneaking a “sample” bite when no one was looking.

I watched anxiously as Grandma, resplendent in her pink polyester peignoir set (her standard attire regardless of season or sensibility) smiled a tight smile, reached out her jewel-spangled hands, and received the treasure. 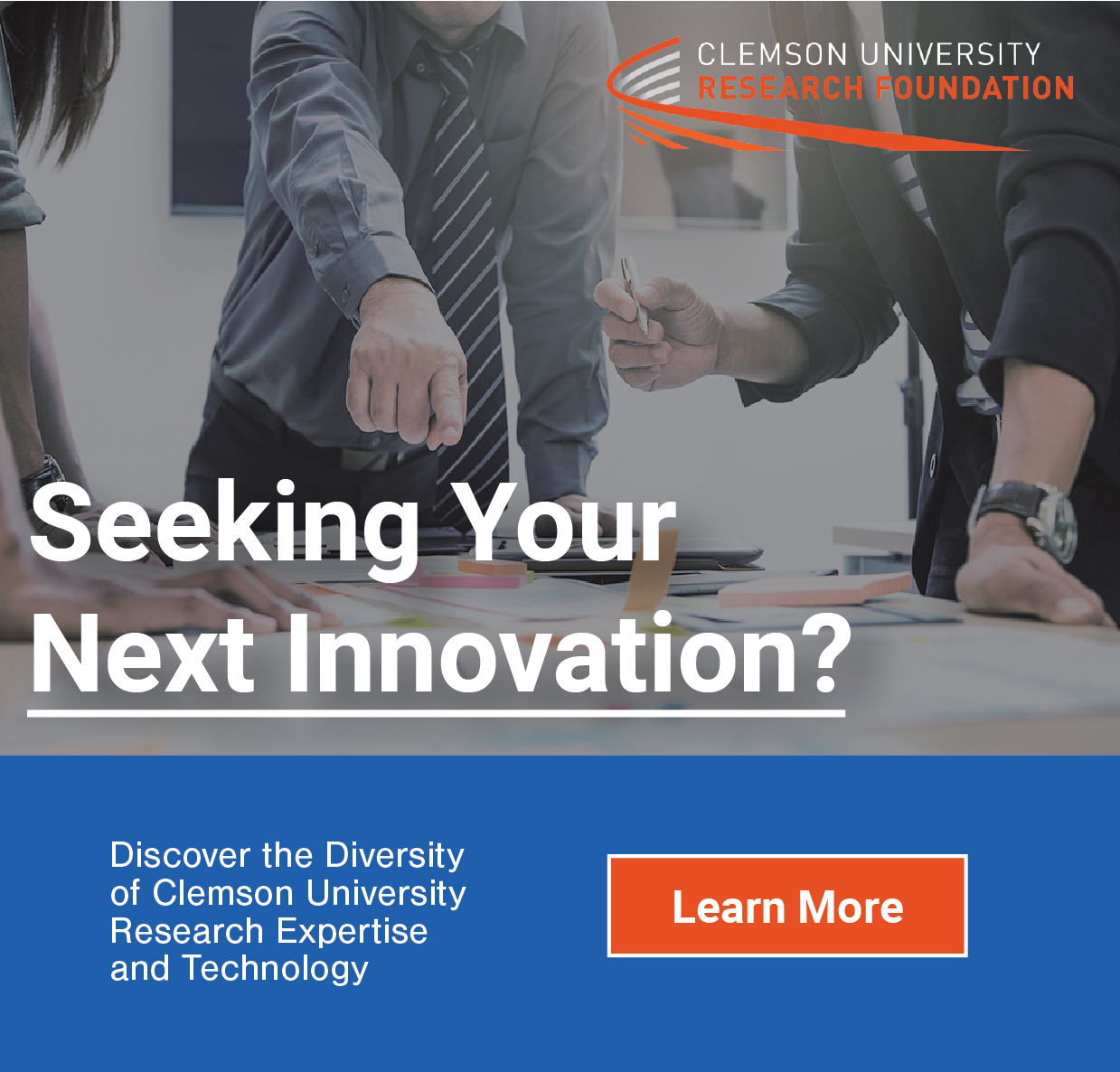 With a curt “Why thank you, you shouldn’t have” (which was spoken with words only, as her face belied her annoyance) she balanced the box on one tiny hand and slammed the door in Miss Lib’s face with the other.

Soundlessly, and with the gritty resolve of a soldier marching into the fray, she paraded the cake box through the living room high atop her hand, to the back door, where she made a brief ceremony of fully opening the box, opening the large trash can on the back patio area, dumping in the cake (her arm fully extended upwards to make the cake’s descent even more dramatic) then tossing in the box.

Letting the lid on the can slam shut with a thud, she dusted her hands together as a nod to a mission accomplished, and then came back in the house. We kids sat speechless, our disappointed faces speaking for us. Not a one of us five grandchildren dared question her actions, and she resettled herself, utterly unfazed by her confectionery brutality, on the floral chintz-covered sofa, lying in stately repose with her glass of Pepsi Cola (extra ice, and don’t you forget it.)

Such was Nellie’s nature. She suffered no fools or foolishness, unless it was of her own making. Some of my most fond memories involve her tossing us grandkids into the back of her impossibly huge and impossibly luxurious blue Cadillac for adventures, always popping in a Johnny Cash or Kenny Rogers cassette tape for our traveling music.

For a couple of Cowpens kids whose Daddy was the proud owner of an ancient, primer-gray Ford Granada with burgundy naugahyde seats that stuck like grim death to one’s bare thighs in the summer, this was grand living, indeed.

She would spoil us with the trappings of youth, and had both a treat drawer and a “surprise drawer” where we kids would agonize over selecting the one item we were allowed each visit. 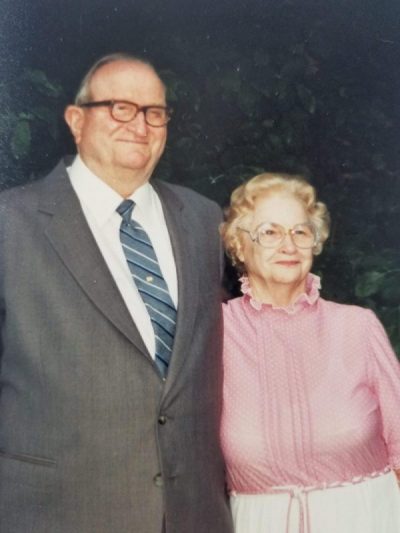 Upon returning home after one particular visit, I distinctly recall noting the apparent apoplexy that struck my poor Mama when she learned that not only had we gone to Strossner’s bakery TWICE, but Grandma had also appointed herself the new and final arbiter of the movie rating system, and marched my brother and me, ages 9 and 7, respectively, to see Jaws 3.

We could not, for the life of us, understand what our puritanical mother could object to in a description of a weekend rife with refined sugar and 3-D shark attacks.

My grandparents were, by most standards, financially well-off, a direct result of my grandfather’s hard work and success in building McDonald –Sellars House Moving in Greenville in the 1960s.

Relying on the engineering training he received in the Marines, his solid work ethic, and, perhaps, a growing need to provide some distance between himself and his lovely yet demanding bride, he worked tirelessly to create his business, and was rewarded with the financial fruits of his labor.

He remained ever-modest about his success, however, allowing Ma, as we called her, to do any necessary flaunting of their social position.

Which she did, as though it were her JOB.

Diamonds, mink stoles (which were a bit of a curious purchase, given the South Carolina climate,) and the omnipresent Cadillac, which was upgraded to a new model every two years, paid for in cash. Grandpa’s one indulgence was also of the automotive nature. His vehicular vice was a Mercedes, and would he upgrade his model on the alternating years of Ma’s Cadillac trade-up.

He preferred German engineering to comfort, while she preferred a vehicle approximately the size of a small schooner, with which she could effectively threaten both other drivers and unfortunate pedestrians who might incur her wrath for the sin of failing to cross the road quickly enough or some such transgression. 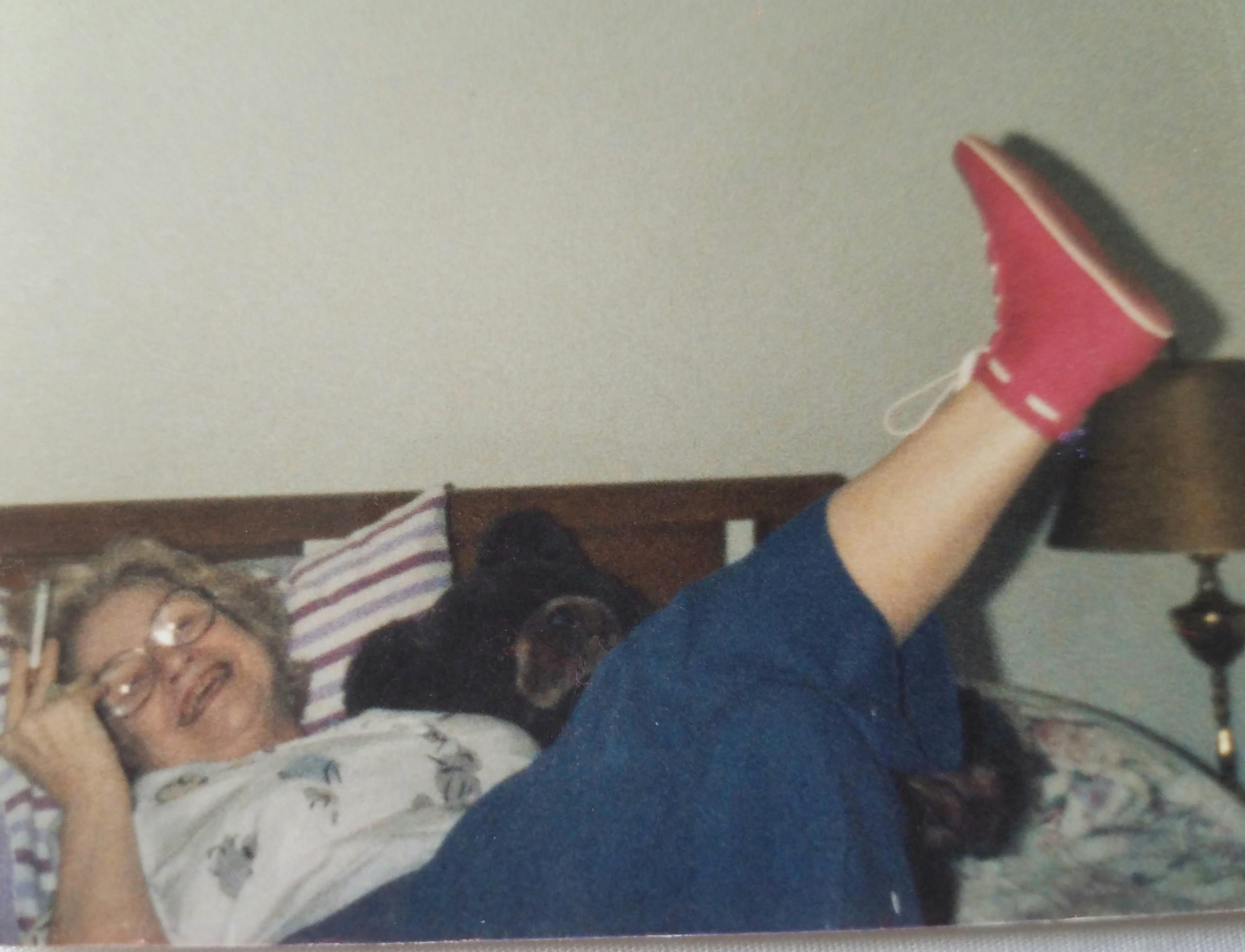 She was both short (4’11”) and short-tempered, and the combination of her obvious inability to see over the steering wheel and penchant for yelling things like “Get outta the way or I’m going to suck you up my exhaust pipe and toot you out my horn!” (an actual quote) made every outing with Ma a breathless and delightfully terrifying adventure for us kids.

I can still smell her Chanel No. 5 perfume if I close my eyes. In all likelihood, this olfactory recall ability is probably due to her sadistic tendency to grab an unsuspecting grandchild at random and press them to her unspeakably-ample bosom, attempting to either love or suffocate the life out of them.

The combined force of her bosom and the bold fragrance was enough to leave us little ones woozy, a fact that made Grandma unduly happy as we staggered away from her mercenary love attacks.

But this story is not about “Ma” Nellie as I knew her, tormentor of pedestrians and destroyer of perfectly-good-pound-cakes. This is about young Nellie. Young, beautiful, ambitious, no-nonsense Nellie who was bound and damned determined to find a way to fulfill her self-proclaimed destiny of being a lady of luxury. This is a story of a woman who worked tirelessly, so she didn’t have to work at all.

Tune in next week for part 2

Be the first to comment on "Her Name Was Nellie, (Part 1)"