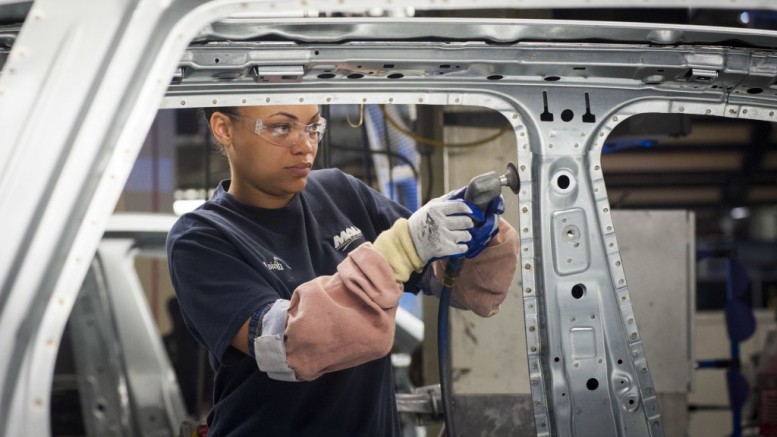 In a special ceremony at its Spartanburg plant this morning, BMW celebrated its three millionth vehicle to roll off the line. The vehicle, a Donington Grey Metallic X5 M with Mugello Red Full Merino leather seats and Carbon Fiber interior trim, was driven by Dawn Burgess, Associate #433, hired in 1994. Burgess presented the keys to the milestone vehicle to Manfred Erlacher, President and CEO of BMW Manufacturing.

“The growth of this plant has been quite extraordinary,” said Erlacher. ”Today, as we witness another historic moment, I am delighted to announce that BMW’s profound impact in South Carolina continues. I am grateful for our dedicated associates and their commitment to building premium vehicles for the world.”   The three millionth BMW will be prepared for shipment to a customer in Kristianstad, Sweden.

Guest speakers at the event included South Carolina Secretary of Commerce Bobby Hitt and Jim Newsome, President and CEO of South Carolina Ports Authority.
“What a great day to celebrate as BMW marks another milestone in South Carolina,” said Governor Nikki Haley. “Now with three million cars produced with care and pride by South Carolina hands, BMW continues to be one of the shining success stories in our state’s history. We congratulate them on this achievement.”

“For over 20 years, BMW has been a catalyst for the exponential growth of our state’s auto sector, which today includes companies in 40 of our 46 counties,” said Secretary of Commerce Bobby Hitt. “But beyond our borders, it’s a point of pride for our workforce that now three million world-class, quality-made vehicles have been delivered for the global market – from right here in South Carolina.”

“BMW operations are a tremendous asset to our port and state, and we are proud to celebrate the milestone achievement of three million vehicles produced with their leadership and talented workforce,” said Jim Newsome, SC Ports Authority president and CEO. “Automotive manufacturing is significant to the port for both import and export volume growth. BMW is the largest user of our roll-on/roll-off facility at the Columbus Street Terminal as well as the SC Inland Port, and their expansions have been exciting opportunities for us. We value our role in BMW’s international supply chain and look forward to a strong continued partnership.”

On display, in addition to the three millionth vehicle, were:

In February 2015, the U.S. Department of Commerce confirmed that BMW is the largest U.S. automotive exporter of passenger vehicles by value. With an annual value totaling $9.2 Billion, BMW’s single plant in South Carolina exceeded exports from Michigan, Alabama and California. In 2014, nearly 250,000 vehicles were exported from its South Carolina plant, over 70% of the plant’s total volume.

In March 2014, BMW Group announced an additional $1 Billion USD investment for the South Carolina plant from 2014 through 2016. In total, since 1992, the company has invested nearly $7 Billion through December 2014. A 2014 report published by the Moore School of Business at the University of South Carolina revealed that BMW Group activities in South Carolina had a total impact of $16.6 Billion on the state economy. In total, BMW’s presence in South Carolina supports a total of 30,000 jobs throughout the state, including 8,000 at the plant in Spartanburg.

BMW Manufacturing currently produces more than 1,200 vehicles each day. The factory is the exclusive producer of all BMW X3, X4, X5 and X6 vehicles (and their variants) to more than 140 global markets. In 2014, the plant celebrated two decades of production and announced a production capacity increase to 450,000 vehicles that will make the Spartanburg plant the largest BMW plant in the world.  In addition, by the end of 2016, the plant has committed to adding 800 more jobs, bringing the total employment at the plant to nearly 9,000.