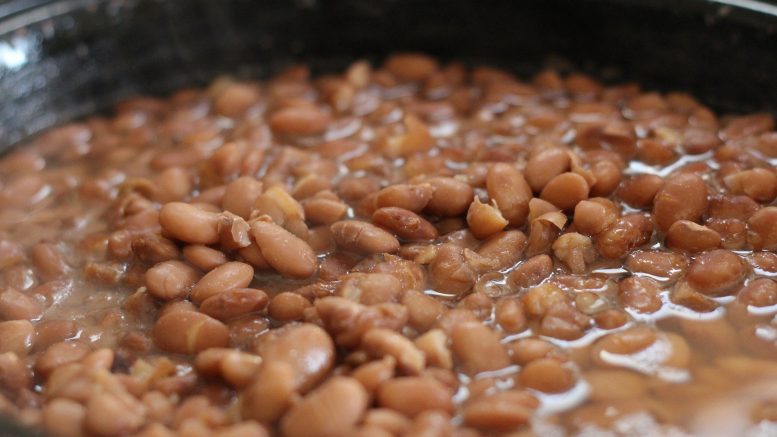 The statement itself, at first blush, was as benign as a junebug on a windowsill, but the context of her breezy reply caused a myriad of questions to instantly flood my mind. 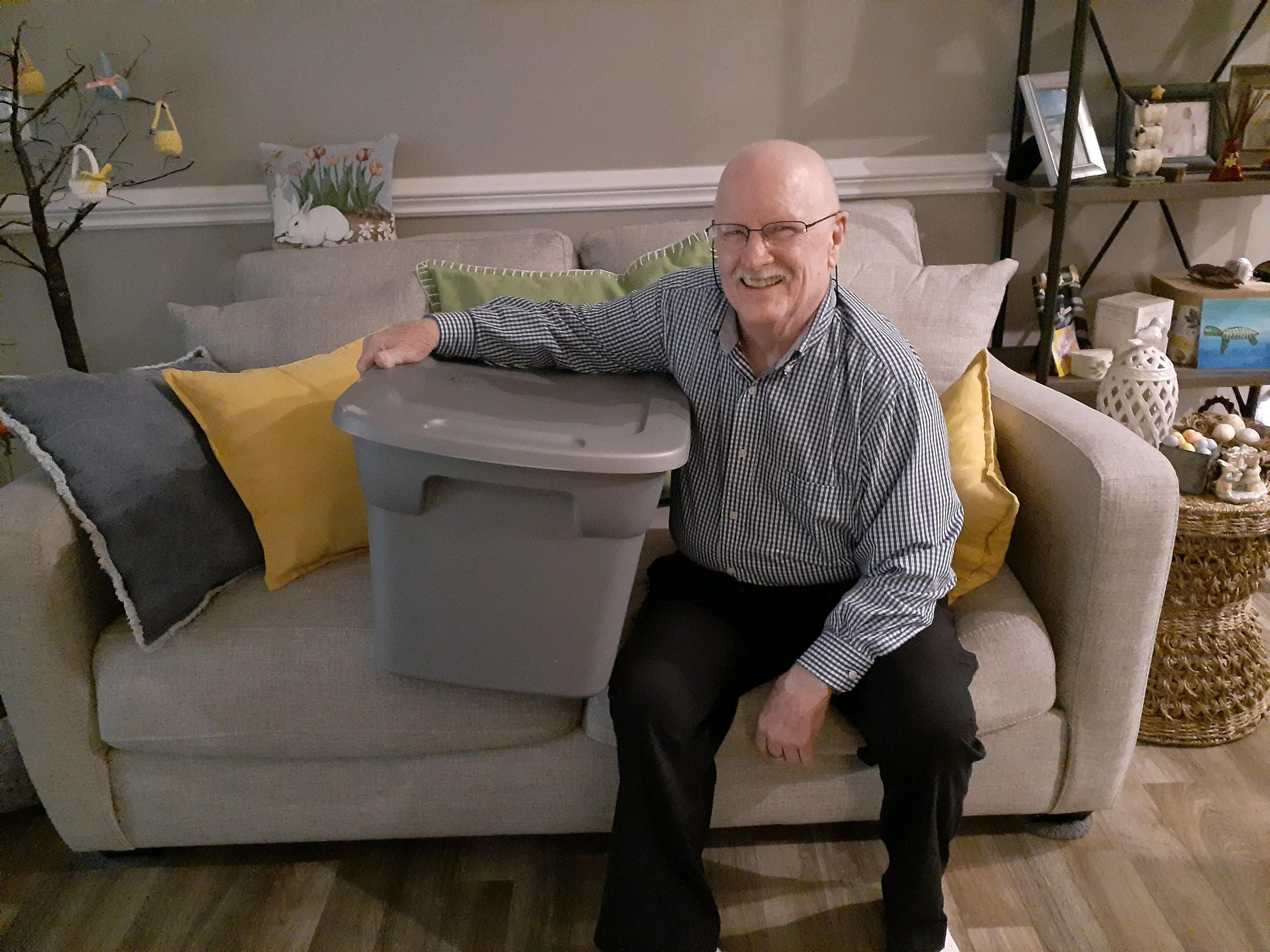 Daddy with his emergency pinto beans

The pinto beans in question, those same legumes so blithely shrugged off by my mama, who was too busy to be bothered with such matters as she was cleaning out her enormous fabric stash in the spare bedroom of my parents’ log house, were not exceptional by their very nature, but, rather, by their placement.

They were in a 45-gallon plastic tote. I had assumed that the contents therein were fabric, or at least fabric-related, as our sole purpose in that room at that moment was to thin mama’s vast collection of fabric, patterns, notions, and such. So her answer left me more than a little confused.

“Uh huh” I said, trying for the life of me to figure out the answer for myself so I didn’t have to trouble mama, who was now mostly invisible as she dug through a cedar chest of remnants, save for her rear end protruding skyward, a situation that, if made public, would humiliate her to her Baptist core. Wracking my brain, searching through my mental database of facts regarding both my daddy and pinto beans, I was left with no reasonable answer as to WHY my daddy had 45 gallons worth of pintos in a lidded plastic tote, or why my mama was so nonplussed by the fact.

Finally, fearfully, I spoke. “Mama? Why does Daddy have so many pinto beans? And why are they in a huge storage tote? And why on earth are they upstairs in the spare bedr…”

I was abruptly (and rather rudely) cut off as Mama popped back up out of the chest like a kid in a Halloween apple-bobbing contest who had victoriously chomped a Red Delicious and had to surface for air.

“Well, you know how your Daddy is!” she said, now throwing her hands high in the air with exasperation, as though Jesus himself understood my daddy’s eccentricities, and therefore sympathized with her current plight of being interrogated about pinto beans when there was a decade’s worth of fabric to be organized.

I did, in fact, know how my daddy was. He was a wonderful man, educated at fine schools, charming, and funny, and, well, a little weird. My childhood had been chock full of strange stories he would make up and unexpected moments like when he showed up out of nowhere with racquetball equipment, declaring it to be the “sport of the future” that we must all absolutely learn immediately lest we be shunned from polite society. He collected weird little gewgaws and read Tolkien so, yes, I was aware of my daddy’s somewhat unorthodox ways.

But pinto beans were a new one.

Come to find out, they were part of Daddy’s stockpile for Y2K. Y’all remember Y2K, when the world was gonna end because the computers that could process complex information at the speed of light were gonna be rendered as useless as screen doors on a submarine over a date change and all the nuclear codes would be activated at once? Well, I’m guessing in 1999, Mama had been too busy with her work and personal life to mind Daddy closely enough and he got real deep into some apocalyptic conspiracy theories and was convinced December 31, 1999 was the last day of our existence. (It’s worth noting here that this particular story I am relaying took place in 2017, but those things never expire, so in the final days of our world it’s just gonna be cockroaches and pinto beans.) 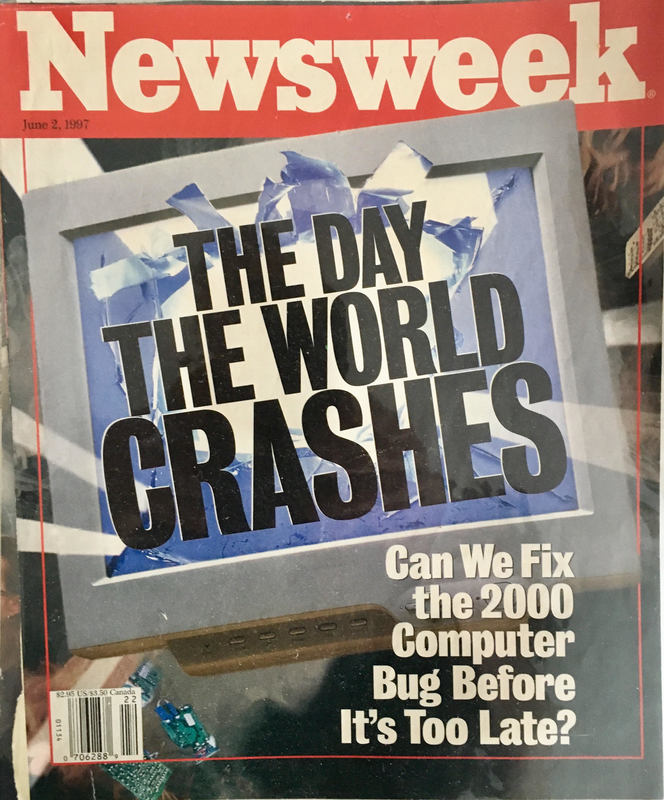 Anyway, Daddy’s answer to the looming crisis was to buy pinto beans. Lots of ‘em. From the local wholesale food club, where I have no doubt he explained in great detail to the workers how he was planning for the inevitable End of Days that was fixing to be wrought upon us all. Bless his heart.

I do like to imagine my parents in the smoldering ruins of their home, ash covering everything in sight, a barren, devastated, dystopian, post-Y2K landscape.

There’s Mama, in her apron, insisting Daddy go to the neighbors’ house so he could raid their refrigerator for buttermilk because, apocalypse or not, no Southern person should be forced to endure pinto beans without cornbread. (“They’re probably dead, anyway,” I could hear her say “as much sense as they had, driving them ATVs at all hours of the day and night and drinking whatever was in those mason jars and carrying on. Probably passed out before midnight anyway…”)

I pictured Daddy, smiling smugly as he ladled those beans into his dusty bowl, content in the knowledge that his 45-gallon tote of those lifesaving legumes would help civilization itself to endure at least a little longer. (In this scenario, Mama was silently thankful that the removal of the roof during the Great Destruction had provided the kind of ventilation that a family subsisting on pinto beans would surely require.)

It shouldn’t be surprising, though, that a good Southern man like my daddy would think to have a Southern staple stockpiled for any unforeseen emergencies. Folks south of the Mason-Dixon live through our food; it’s who we are. Example: my mama can have a casserole prepared from scratch and wrapped in tin foil in the time it takes her to read an obituary.

Because what says “My deepest condolences on the loss of your great-uncle once removed on your mama’s side; the Lord’s blessings be upon you” like a broccoli rice casserole made with off-brand Cheez Wiz? Food is where we find comfort, and how we show love.

Speaking of love (or lack thereof), I will confess to one act of Southern culinary heresy from my childhood. As Mama tells it, she received a call from Miss Joan, my K4 teacher, during the middle of the day. The timing initially worried her, but come to find out, Miss Joan just wanted to apologize to Mama. It seems she had instructed me to eat my lunch, which was a dish of chicken and dumplings.

Y’all. I am as Southern as RC cola and dating your cousin, but my young eyes took one look at those misshapen beige lumps of dough in a sauce that looked like it came from someone’s sinus cavities, and pledged that Hell would freeze over before I ate whatever it was.

A battle ensued. Little did Miss Joan know that one of my most well-developed characteristics, even at the tender age of four, was stubbornness. Miss Joan begged. She pleaded. She wheedled, cajoled, bribed, hectored, and finally demanded that I eat the repulsive stuff. Figuring whatever punishment, I would receive must still be preferable to eating what looked, frighteningly, like biscuits in snot sauce, I picked up handfuls of the warm goo and hid it where even that badger Miss Joan would surely never find it. The bib pocket of my overalls. 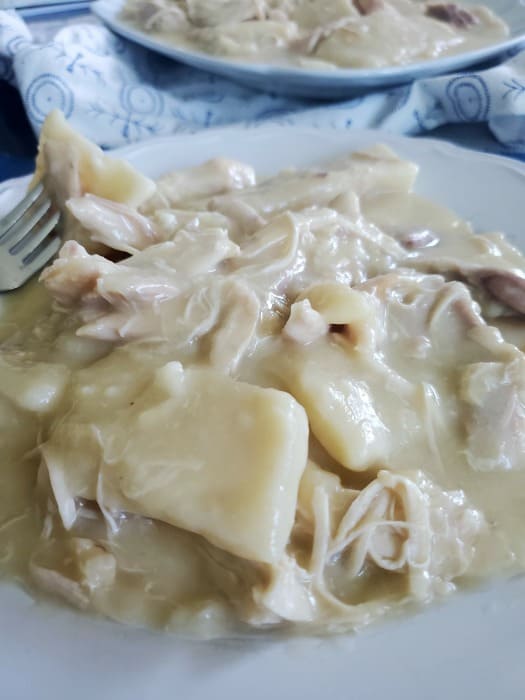 So that phone call to my mama was Miss Joan’s way of apologizing, and doing so before Mama inevitably found out about the incident on laundry day. Then, according to Mama, Miss Joan vowed solemnly “I swear, I will never try to make that child eat chicken and dumplings again.”

There are other atrocities of Southern cuisine that bear mentioning, one of the most egregious examples being “pear salad.” I love explaining this particular dish to Yankees, because they seem certain, based on the pleasant sounding name, that it can’t be as bad as all that, and they’re right. It’s worse.

Picture, if you will, a bed of crisp iceberg lettuce. Now top it with a halved pear from a can. So far, so good. But the next part is what has me convinced that pear salad was, in fact, a nefarious invention of Northerners to weaken the constitutions (and will to live) of us Southerners. Atop the pear half, add one generous dollop of…Duke’s mayonnaise. 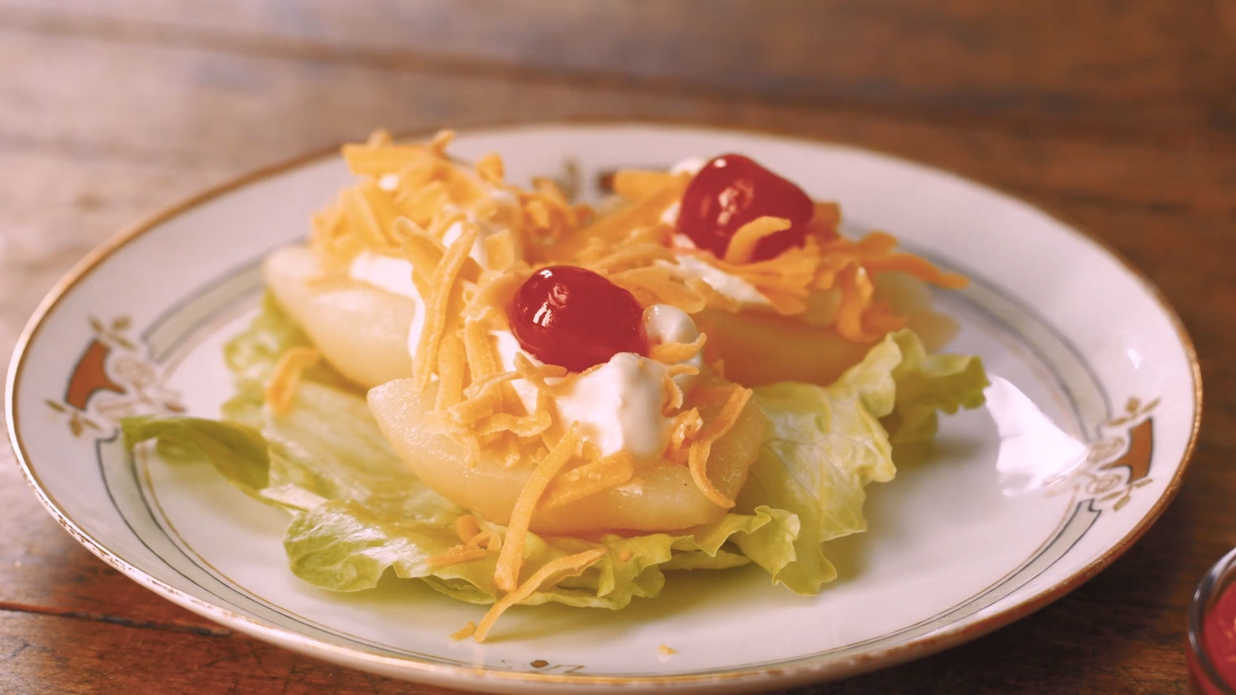 Now, I am one of those passionate types who would give full-throated support to a Congressional decree naming Duke’s mayonnaise a food group unto itself. That said, perhaps the only place the delicious condiment has no business being, is atop a pear half.

It gets worse. The mayonnaise dollop is then liberally sprinkled with…wait for it…shredded cheddar cheese. Now at this point, at best, we have an abomination created by some poor soul in the throes of a really bad moonshine hangover, but here’s the topper, literally. A maraschino cherry. Rounding out the motely assortment of ingredients, none of which have any right associating with one another, is a plump, unnaturally red cherry. The funny thing about pear salad, though, is I remember thinking it was such a glamorous dish. Which goes to show, it’s all about marketing and product placement. Mama would break out the fine china and serve this atrocity during special occasions, which, I suppose, blunted my senses to the true horror of it all.

All in all, though, you’d be hard pressed to find any better cuisine than what us Southern folk cook up. Whether it’s jambalaya from the Bayou or apple stack cake from the mountains of Tennessee, we are people who have been forced by circumstance to be creative with our cuisine through the centuries. Our dishes and flavors speak of our cultures, from the Gullah gumbo to the pastries of the German/Swiss Carolina settlement areas, and the diversity of the South is deliciously reflected in its cuisine.

Now, I don’t know about y’all, but all this talk about food has made me downright ravenous. Wonder if Daddy still has some of those pinto beans…

Be the first to comment on "Daddy’s Pinto Beans" 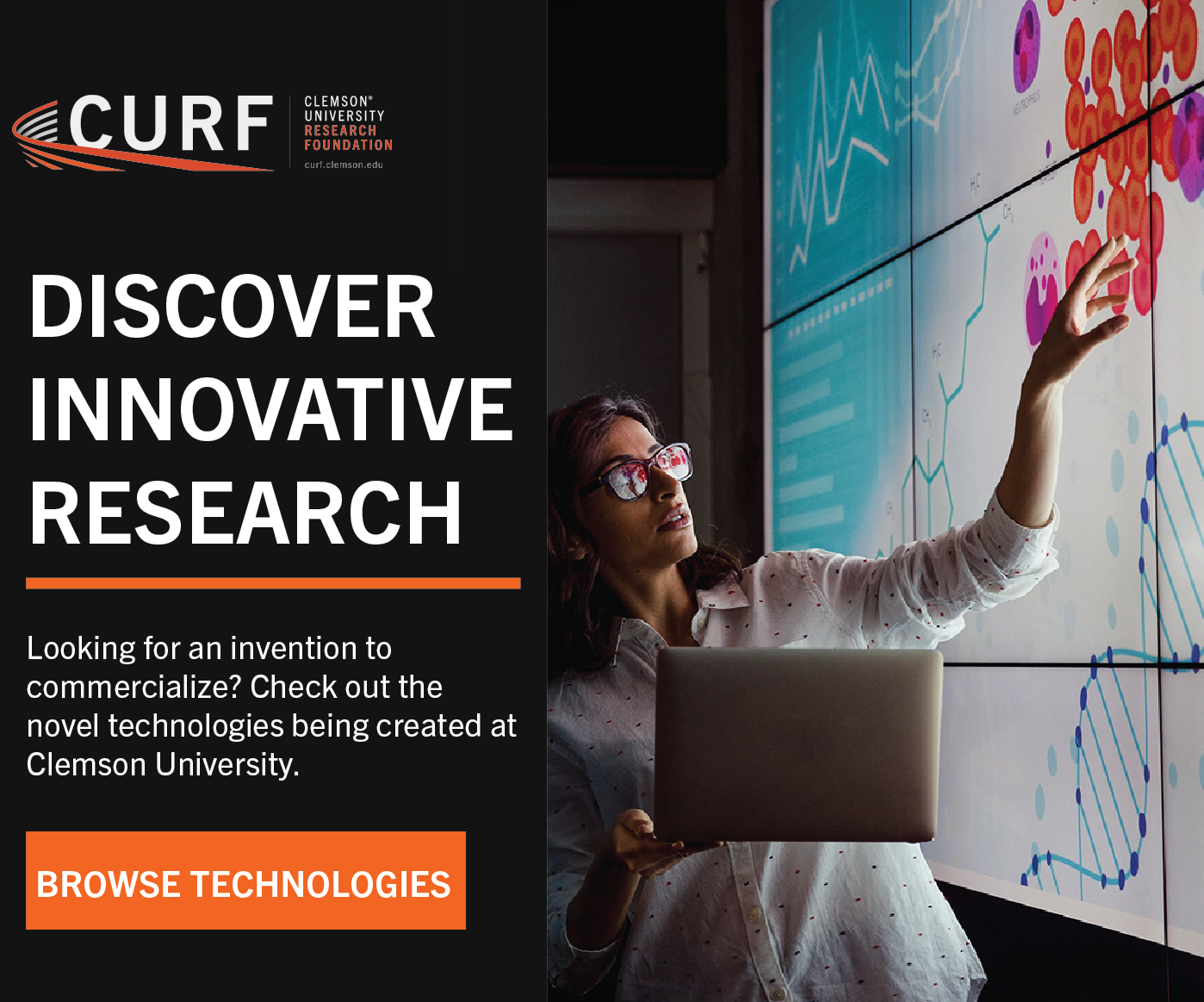