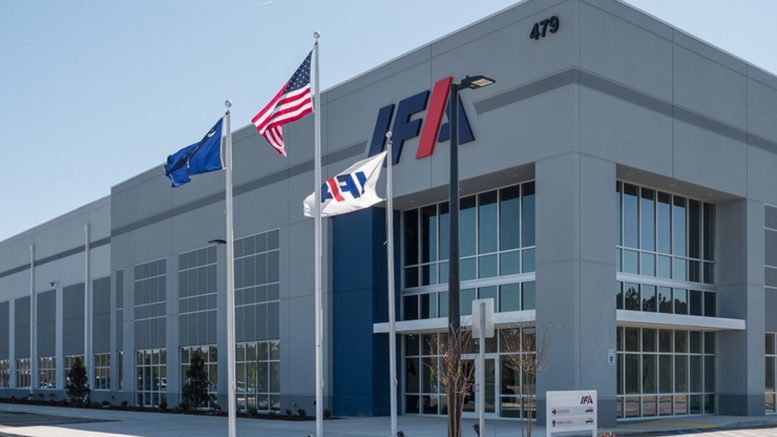 Industry 4.0 is transforming the manufacturing industry at a remarkable rate, and South Carolina manufacturers are being faced with decisions on how and where to get started. Opinions vary on the best approach to begin, but there is general consensus – all manufacturers should get started … soon!

In the past two years the OpExChange provided many plant presentations and tours from member companies displaying different facets of Industry 4.0 – from utilizing Hoshin Kanri to deploy across an enterprise to implementing collaborative robots to automate repetitive tasks. In the OpExChange plant tour on June 29, IFA in Summerville shared their Industry 4.0 progression through digitization of their operations.

The 420K square foot facility in Berkeley County employs approximately 550 people and produces propeller shafts and associated joints for the automotive industry. Their operations were expanded in 2021 to consolidate processes from another facility. IFA’s customer base is impressive and includes automotive manufacturers such as BMW, Mercedes, General Motors, and Volkswagen. IFA is actively designing and preparing their operations for the “half-shaft” which is used in electrical vehicles.

Lu Reckmann, President and CEO of IFA North America welcomed the OpExChange team and provided an overview of the IFA corporation. He also provided an outline of their digitization efforts which began in 2020. A primary goal for this project is to implement traceability of parts and the ability to recall process data from a component’s serial number. Lu shared that they are in still in the intermediate stages of their digitization project.

There are three phases of this project which include converting their operations to a production order system, rolling out a new manufacturing execution system (MES), and implementing traceability within the new MES system. Christian Knips, Senior Digitization Manager, and Daniel Stiel, Logistics Manager, provided deeper dives into each of the three phases of this project. The OpExChange team were then given a tour of their operations with demonstrations of project implementations.

Prior to this project, IFA utilized the repetitive manufacturing methodology with their ERP system. Parts were produced by part number and were not associated with a particular order. A material backflush transaction was performed at the end of the operation when the final assembly was completed. IFA leadership realized that there were multiple benefits possible from moving to a discrete production order system. Daniel shared that traditional value stream mapping techniques were utilized to determine optimal backflush points within the assembly process. Supermarkets were established on the production floor and min/max levels were generated for all raw materials. A target of four hours of inventory was established for all materials. A mother/daughter tugger train system with defined routes was implemented to supply operations. This phase of the project was completed in mid-2021.

Phase 2 – Manufacturing Execution System roll-out
A good MES goes beyond standard material supply and production planning associated with an ERP system. It manages and optimizes actual shop-floor process and operations, in real-time. IFA chose FORCAM as their MES provider. FORCAM is a Germany based information technology company, specialized in production control and the Industrial Internet of Things (IIoT).

Christian shared that a key objective of this project was to minimize much of the manual data collection, reporting, and resultant Excel “Monster” spreadsheets production folks were generating. These took people a fair amount of time to update and were prone to human error.

Paramount in this phase was machine connectivity. As they installed equipment and laid out the shop floor, every piece of equipment was connected to the network and to the MES. This provided the infrastructure necessary for automatic process data collection. Currently, specific process data with machine status is uploaded every second. From this information, key process indicators such as overall equipment effectiveness, downtime, availability, cycle time and process performance are automatically generated. Christian stated that 95% of the manual spreadsheets and associated labor have already been eliminated.

A benefit of the FORCAM system is that it not only calculates throughput, but it also captures actual non-productive time – both planned and unplanned. Any duration greater than two minutes necessitates the operator selecting downtime reasons, with the ability to annotate with additional comments.

This phase of the project was completed in early 2022. Christian added that continued improvements are being made to automate additional KPIs such as mean time to repair (MTTR) and mean time between failures (MTBF).

Phase 3 – Traceability
Product traceability is extremely important to automotive OEMs, and many are requiring this from their suppliers. When researching a component failure, being able to analyze the process data when the part was produced is a huge benefit. In the unlikely event of a product recall, being able to zone-in on specific production orders can minimize cost and the time to a resolution.

The FORCAM “Track and Trace” capability will provide  IFA not only the ability to research quality issues but also to improve process control. Subsequent processes can check the status of previous operations to ensure that all operations were successfully completed before continuing the current operation.

Each machine currently uploads process data to an SQL database in a simple text file, which is stored in a local file server and is then uploaded to a global cloud database.  All of this is queryable in an inhouse created web interface (MDV – Machine Data Visualization ).

This final phase of the digitization project is underway with expected completion in 2023. 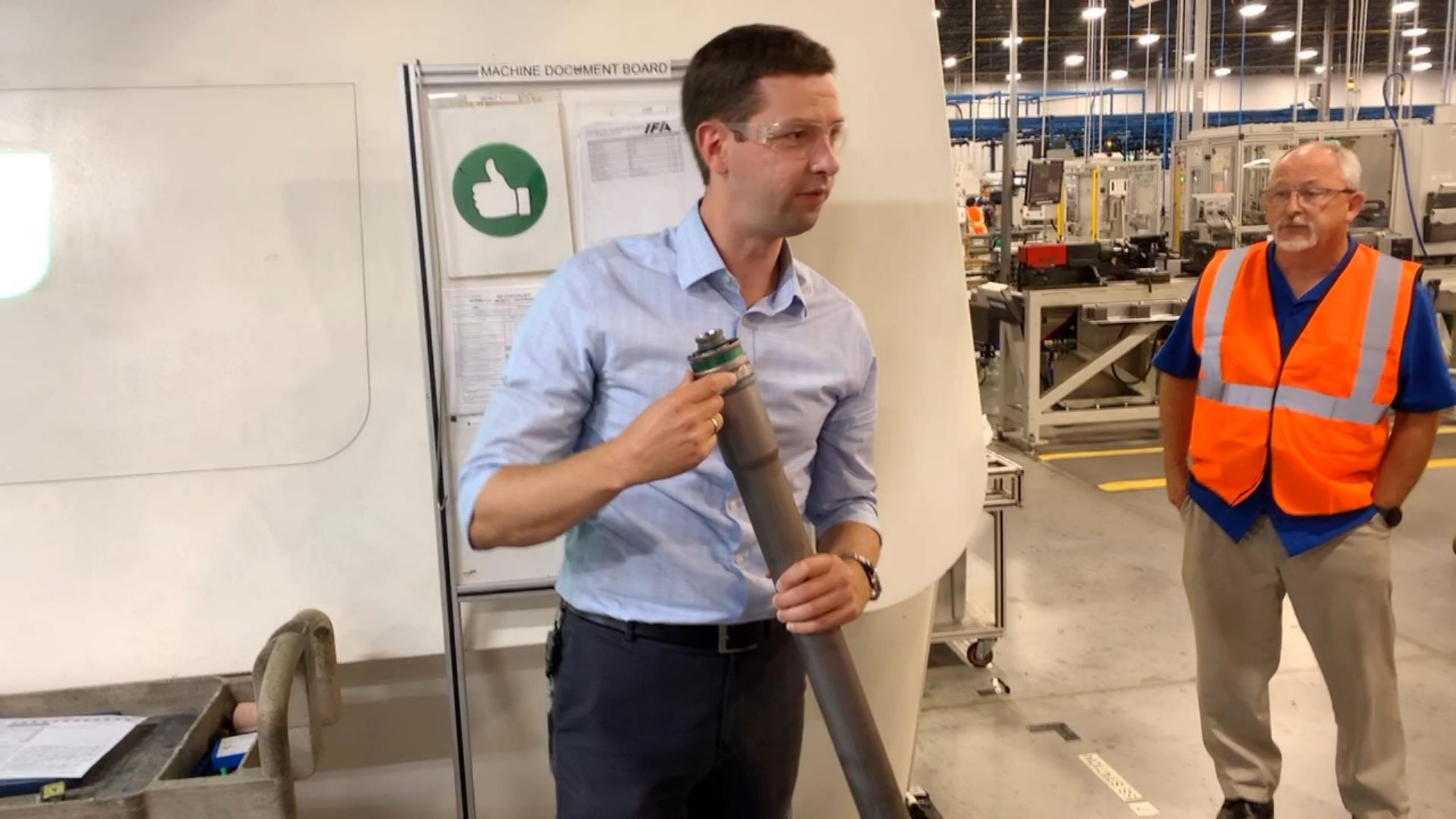 Plant Tour
After the presentations, the group broke into smaller groups for an interactive plant tour. The facility was remarkably organized, bright, and clean. One of the participants commented that the site still has that “new plant smell.”

Four tour stops provided demonstration of the production order system, replenishment of supermarket kanbans using tugger trains, Traceability input into the system, and a demonstration of how Microsoft Power BI is utilized in the daily cascading reporting system.

Many of the OpExChange participants were particularly impressed with the ancillary Power BI application developed at the Summerville site. Todd Sharpley, Operations Manager for IFA, demonstrated how they are not just collecting data, but are taking action based on what the data tells them. Todd stressed that the data “is not going to do us any good if we are not making good decisions and driving right actions.”  Prior to this, they were dealing with paper Pareto charts and historical data. Now, they have real-time access to FORCAM data with digital generation of Pareto and trend charts. A large touchscreen display on the shop floor provides quick Pareto detail with drill down ability. Todd demonstrated an impromptu drill down into downtime by machine and by reason codes. This format is now used in their daily production meetings on the floor. 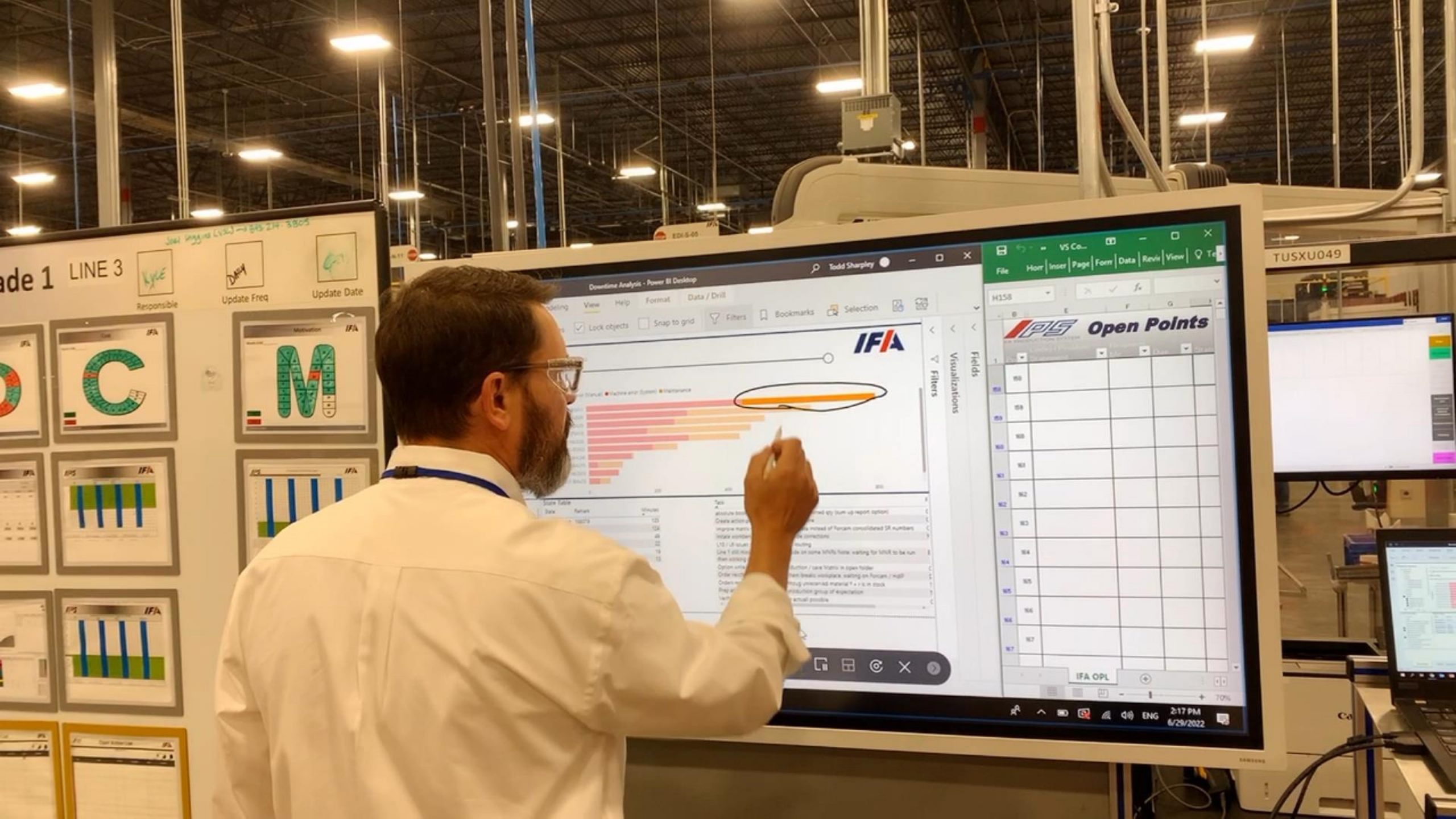 Next Steps
The IFA team shared that they have already seen great improvements in WIP, inventory accuracy, and productivity from phase 1 and 2 of their digitization project. The reduced time collecting data manually afforded them the ability to spend that time more proactively. The traceability portion is well under way and should be complete in 2023.

The quick accessibility to process data has the team excited about the possibilities for future improvements. They have plans on tying in their maintenance work order system later this summer. IFA is also partnering with an artificial intelligence company to gain further insights into process data and predictive analytics.

About IFA
IFA Group is a rapidly growing automotive supplier, with core competencies in drive shafts and joints. They are within the global top three among drive shift manufacturers, delivering to all car manufacturers in Europe, Asia, and North America. Corporate headquarters are based in Haldensleben, Germany with sales, engineering and production presence in Germany, USA, China, and Poland. The IFA plant in Summerville employees approximately 550 people and has been an active member of the OpExChange for nearly nine years.

About OpExChange
The OpExChange, sponsored by the South Carolina Manufacturing Extension Partnership, is a peer-to-peer network of companies in South Carolina known for generating success for members through benchmarking and best practices activities. Member companies host events and share practical examples of industrial automation, lean manufacturing improvements, and leadership development. It is an invaluable resource to South Carolina companies that provides access to others who are on similar improvement journeys. If you are interested in joining, contact Mike Demos (Mike@OpExChange.com) or visit the OpExChange website www.OpExChange.com.