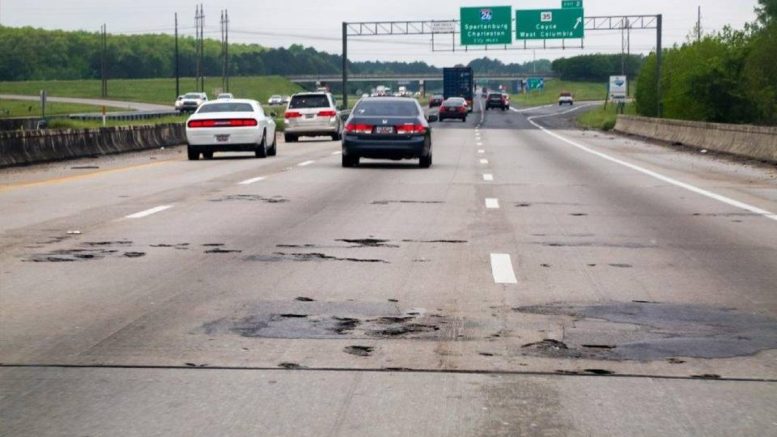 For the past six years, economists say, South Carolina has doubled job growth in manufacturing – partly due to South Carolina’s roads.

But a failure on the part of the South Carolina legislature to act on fixing South Carolina’s crumbling infrastructure could impact the economic well-being of some industries, but also have a negative impact on attracting future industries.

Failure to fix the roads, Von Nessen said, could cause South Carolina to lose its competitive edge in attracting new manufacturing business to the state as it competes for companies against states like North Carolina, Alabama and Texas.

“If South Carolina builds a reputation for not maintaining our infrastructure, it could cost us businesses coming to our state,” he said. “It’s like a house. If you’re trying to sell your house, you have to maintain it in order to preserve its value.”

Legislation to improve South Carolina roads passed through the Senate in early April. On April 26, the Senate approved more than $2.2 billion to be spent on roads. But that seems to be little compared to the $1 billion per year the Department of Transportation says it needs to bring state roads up to good condition, as well as expand and build new highway to keep up with population growth.

In the meantime, roads continue to deteriorate. The state estimates it has paid out more than $40 million in damages claims from vehicle owners who say the damages were caused by road problems.

Individual car owners aren’t the only ones whose vehicles are being damaged. Truck drivers said problems with the roads costs them millions each year.

“Current and deteriorating Conditions create an unsafe, hazardous environment for our industry’s workers, motorists in general, and inefficient operations impacting the supply chain across the board,” said Rick Todd, president and CEO of the South Carolina Trucking Association. “Delays, detours and bottlenecks burn our driver’s limited hours and fuel. Congestion causes accidents and losses, where we are vulnerable to excess liability exposure. Potholes increase maintenance costs.”

Fixing the roads would require more than just money, Todd said, but a reform of the Department of Transporation, and a way to generate funds through user fees.

“Per capita we have much less available for road investments than our direct-competitor states,” Todd said. “We have a better handle on our bridges than many states, but still too many in jeopardy, or posted for detours. It is no secret, and I hear loud and clear that our roads are deteriorating rapidly, and capacity is strained. Only money will fix it, and “reforms” -no matter how substantial they may be – cannot be expected to solve the challenge.”

Unless fixes to the roads are made soon, economic problems could be just around the corner. In November 2014, Michelin North American President and CEO Pete Selleck said his company would not be able to expand further in South Carolina if the roads were not fixed.

Greenville-based Michelin has 10 South Carolina plants. Michelin is one of many organizations, including the South Carolina Chamber of Commerce, pushing for the Legislature to find the $42 billion needed to fix the state’s road problems over the long-term.