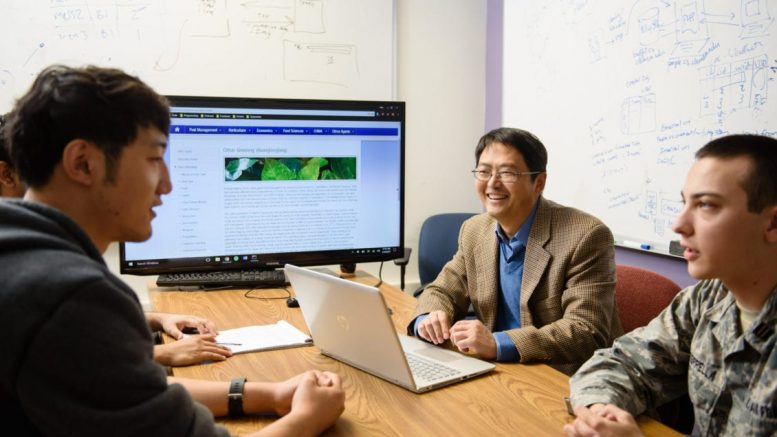 One of Clemson University’s highest academic honors is going to Feng Luo, a professor in the School of Computing and founder and director of the Clemson Artificial Intelligence Research Institute for Science and Engineering (AIRISE).

Luo has been appointed to the Marvin J. Pinson, Jr. ’46 Distinguished Professorship in Artificial Intelligence.

As the director of AIRISE, Luo is helping bring together more than 90 faculty members from across the University to create new, interdisciplinary AI research and education programs. Clemson researchers have deployed artificial intelligence for a host of applications, ranging from improvements to the K-12 education system to diagnosing Alzheimer’s disease earlier than currently possible.

Luo’s own research has also applied artificial intelligence to a broad range of challenges.

He and his team are using AI to combat citrus-greening disease, which poses a serious threat to Florida’s citrus industry. The research is funded with a $4.3-million federal grant that Luo and his team received in 2017 from the U.S. Department of Agriculture’s National Institute of Food and Agriculture.

Luo and another group of collaborators have also used artificial intelligence to create MCDefender. The system can effectively detect and prevent cyberbullying on social media, even if the messages contain misspellings or words that may not be offensive individually but carry a potentially hurtful message when strung together.

More recently, Luo and a team of collaborators developed an AI system to detect malware inside devices that are connected to the internet but don’t have enough memory for anti-virus software and other usual means of protection. The system, DeepPower, watches for power usage patterns and employs deep learning to infer whether an attack is happening inside the device.

Amy Apon, the C. Tycho Howle Director of the School of Computing, said that Luo is highly deserving of the professorship.

“Dr. Luo’s leadership role is helping Clemson strengthen its research in artificial intelligence and provide a wide range of new opportunities to prepare the future workforce with the latest knowledge in the field,” Apon said. “His own research and teaching have set the bar high. I congratulate Dr. Luo on the professorship and thank Marvin J. Pinson for his forward-thinking support.”

Anand Gramopadhye, dean of the College of Engineering, Computing and Applied Sciences, said the professorship helps recognize Luo’s outstanding work while positioning him for future success.

“Endowed professorships help us attract and retain scholars par excellence,” Gramopadhye said. “I offer my wholehearted thanks to Mr. Pinson and his family for making it possible for us to offer the Marvin J. Pinson, Jr. ’46 Distinguished Professorship in Artificial Intelligence. I also congratulate Dr. Luo on this richly deserved honor.”

Luo added: “The Marvin J. Pinson, Jr. ’46 Distinguished Professorship will play an important role in our efforts to advance research in artificial intelligence and offer new educational opportunities to our students. AI is a fast-growing field that is already having broad societal impacts. I thank Mr. Pinson for his long-term vision. His gifts are helping secure the future for Clemson in this fast-growing field.”

Pinson graduated from Clemson in 1946 with a degree in textile engineering. He served in the Korean War and then went on to a highly successful career in the textile industry, witnessing first-hand how computers transformed the business.

After retirement, Pinson taught a three-credit management course at Clemson. His contributions to the endowment that funds the professorship total $600,000.

“I find it very meaningful to give back, whether financially or by volunteering,” he said in a phone interview from his Greensboro, N.C. home. “I think this helps the people who are the recipients and also helps the people who are giving back. This is a very important part of leadership and in how we conduct our lives.  The inclusion of AI in computer engineering and computer science are disciplines is the wave of the future.”

Proceeds from the endowment can be used to supplement the salary of the faculty member holding the professorship, along with a range of other expenditures ranging from research support to student assistance.

In addition to the professorship, Pinson has provided funds for student scholarships in computer science and computer engineering.

Marvin J. Pinson grew up in Greenwood & Spartanburg, South Carolina. He graduated from high school in Spartanburg and chose Clemson University in part because it was an affordable, in-state school. He graduated from Clemson in 1946 with a degree in textile engineering and then went to officer-candidate school at Fort Benning, Georgia, where he was a distinguished graduate. He served in the Army infantry in the Korean War and then went on to a highly successful career in the executive ranks of the textile industry. Pinson retired in the mid-1990s. He has been a generous supporter of Clemson University’s students and faculty, providing both time and treasure. Pinson is married to Lorynn Pinson. He had three children with his first wife, Jerry H. Pinson, who passed away. Their children are the late John Hudson Pinson, David Michael Pinson and George Frederick Pinson. Marvin Pinson has four grandchildren and six great-grandchildren.

Be the first to comment on "Feng Luo appointed to the Marvin J. Pinson, Jr. ’46 Distinguished Professorship in Artificial Intelligence"