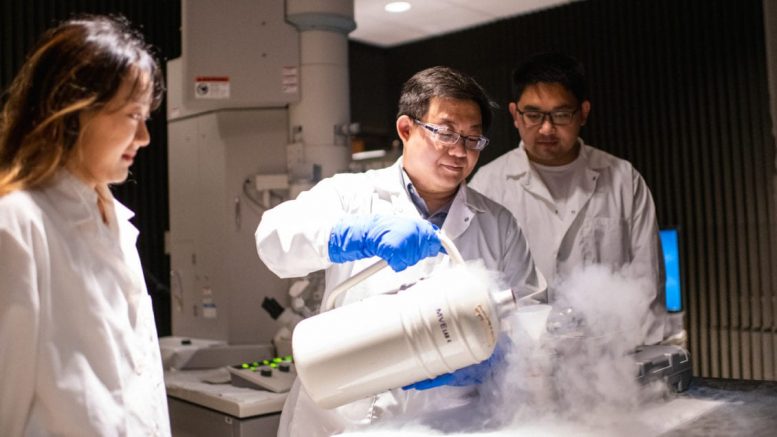 Two Ph.D. students watched Kai He slip on blue, protective gloves and pour liquid nitrogen into a barrel-shaped vessel, causing chilled vapor to billow over the top and spread across the table like a fog.

He, an assistant professor of materials science and engineering, was in Clemson University’s Electron Microscopy Facility to demonstrate some of the research he and his team will be conducting into the rapidly evolving field of quantum spintronics.

Researchers in the field are exploring how the spin of electrons could be used to process data and exchange information. It would fundamentally change how computers work, allowing them to run faster while using less energy.

“This could revolutionize the future in information technology,” He said.

The U.S. Department of Energy’s Office of Science is providing $750,000 through its Early Career Research Program to fund the project.

Spintronics could help overcome the limitations of Moore’s Law, He said. The law holds that the number of transistors per silicon chip doubles about every two years and is why devices have continuously shrunk while increasing in computing power.

But transistor chips are reaching their physical limits, and many researchers believe Moore’s Law is coming to an end. To continue shrinking device size while increasing power, alternative technologies will have to be found, and spintronics is a promising one, He said.

He said that what makes his research unique is his extensive training in electron microscopy and the world-class facilities he and his team will be using in the Electron Microscopy Facility.

The researchers will look so closely at quantum materials that they will be able to see individual atoms and the patterns their magnetic moments form, a phenomenon called topological spin texture. 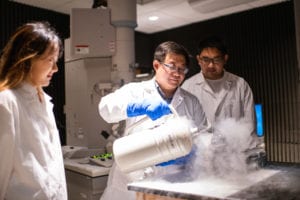 “We hope that we can first understand how the physics work on the fundamental level and then we’re going to use that knowledge to implement them in possible device applications, such as spintronic devices,” He said.

The essence of the project calls for He and his team to use liquid nitrogen or helium to super-cool materials before looking at them in electron microscopes. This Nobel Prize-winning technique, called cryogenic electron microscopy, will allow researchers to see unique spin textures, He said.

Kyle Brinkman, chair of the Department of Materials Science and Engineering, congratulated He on landing the grant.

“The DOE Early Career Research Program supports outstanding researchers early in their careers while they are doing their formative work,” Brinkman said. “As the first faculty member receiving this prestigious award in the department’s history, Dr. He is highly deserving, and he is well positioned for continued success.”

The grant will support one post-doctoral researcher and one graduate student, giving them a chance to work in a cutting-edge field. As of June 2021, both positions were open, and He was recruiting for them.

Xiner Lu, a second-year Ph.D. student, said that working with He is helping prepare her for a career in industry.

“Dr. He is very hard working,” she said. “You can find him when you have questions, and he will give very good advice.”

In the new project, He and his team will be focusing on two-dimensional van der Waals materials. The materials exhibit exotic properties, holding great promise to be integrated into existing silicon technology for use in devices.

“The goal of this research project is to identify, understand and manipulate the topological spin textures in two-dimensional van de Waals materials and elucidate the underlying spin-orbit, spin-lattice and spin-charge interactions using cryogenic electron microscopy and vibrational spectroscopy approaches,” according to the public abstract of the project.

“More specifically, the research will determine the topological charge and spin configuration of the topologically protected quasiparticles and clarify the underlying spin-lattice and spin-phonon coupling mechanisms.

“The findings will facilitate the desirable manipulation of topological spin excitation and spin transport dynamics via the control of external magnetic and electrical probes, providing practical implications and design principles for future spintronics and quantum information technologies.”