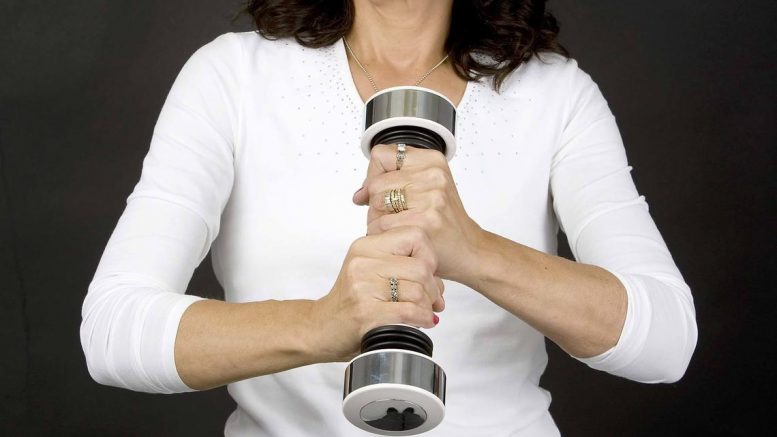 I tell you that to establish early on in this tale that I am a sucker.

With childlike wonderment, I have always been transfixed by good advertising and product placement, by loud proclamations of efficacy and spokespeople with unjustifiably-white teeth proffering items and services that just *might* be the best thing since sliced bread. 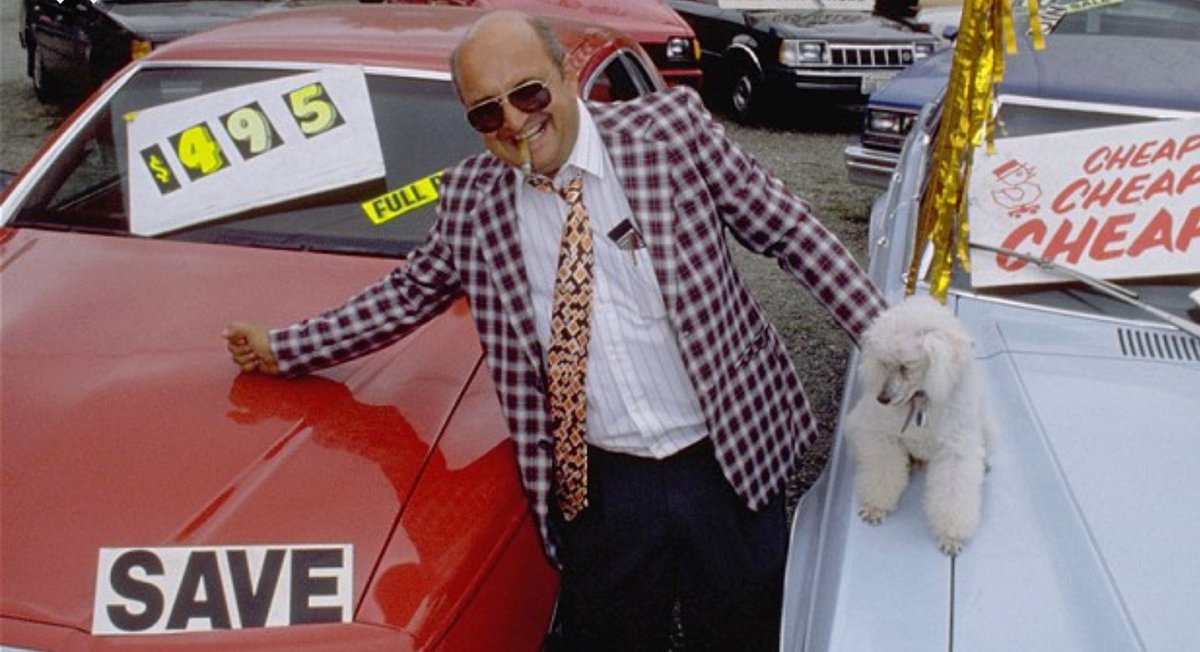 And if it involves something as glamorous as Suzanne Somers in turquoise spandex, then my attention will be nothing short of rapt.

Yes, I owned a Thighmaster, too. Funny thing about those Thighmasters, though.

Ms. Somers, who seems like a sweet girl, failed to properly prepare me for the potential danger posed by utilizing her product while one’s attention wandered (as mine frequently does,) and I spent several weeks nursing a huge shiner as a result of improperly squeezing the device betwixt my thighs while also trying to pet my cat who was wandering by. That cat laughed at me for days. But I digress.

My mama likes to tell how, when I was just a toddler, I would be playing somewhere in the house, would hear a commercial come on the singular television we owned, and would come running in to see what marvelous product was being hawked.

I would settle myself on the braided rug before the massive, wood-encased set, with its two knobs and three channels, and gaze intently at the screen, adjusting the bifocals I wore since age 2, my young mind absorbing the “exciting new features” and exciting-bonus-gifts-if-you-call now enticements. When the commercial, ended, so did my attention, and I resumed my play in the other room.

One particular holiday season, a certain ad touched my very soul in a way that none had before. It spoke to me, to my little 3 year-old heart, with the promise of a magical new technology I had never dreamed possible. Jiffy Pop.

The popcorn that cooked in its own glorious, shiny, silver tin foil (pronounced “tin full” where I’m from) bubble of gleaming promise. Well, I never. 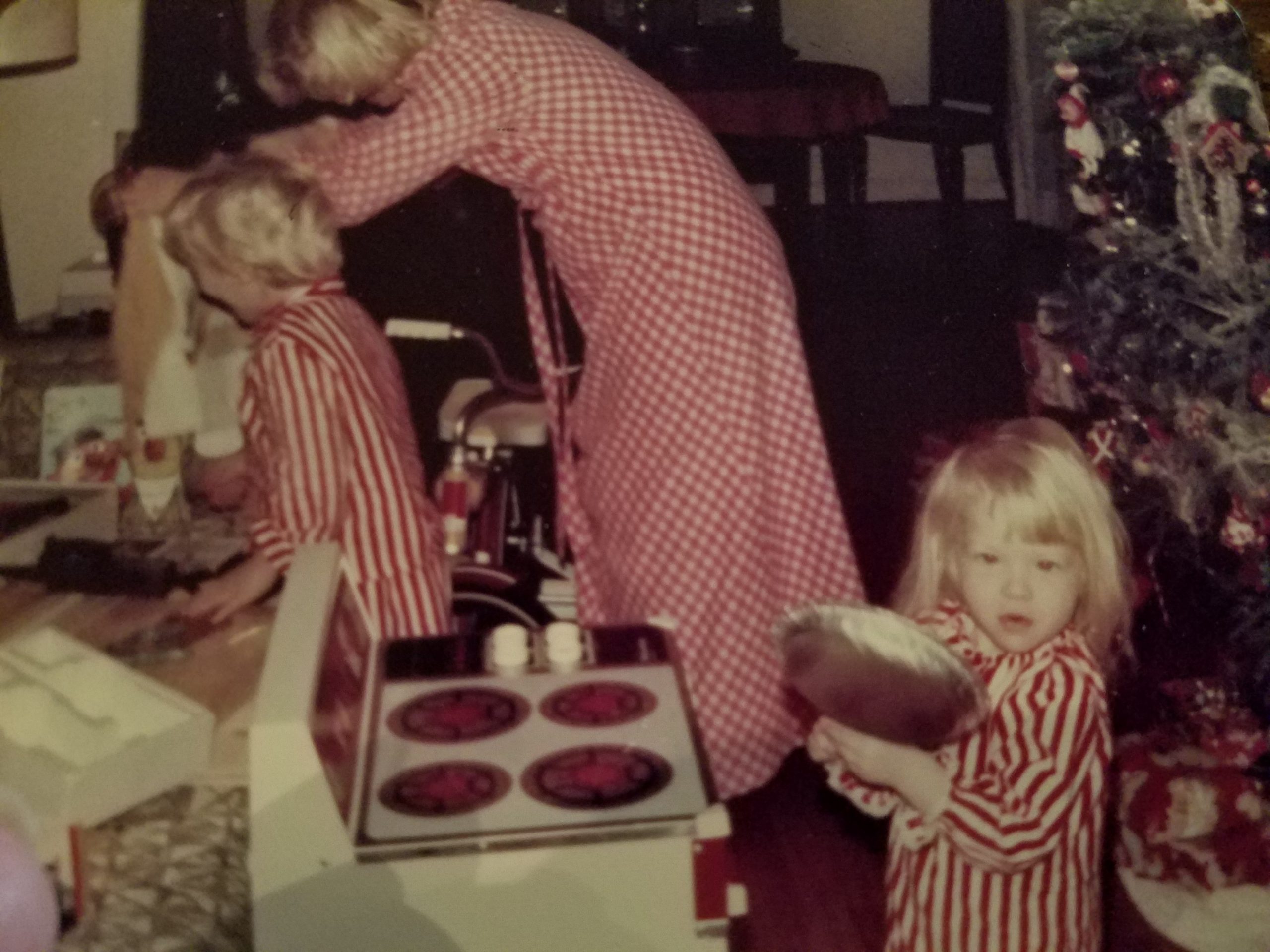 Christmas Morning with my Jiffy Pop

My fevered little mind raced with the concept of self-contained popcorn, awestruck at what modern innovation had wrought.

This was long before the days of microwave bags of popcorn which could simultaneously curb your hunger AND give your face third-degree burns if you were careless in opening it. No, indeed, nothing like Jiffy Pop had graced the shelves of our local Community Cash grocery store, and I was determined to have it.

In my Santa letter dictation to my mama that year, I made clear the fact that numero uno on my wish list was that new-fangled popcorn. No tawdry Simon game, with its flashy colors and frenetic beeping, no Malibu Barbie with what my mama would’ve deemed, with a strategically raised eyebrow that had been known to vaporize a Yankee woman who sported white after Labor Day, “a bit much,” owing to an undue amount of bare plastic skin showing, none of these popular gifts of the late 70s would satisfy the holiday dreams of a small, tow-headed, cross-eyed, country girl. I wanted that popcorn. It had a HANDLE, y’all.

In my fevered dreams, I clearly saw myself, atop the omnipresent stepstool that was never far away in a houseful of well-below-average-height people, proudly grasping that handle and sliding it over the burner as I had seen the happy family do on the commercial. The smiling, well-coiffed mama on that ad assured her children that the Jiffy Pop she had whipped out while they were watching the TV was “as much fun to make as it is to eat!” I intended to test that theory.

She went on to confidently proclaim that that selfsame popcorn, that humble one-ingredient wonder of whole grain, would go so far as to “make watching TV as much fun as going to the movies.” And even though the ad also proclaimed it to be a “family treat,” I knew in my young mind, with the utter certainty of a child firmly entrenched in Christmas rapture, there was not a snowball’s chance in South Carolina that I was sharing my fancy popcorn with my older brother.

He was something of a Philistine, coarse and unappreciative of art and culture, and I just knew he would never appreciate its beauty and innovation the way I could.

So that Christmas Eve, I slept the restless sleep of a child whose fitful brain is fixated on the coming morning, and the promise of rich reward for a year’s worth of good behavior which had been conveniently and nervously compressed into a few panicked weeks in December.

Knowing my mother had amended my Christmas list, perhaps in her embarrassment over her daughter’s peculiar wishes, I tacked on a prayer to my usual repertoire that night the hope that baby Jesus would give Santa the skinny on that popcorn and its top-of-the-list priority status when their paths crossed somewhere in the sky over Tulsa. I was a little fuzzy on how Christmas Eve worked at that point.

Christmas morning came, and my brother and I descended the stairs of the stately old parsonage we were living in, somewhere in the most rural area of northeastern Georgia. My daddy, newly graduated from seminary at Emory, had the daunting task of ministering to not one, but three tiny churches in the area.

Unlike some parsonages in the South, those humble, unassuming brick ranches designed to dignify the honor of the inhabitant’s work without seeming to commit the sin of undue pride, our home was quite grand. My poor mama had no idea how to properly furnish the manse, but Christmas shone everywhere in the space that year.

Especially that morning, as my brother and I, in our matching red and white striped pajamas mama had made the whole family, raced downstairs and found our humble den transformed into a Christmas wonderland. The lights of the Christmas tree were the only illumination, shedding their otherworldly glow on what seemed to be mountains of toys, spanning the length of the endlessly-long living room. 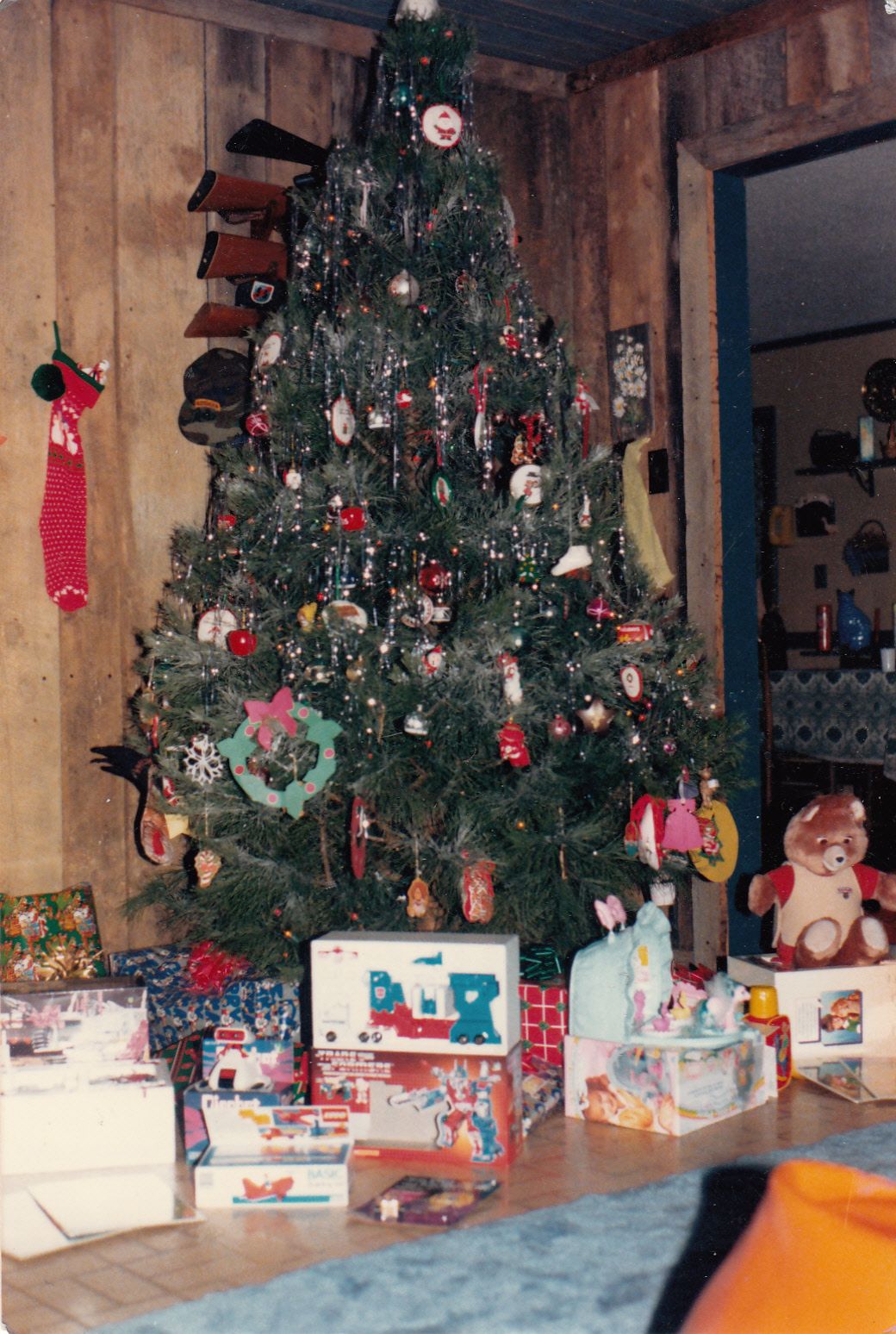 The small, grainy picture that remains of that morning, that moment, shows two small children with disheveled blonde hair, clad in their candy-cane stripe pajamas, descending on the bounty before them. For the boy, my brother Jason, there is a shiny new tricycle and some very desirable Sesame Street items I would later covet in private. For me, an entire miniature kitchen, complete with a combination stove/oven, with eyes on the stove that would really light up. I didn’t care.

Making my way around the pile of gifts, I was single-minded in my search. Even though my vision was compromised, owing to my crossed eyes and habit of forgetting to put on my bifocals in the morning, I recognized a glimmer of silver foil at the end of the couch on one of the floral chintz-covered cushions. It was my Jiffy Pop.

The picture seems to show a small girl rather confused by this unusual Christmas offering, but I know better. I was simply gobsmacked, filled with awe and reverence for what I was sure was the greatest Christmas gift ever given. And even though I had not asked for the play stove, it would provide me with hours of entertainment as I transformed into that smiling, competent mama on the commercial, gliding the Jiffy Pop…MY Jiffy Pop…my “real popcorn” as I had called it on my Santa list…over the tiny “burners” again and again.

Eventually, we would actually put the Jiffy Pop, resplendent in its foil and primary-colored packaging, onto the real burner of the real stove. And I realized my dream of standing on that stepstool and watching that magical inflation of the container until it had puffed to its full, glorious capacity.

And then we ate it. And I remember thinking that the commercial, that 2-minute advertisement that had shaped my entire Christmas experience that year, was wrong. It was not “as much fun as going to the movies.”

It was even better.

Be the first to comment on "I own a Shake Weight"