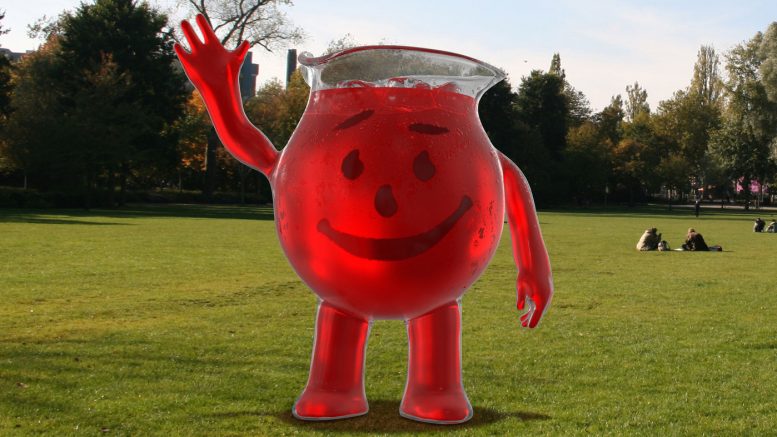 Brick and mortar. Wood and glass. Carpet and paint and wiring and plumbing.

And, in fact, when stripped of the sentimentality that sometimes hangs heavy over a place, Cowpens Baptist Church is, to be sure, only a building.

Why, then? Why the anguish and bitter tears and disbelief upon seeing its demise? Why the instantaneous rush of remembrance, the immediate gut-punch sense of loss as it is consumed by fire in some scene reminiscent of a Biblical reckoning.

Because this is the South, and we venerate our places.

There is even a term for it, used mostly in literary circles and sociology classes: sense of place. Wikipedia defines the term as “a multidimensional, complex construct used to characterize the relationship between people and spatial settings.” That’s a mighty big mouthful to say it’s the way people and places connect. 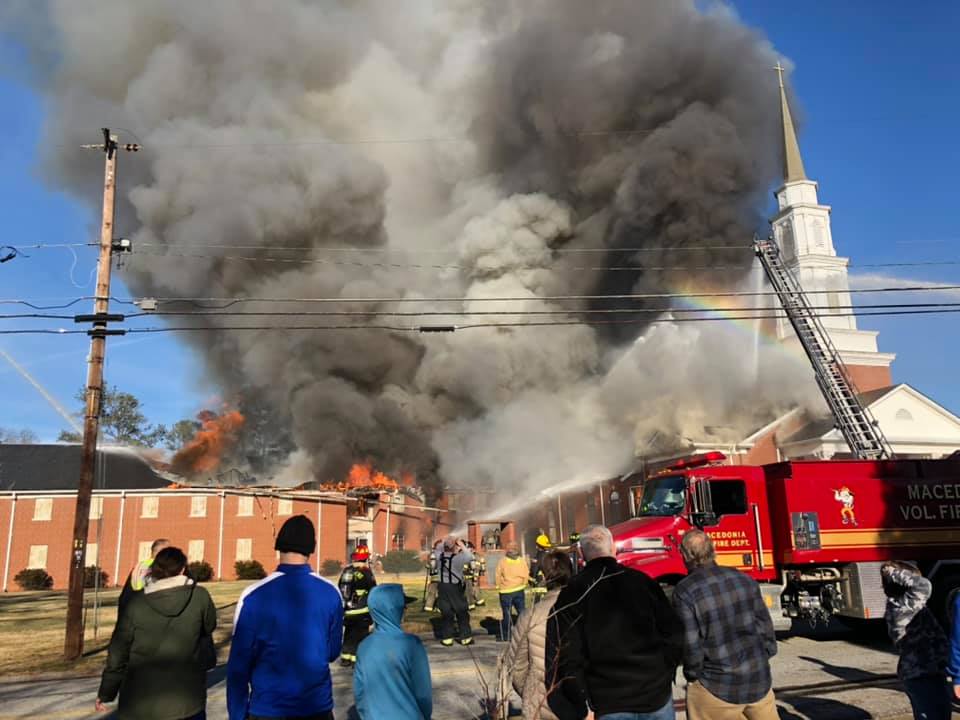 Down South, we use the term “church home” when describing our places of worship. And that’s what it is. Our second home.

And while we, as sons and daughters of the South, may be quite accustomed to the hazy, sometimes invisible, line of demarcation between our homes and our churches, those who migrate here from other parts of the country frequently remark on it.

In speaking with a newcomer one day, she said that every single local she met asked her the same two questions, in the same order: “Where are you from?” then “Have you found a church yet?”

I knew her story to be accurate, because we Southern folks want everyone to have a church home, and we all believe ours is the best one.

And we are all right.

Cowpens First Baptist was not my church home; I’m of the denomination I affectionately refer to as “Benign Methodist.” But Cowpens was my childhood home and that church meant an awful lot to an awful lot of good people.

I wanted to write about it, to pay tribute to the “church home” of many of my friends and even some family. If you read the story and would like to help the church family as they rebuild, donations can be sent to:

Please enjoy “Kool-Aid and Jesus,” and keep the good folks of Cowpens in your prayers.

My best friend, Tina, tried to kill me when I was nine years old.

Well…maybe it was more of an accident, but the way I remember it, I took a nine-iron to the head after Tina assured me it would be an adequate “stake” for a tent we were trying to make. On her trampoline. 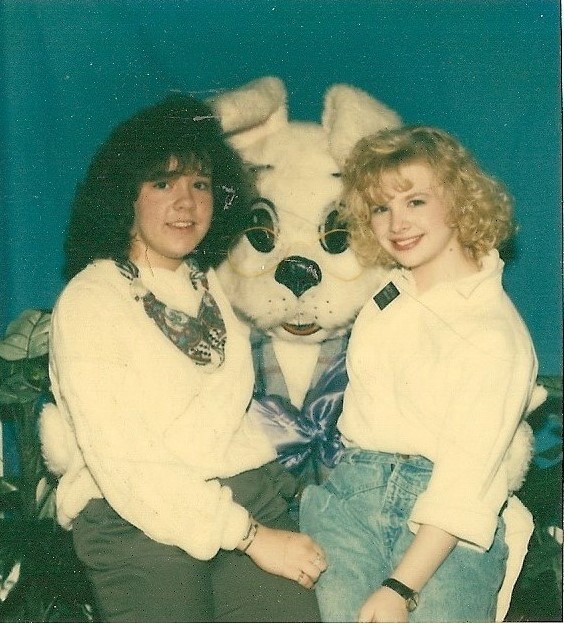 She was awful fancy, I thought at the time, to have a trampoline AND parents who owned a king-size waterbed, but she was apparently not the engineer she considered herself to be, because that golf club we had precariously propped up under a sheet toppled immediately after we got settled on the jiggly mat, and conked me square on my little blonde head. The pain had me convinced I was about to meet the Lord.

Now, if it HAD been my time to meet my Maker, there was no better place to do it than at Tina’s house. Her daddy, Herschel, was the pastor at Central Baptist Church in my hometown of Cowpens, and one of the finest men I knew. A short, spirited, well-coiffed firebrand, sincerely dedicated to saving the mortal souls of as many of his fellow Cowpensians as possible.

Oh sure, my daddy was also a man of the cloth, an ordained Methodist minister, but since by that point he only renewed his credentials to perform weddings, funerals, and the like, his ministry was more like a spiritual “guest appearance” at functions than a REAL preaching job.

And even though he filled in for our regular minister on certain Sundays when the need would arise, my mama strictly forbade him from serving the Lord in too public or frequent a capacity, because one time he talked from the pulpit about the Hanes socks she had bought him for a full five minutes while she sunk lower and lower into the seat of her pew, silently begging him to get to the point…ANY point.

Herschel and his wife, Evelyn, always made me feel welcome in their home, and it always tickled me that Herschel would sit and talk with me for as long as I had something to say. That was usually a long, long time. Somehow, over the years, it became a running joke that every time I visited, I was forced to endure his tale about his most memorable Christmas, a sob story that would make Oliver Twist himself pity poor Herschel.

Even after Tina and I had graduated and gone our separate ways, Herschel called me a handful of times over the years at Christmas to tell me the story. And I would listen with rapt attention, even though I knew it by heart, because that man could tell a story.

But Herschel and Central weren’t the only Baptist game in town, for the little town of Cowpens boasted two Baptist churches, both of considerable size, within a mile of one another. The other church was Cowpens First Baptist.

While I was a more frequent congregant at Central during my later childhood, my Baptist church experiences earlier in my youth occurred at Cowpens First Baptist. Because both my mama and daddy worked full-time, I was placed in the care of a warm, fun-loving lady named Barbara who, it seemed, had babysat for at least half the town’s population of children at one point or another.

My brother and I would be dropped off at her house every morning, and we would spend the day playing in her yard and busying ourselves in the carefree and borderline-dangerous way that 80s kids did.

Her husband, Billy, a “man’s man” who worked with his hands, would come home from work sometimes while we were there, and we would delight at the display of mutual admiration between him and his ancient, slobbering mutt named Fat Rat. I still fondly recall his trips with Fat Rat in his truck to get the enormous hound his favorite treat, an ice cream sandwich, which the dog would devour in a single bite. 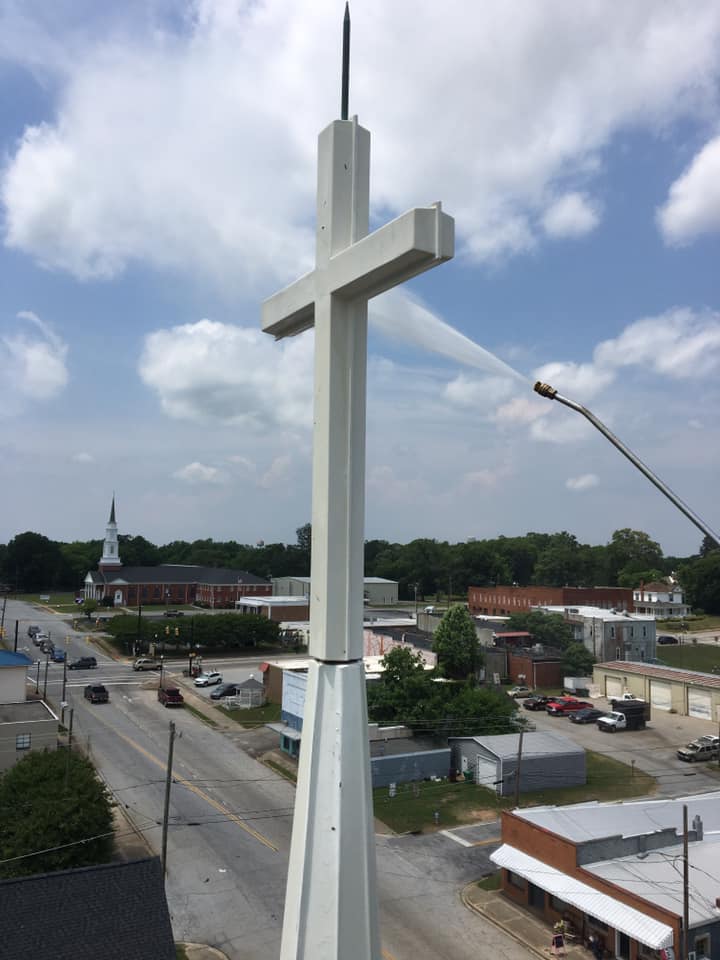 The steeple of Central Baptist with Cowpens First Baptist in background

Barbara and Billy were members at First Baptist who dedicated their time and energy to their church. What that meant for me and my brother was an invitation to attend Vacation Bible School, which Barbara helped to organize.

Now, I could embellish for the sake of the story, but the fact of the matter is, I only remember two things distinctly from that experience.

The first was falling down some risers in a music room as we were singing “He’s Got the Whole World In His Hands.” Now, while the Lord was busy holding the world, he must’ve let go of a squirmy little 7-year old just long enough for the child to lose her footing.

Now, to be fair, because I don’t want to sound like I’m accusing Jesus of shoving me during Bible School, I will confess I was likely trying out my Solid Gold dance moves, which I found worked with most musical accompaniments if I just tailored them to the piece.

The fall must have been incredibly comical to the other children as they stood there, smug in their ability to maintain some semblance of composure whilst I was transported into a spirited, albeit somewhat clumsy, religious disco fervor.

And then there was the Kool-Aid. Red Kool-Aid.

Every evening after Bible School we would have a little treat, usually some off-brand cookies or chips, but always the omnipresent plastic pitcher of cherry Kool-Aid was served alongside the food. Little did I know that my enthusiasm for the sugary beverage would garner me a new nickname that would both vex and amuse me for years to come.

A rough-and-tumble boy named Robbie (who I have to assume was a fan of the show “MASH”, which featured a character of that ignominious moniker) was the first to say it…well, shout it, really, after an overly aggressive gulp left me with a little extra enhancement in my lip area. Y’all remember Tammy Faye Bakker? Picture that style of lip artistry on a little blonde-headed girl.

As tends to happen, once the other kids got wind of the almost-salacious-at-least-by-Baptist-standards sobriquet, it immediately and completely erased any knowledge of my actual name from their little developing brains. I was to be “Hot Lips” well into my early teens.

Along with those two memories, though, I remember learning about Jesus. Through stories, through songs, through crafts, and through the Vacation Bible School volunteers of Cowpens First Baptist Church. I learned of a Jesus who would forgive things like acting out during singing rehearsal and tawdry nicknames. And I learned that the best evidence that Jesus was something special was the joy and love I saw in the faces of those good folks who wanted to share his story. Jesus and Kool-Aid went hand-in-hand for me those warm summer evenings in Cowpens, and for a few days out of the year, a little Methodist girl was an honorary Baptist.