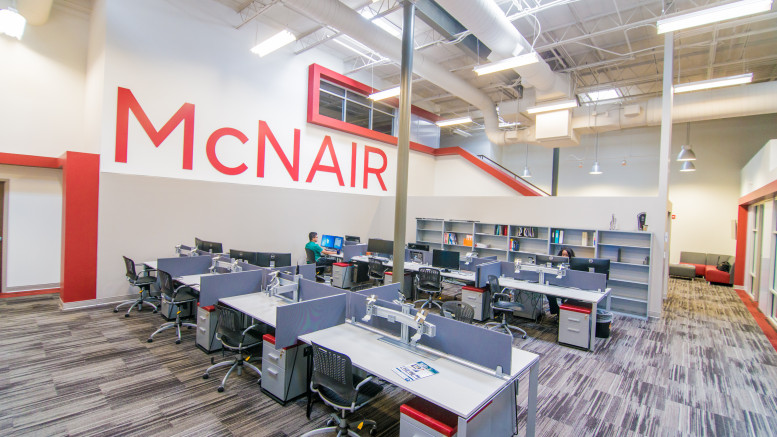 The McNAIR Center for Aerospace Research & Innovation, a state-of-the-art laboratory and education center at the University of South Carolina, is facilitating South Carolina’s critical move to the center of aerospace- related research and innovation.

Officially opening in 2015, the center received funding from businesswomen Darla Moore, Anita Zucker and Marva Smalls, forming a research alliance with Boeing, which could lead to an additional $5 million in funding and is a significant resource in the state’s aerospace ecosystem.

“This partnership with Boeing puts the University of South Carolina on the forefront of research that will lead to exciting new discoveries in the aerospace field,” said USC President Harris Pastides during the project’s announcement August 6.

“This is only the beginning of a relationship that could have a transformative impact on the economy of the state and the region,” he said. “Together with Boeing, the McNair Center will work not only to innovate, but also educate future aerospace engineers and makes South Carolina a choice destination for the aerospace industry.”

The McNair Center allows students to work side-by-side with top researchers and industry partners. By partnering with organizations to support workforce alignment initiatives and programs and camps, K-12 students throughout the state will be able explore the STEM fields as well.

At a recent summit hosted by GE Capital, national aerospace suppliers, manufacturers, and private equity professionals involved in commercial aircraft planned to add additional workers and believe merger and acquisition activity will be on the rise.

According to the FAA Fiscal Forecast, the general aviation industry began to show signs of recovery in 2012, especially with strong growth in rotorcraft and the agricultural aircraft segment of the turboprop deliveries, as well as a modest growth in the single-engine piston sector.

U.S. aircraft demand has also come back strongly, as reported by the Teal Group Analysis. U.S. airlines are now among the healthiest in the world, and a major source of jetliner demand. South Carolina’s economy is the strongest it has been in at least 20 years, eclipsing even its heady, prerecession performances, and stands on solid ground for 2016, USC economists said.

Affiliating with Boeing, the world’s largest aerospace company, will allow advanced research projects that may deliver the next generation of aerospace technology.

McNair’s research is based on industry needs and involves a wide range of areas, including: analysis and design; polymeric, metallic and ceramic composites; lightweight metals; stir friction welding and processing; advanced composite structures and certification, durability, fatigue analysis; and health monitoring and condition based maintenance of lightweight structures.

Over 30 students are currently engaged and working on research projects at The McNAIR Center. Overall, South Carolina’s aerospace industry employs more than 53,000 workers and has a $17.4 billion economic impact on the state, according to a 2014 economic development study.