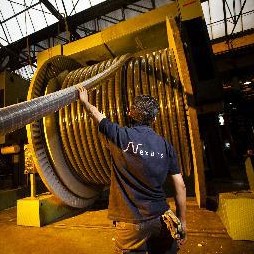 Two years after breaking ground for the construction of a new plant in South Carolina, Nexans today, officially celebrates the opening of its Goose Creek facility. The plant will produce high voltage power cables and is expected to create 200 manufacturing jobs over the next few years. The 350 000 square foot plant (32 500 m²) near Charleston will serve the growing demand for HV power systems in North America fueled by major new power transmission infrastructure projects.

South Carolina Governor, Nikki Haley, Nexans Chief Executive Officer, Arnaud Poupart-Lafarge and Steve Hall, Executive Vice President Nexans North America will inaugurate the plant today. The plant will focus on the engineering, design and installation of HV cables. The new 427 feet (130 meter) Vertical Continuous Vulcanization (VCV) tower on site, used for converting polymers into insulation layers in order to protect the cable, is now the tallest building in South Carolina. Health and safety have been priorities for Nexans during the building of this plant. There are no underground storage tanks and the substation transformers are dry to avoid potential soil contamination.

Nexans has put in place additional measures to protect employees, including the lower level of the tower that was designed to serve as a shelter in the event of a hurricane. The plant is equipped with the facilities for type testing cables up to 550 kV according to North American and international standards. The plant is ISO 9001:2008 certified. “The opening of the new Goose Creek plant represents an exciting new phase for Nexans and is an important milestone for the company as we look to capitalize on the growing demand for high voltage cables in North America. With the opening of this new plant, Nexans is best-placed to serve the major new power transmission infrastructure projects currently being planned in North America today”, said Arnaud Poupart-Lafarge, Chief Executive Officer of Nexans.

“It’s always a great day in South Carolina when the doors open to a plant that is bringing 200 jobs to our state. Nexans is a company that is not only committed to producing quality products but is also committed to making a big difference in their local community. Today we welcome Nexans to their new home in Goose Creek and look forward to seeing them continue to grow and succeed for many years to come,” said Governer Nikki Haley. Steve Hall, Executive Vice President Nexans North America commented “In the initial development phase, we were confident that the Charleston region was the perfect place to build a new plant. Now that the plant is open for business, we are more convinced than ever that it was the right move. A pro-business environment, a highly-skilled local labor force and with exceptional technical schools and training programs, mean Nexans is ideally placed to meet the growing demand for high voltage cables in North America.” The new plant in South Carolina will reinforce Nexans’ current product range in North America, adding to the existing medium voltage, low voltage, overhead transmission, industrial, building wire, electrical wire and Local Area Network (LAN) portfolios. In 2013, North America represented 14%1 of the Group’s total sales with more than 3000 people employed.