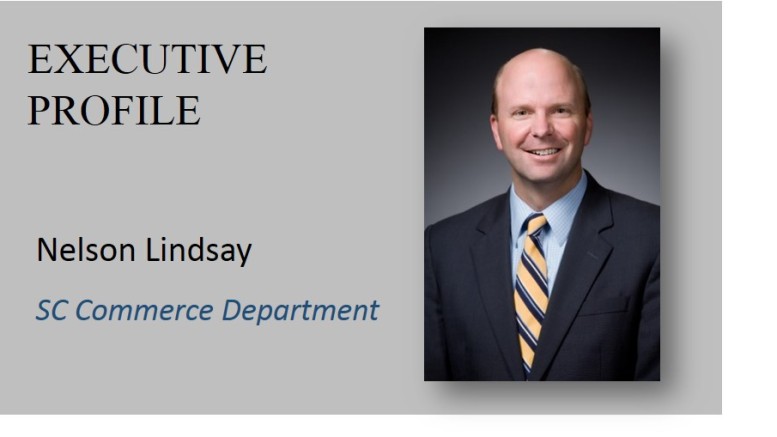 The South Carolina Department of Commerce announced last week that Nelson Lindsay has joined the agency as the Director of Global Business Development.

In his new role, Lindsay will direct project management activity and the recruitment of new industry to South Carolina. He will also work with existing industry to further assist in their growth.

At his former position, he worked to recruit new industry while helping existing businesses with expansions. Before serving Richland County, Lindsay was the director of economic development for Kershaw County for more than 14 years.

Lindsay holds a bachelor’s degree in History from Wofford College, and a Master of Public Administration degree from the University of South Carolina. He is also a graduate of the Economic Development Institute at the University of Oklahoma. He is married with three children.

The secret ingredient fueling South Carolina’s success – also the state’s great asset and source of pride – is the people. The Palmetto State’s loyal, world-class workforce has earned a reputation for making first-class products. That dedication to quality is one of the main reasons why the world’s most respected brands choose to do business in South Carolina.

South Carolina is ideally located midway between New York and Miami, giving companies the ability to serve a rapidly growing population and consumer base in the Southeast. The state is also connected to a vast logistics network of rails, roads, airports and the dynamic gateway to trade – the Port of Charleston.

Due to the state’s phenomenal success in the last four years, the state will need to continue to add buildings to its available inventory.

The Dept. of Commerce’s Existing Business Division works with SC businesses to ensure their viability and profitability. By working with local economic development offices and other agencies, Commerce visits the existing industry in SC to identify issues and explore opportunities for solutions.

South Carolina has led the nation in recruiting foreign direct investment on a per capita basis, and today is home to more than 1,200 locations of foreign companies operating within its borders. Since January of 2011, South Carolina has recruited more than $13 billion in capital investment from foreign companies, bringing more than 29,500 jobs to the state.   S.C. has offices and representatives in Germany, China, Japan, and India that lead the efforts to recruit foreign direct investment to S.C.

We have the momentum in place to continue attracting corporate headquarters and research and development facilities by building on this momentum.

Given that the Charlotte Douglass International Airport just over the state line, S.C. does have a major airport accessible to its companies and citizens.

We believe in a team approach here in South Carolina. As a part of that, we are coming off a very successful aerospace conference where in its second year saw record numbers of attendees. This allows for accessibility to suppliers and networking. We are continuing to partner with all of our allies to ensure that we take advantage of all opportunities. South Carolina is a state that had two major OEM announcements this year.

Be the first to comment on "Q&A: Nelson Lindsay, Director of Global Business Development, SC Commerce"