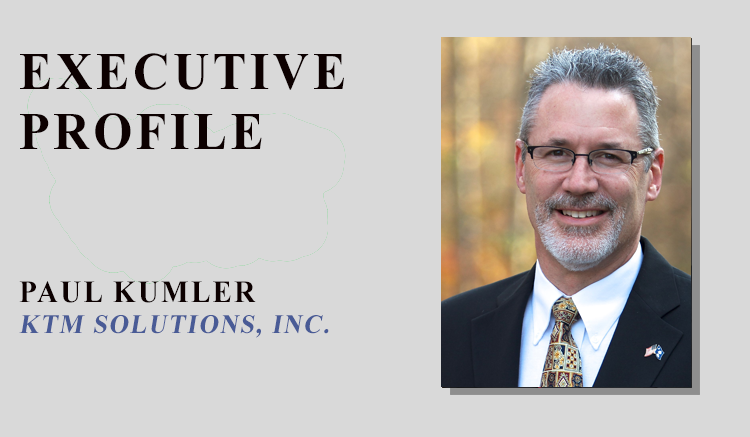 Paul V. Kumler has over 30 years engineering and senior management experience. He currently serves as president of KTM Solutions, Inc, a mechanical engineering services company he founded in April 2005.

Kumler began his career in 1983 at Cessna Aircraft Company as an environmental systems engineer. He was responsible for installation design and integration of the cooling/heating system into the Citation III business jet. This experience taught Kumler how to work in a teaming environment that included blue collar mechanics and executive management. Since Cessna was a small company, Kumler learned many different aspects of the design, test, and certification of new systems.

In 1989, Kumler accepted a position in The Boeing Commercial Airplane Company where he served as a lead design structural engineer on the nose section of the 777 aircraft.  His group held the distinction of being the only design group to release 100 percent on time and within budget. This performance earned Kumler a promotion into management and a move to Everett, Washington, where he served as Wichita Design Integration manager during the introduction of the 777 aircraft.

After the 777 introduction, he continued to manage new aircraft design projects (777-300 and the 747-600X) and became a leader of corporate level process development. Kumler finished his Boeing career as Director of Engineering for Boeing Airplane Services (BAS). BAS was a new business venture for The Boeing Company where the company entered the after-delivery commercial services market. This was where Kumler learned about business development and developed the “entrepreneurial bug.”

In 2001, Kumler was recruited by Lockheed Martin and accepted a position as Director of Engineering and Legacy Aircraft Program Manager for Lockheed Martin in Greenville, South Carolina.  In addition to overall engineering responsibility, Kumler had program management responsibility for all legacy Lockheed commercial aircraft platforms and FAA certified military platforms. Kumler is very familiar with managing aircraft design and support organizations. This experience continued to feed the entrepreneurial spirit.

By April 2005, Kumler decided to open his own business and KTM Solutions, Inc. was founded.

With more than 20 years of senior aircraft engineering management and process/organizational development experience, Kumler has seen many of the challenges companies face daily. His education includes a degree in Mechanical Engineering from Louisiana Tech University as well as graduate work at Wichita State University. He is a registered Professional Engineer in the state of South Carolina.

Kumler is involved in civic duties as well.   He currently serves on the advisory board for Greenville Technical College Engineering Graphics Technology Department.  Beginning in 2011 Kumler served a three year term as a Director on the Board of Directors of Goodwill Industries of the Upstate and Midlands Foundation.  In 2012, he was selected as Board Chair. He is also active in Rotary International where he has served twice as the community services director and once as club president.  Kumler was also selected twice “Rotarian of the Year” for contributions as club president and community services leader.  As an active member of his church, Kumler serves in several community leadership roles.

Mr. and Mrs. Kumler currently live in Simpsonville, South Carolina and are the proud parents of a son and daughter who are currently pursuing their own career paths.

I was always interested in aerospace. I still remember the excitement of watching Neil Armstrong take his first step on the moon. I built lots of model rockets when I was a kid. Like many of kids in my generation, I wanted to be an astronaut. As I aged, I knew that wasn’t a likely profession for me. Space capsules aren’t built for tall guys. I found that I had a strong interest in mechanical projects and creating new things. So, combining all of those interest I naturally found myself drawn to the aerospace industry. I began my career working in new aircraft development at Cessna Aircraft in Wichita, Kansas. Later, after joining Boeing, I moved into military weapons systems and the early development of drone type aircraft. Now, my focus is on structural systems and automating production. One cool thing, production automation is transferable to multiple industries in South Carolina and the surrounding region.

South Carolina has all the ingredients necessary to build a very strong aerospace industry. We have a great technical college system, a strong history of manufacturing, a business friendly government and a commitment to grow this sector. Please don’t miss the significance that Boeing builds and delivers airplanes in South Carolina. Until Boeing – South Carolina came on the scene, Boeing had never delivered a commercial airliner from anyplace other than Seattle. I also believe that the aerospace industry will benefit from the lessons learned in automotive production. In fact, in my experience with automotive and aerospace tooling/production automation, I predict that both industries will see benefits from have the other as a neighbor.

For me, Greenville was a personal choice. We could have chosen anyplace. KTM Solutions aerospace structural engineering services support clients nationwide. We design and analyze aircraft structural system. In fact, almost all of our aerospace business is outside of South Carolina.  In addition to structural design and analysis services, we develop manufacturing support systems (often called tools and fixtures), including automated systems. This second component of our business flows into many different industries. So, we could have chosen anyplace for our headquarters, including anywhere from Charleston South Carolina, to Wichita Kansas, to Seattle Washington. We have customers in all three locations. But the upstate offers a great place to attract talented people, a standard of living second to none, and relatively easy access through GSP to all of these locations.  We have some great non-aerospace clients in the upstate region that are equally important to our overall business.

There are many contributors to my leadership style. I learned techniques and skills through many hours of leadership and management development at Boeing. Boeing has always been willing to invest time and money in the development of leaders. Throughout my career, I have been fortunate to have great mentors and examples to follow. These were managers and directors who took time to speak into my career and provide balance and direction. Quite honestly, being a parent helped. Parenting taught me patience and supplied me with the tools to teach. My faith has a significantly impacted my leadership style.

Absolutely. I bring every experience I had at Boeing to bear in my business daily. I was fortunate to manage and work on some great programs. I learned how to manage complexity. I was trained in systems engineering principles. These principles underpin every project we undertake at KTM Solutions.

My favorite hand held device. How about a hammer, wrench, or saw. I like to work on things. I like to build. But, this isn’t what you are asking. I use an i-Phone and like it very much.

Quite a few things actually. I like to travel and visit new destinations. Hiking in the mountains. Bike riding on the swamp rabbit trail. I like doing these things with Ginger, my wife of 34 years. Visiting my children (both of which live out of state now). Hunting and fishing have always been some of my favorite pass times (although I don’t do as much as I like). As indicated by my answer to the previous question, I also enjoy working with my hands including working on cars, building bird houses, and attempting to create pottery. Last, but not least, my church is an important part of my life. As such, I volunteer for several different ministries.