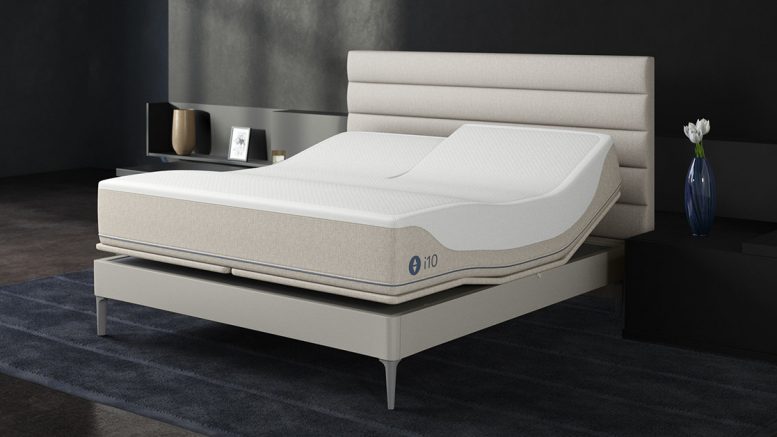 Sleep Number Corporation, manufacturer of the award-winning 360® smart bed, hosted a plant visit for the OpExChange at their Irmo site last week.  They shared that value stream mapping (VSM) has become an integral tool in their continuous improvement program.  Although there is still room for improvement, bottom-line results are already phenomenal.  The sewing department output increased approximately 75% in a one-year period.

This was accompanied by a reduction of work-in progress of nearly 40% and drastic reduction of employee overtime.  This is particularly impressive as this was accomplished with zero capital investment and occurred during a huge spike in customer demand brought-on by the pandemic.

The Irmo facility has been an active OpExChange member since 2015.  This is one of two manufacturing facility for Sleep Number, the other located in Salt Lake City.

There are 4,600 employees in the corporation with approximately 250 located at the Irmo facility.  There are 625 Sleep Number stores across the United States.

Sleep Numbers is probably the only OpExChange member that wants their people to SLEEP on the job! SLEEP is their continuous improvement methodology: 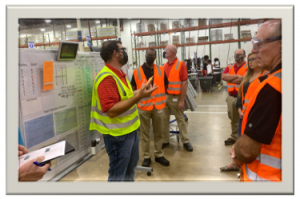 Joe acknowledged that they are still in the beginning stages of this but are making great progress.  He emphasized that this system is embraced by the entire team, most importantly the operators in the production area.

They maintain much of the visual controls and daily metrics on the floor.  “This is not a manager or an engineer, but the operators on the line that fills out this information.”

Value Stream Mapping (VSM) is a lean manufacturing tool originally created by the Toyota Motor Company.  It is a visual methodology employing standard symbols and calculations to identify both value and non-value-added time in creating a product or service.

When used correctly, it can identify opportunities for reducing and eliminating each of the eight wastes associated with production. 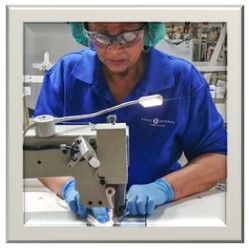 The driving reason Sleep Number chose to use this tool was to improve the lives of their employees.

With increased demand during the past year, Saturday overtime had become a regular occurrence for their team.  They also wanted to use VSM to listen to the “voice of the process.”

Three production managers from the Irmo plant, Stephen Highfill, Tim Bryant, and Ryan Kuth, joined the meeting to give their accounts of how they implemented this with their teams.  Tim admitted that he was initially skeptical but quickly became a believer in the methodology.

“The team hasn’t worked a Saturday in ten weeks.  The team is well rested.  They are motivated.  They are hitting records. They are engaged!”

The value-stream mapping exercises typically lasts for six to eight weeks with the team meeting twice per week.  Part of the underlying education of the team is education on the eight wastes of manufacturing and the book, “Learning to See” by Mike Rother and John Shook.  Tim Bryant shared that VSM and this book “helps me strategically think better and see things before they happen.”

The group divided into groups for a tour of their sewing operations.  The facility had obvious signs of their daily management system and evidence of both engagement and improvement.  Each cell had a daily management board complete with hourly goals and reasons posted for any hourly misses.  There were value stream maps in progress and a KATA board for an improvement project to move raw material closer to the point-of-use.

There was effective use of Kanban to reduce the waste of overproduction.  During the tour, one of the team members proudly shared they have gone over one year without a recordable incident.

One of the staples of an OpExChange plant visit is the discussion after the tour.  In addition to having an open question and answer period, there is also a plus/delta sessions where the visiting peers give feedback and advice.  The group met in the conference room for this candid discussion.  Joe and his team were grateful for the feedback.

During the group discussions, Joe offered to share a simple tool they developed with OpExChange members.  This is the “Waste Prioritization Tool” – a simple spreadsheet used during the data collection portion of a VSM exercise.

OpExChange members will also have access to videos and pictures taken during the event, the presentation files, as well as a blank VSM template provided by the SCMEP.

The OpExChange is a peer-to-peer network of companies in South Carolina known for generating data-driven success for members through benchmarking and best practices activities. Member companies host events and share practical examples of industrial automation, lean manufacturing improvements, and leadership development. It is an invaluable resource to South Carolina companies that provides access to others who are on similar improvement journeys. If you are interested in joining, contact Mike Demos (Mike@OpExChange.com ) or visit the OpExChange website to see current companies.