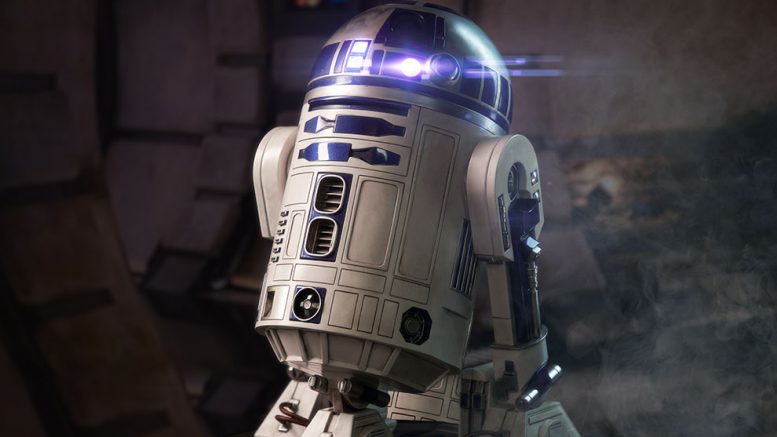 Move over R2-D2, because here comes UR5.

The Star Wars droid is make-believe, but UR5 is a real-life robot in Yue “Sophie” Wang’s lab at Clemson University. She and her team are using the UR5 robotic arm and its mobile base  to research how robots and people can better work as a team, like Luke Skywalker and his R2 unit.

The UR5 probably won’t be blasting off in an X-wing fighter anytime soon, but the robot does hold the promise of taking over repetitive tasks in manufacturing. Humans would then be free to focus on the more satisfying work that requires higher-level thinking, skill and dexterity.

But if more menial labor is going to be offloaded to machines, robots are going to have to show they can be trusted to do their jobs safely and effectively.

And that’s the central challenge for Wang and her team. 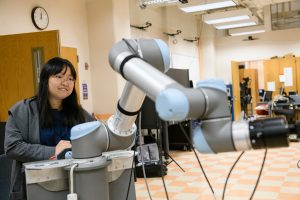 They designed the UR5 and its mobile base– together called a mobile manipulator– to observe and mirror human actions and to understand human intent. Wang and her team also try to better understand how humans think and make decisions when working with robots.

They collect data and then use machine-learning techniques to build models reflecting how much humans trust their robotic co-workers.

“Understanding that, we can program our robots so that they behave and act in a way that they can better work with humans,” said Wang, the Warren H. Owen- Duke Energy Associate Professor of Engineering.

Wang’s lab is tech-lovers paradise, packed with various robots, drones and a driving simulator. Students can often be found tapping away at keyboards, their screens filled with code.

Yu “Gloria” Zhang, a master’s student in mechanical engineering, demonstrated the team’s work by standing in front of the UR5 while it held a small jar in its claw-like gripper. Once she raised her arm, the robot moved closer to her. Anytime she waved her arm left or right, the robotic arm mirrored her movements.

Wang said that advances in technology could eliminate some jobs, such as those requiring heavy lifting or repetitive tasks. But she also sees a definite need for workers who will understand artificial intelligence and robotics.

“If we want to employ a manufacturing solution on the manufacturing floor, there must be an engineer who can troubleshoot the robot,” she said. “Otherwise, it will not work. Although robots are intelligent, they are not so smart that they can do everything.”

Students who work in Wang’s lab are not only advancing the research. They are also preparing themselves for a future that brings humans and robots closer together.

“It’s supervisory control,” he said. “When we have a human that is controlling multiple mobile robots like drones or UAVs, we want to know how humans trust individual robots. I’m using machine-learning and deep-learning methods to model trust in multiple agents in a computational way.”

Fooladi’s dream is to work for NASA, which means the robotic technology he is developing at Clemson could one day be headed to the stars.

Be the first to comment on "Clemson Connection; Trusting robots empowered by artificial intelligence"