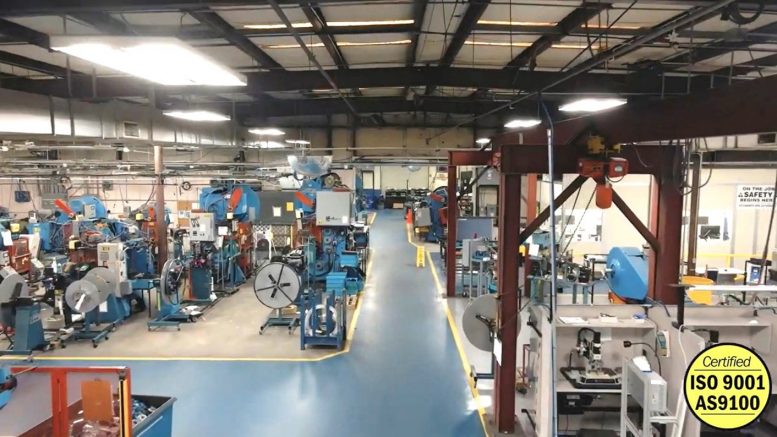 Phoenix Specialty Manufacturing is a job shop located in Bamberg County, South Carolina. Although located in a rural setting, they have a tremendous success story with a bright future. They are a fourth-generation, family-owned business with an extremely loyal workforce and low turnover. In their state-of-the-art facility, they produce high precision stampings for quality critical products across the nation. Phoenix has continued to grow and revitalize their business for decades.

In August of 2021, Phoenix joined the OpExChange community and became a regular participant in benchmarking events. Last week, they hosted a plant visit at their recently expanded facility to share some of the key elements of their success.

Steve Cornforth is the Sales Manager for Phoenix Specialty and presided over the three and a half hour visit. Steve started with Phoenix in 2012 as their machine shop manager and has managed their entire operations as well. He was promoted to the Sales Manager role in 2019.

This OpExChange visit began with a catered lunch for the visitors along with their entire workforce. Steve opened with, “We are one of the best stampers around – in-house tool & die shop, raw material inventory, managed finished goods inventory, and the way we do our processes.” He added that although there are several specific, strategic reasons for their success, all the credit ultimately goes to their amazing workforce. 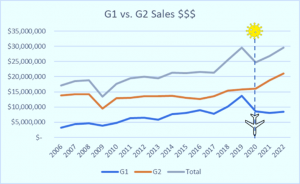 Steve explained that over the last two decades, the aerospace industry has been the largest industry segment of their business, growing steadily, year-on-year. It increased particularly quickly from 2016 to 2019. At the end of 2019, it accounted for 55% of their total revenue.

It was at this point that the Phoenix team began a campaign to focus on the non-aviation market – just in case something were to happen to upset the aerospace segment. Their campaign included reaching out and “touching” the customer – not just with emails, but with phone calls and visits.

They did not have a crystal ball, Steve added, but the timing of their campaign was fortuitous. When the pandemic hit in 2020, it resulted in a 60% drop in aviation sales and a 20% fall of overall sales.

This was an impact during 2020, but “our plan to start growing our non-aviation customers in 2019 helped us when 2020 hit.” Phoenix continued to focus on their campaign and the non-aviation portion “took off” and it is still growing. A key point to note is that the Phoenix leadership did not have any layoffs during the lull in business. 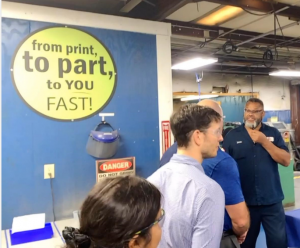 A distinct competitive advantage that Phoenix Specialty holds over most job shops is their in-house tool and die shop. They have access to one of the largest inventories of interchangeable dies in the industry. This enables them to quote and produce parts quickly.

“We don’t wait on anybody for dies,” Steve added. This also gives them control over the quality of the dies with the Phoenix proprietary die set. Their engineering group designs the dies and programs the equipment. Their machine shop builds the dies, and the assembly group creates the die sets.

All this translates to faster lead times and reduced cost to their customers. Phoenix can create a custom die in three to four days. A simple die can be created in a matter of a few hours.

Secondary Operations
“Have it your way” was a slogan Burger King coined, but it definitely fits the modus operandi of Phoenix Specialty. Steve said, “You can order anything from Phoenix you want. If it’s flat, we’ll bend it. If it’s bent, we’ll flatten it for you. We’ll paint it, counter-bore it, counter sink it, tap it, whatever you want.”   He emphasized that they will do just about anything to add value for the customer. There are more than thirty secondary operations to make the parts “Special” for their customers.

Investment in Inventory
With the current state of the supply chain, Phoenix’s inventory management programs provide a huge competitive advantage for them. With regards to finished goods, they will produce and stock finished goods for a customer for up to three years, releasing product when it is needed. The customer does not pay for the product until they receive it.

On the supply side, Phoenix has invested millions of dollars into their raw material inventory. They claim to have the largest and most extensive raw materials inventory in the industry, with more than three hundred distinct types of materials, including some exotic alloys. Most metal stampers will order material when they receive an order, adding to the overall lead time and cost.

Processes & Quality
The 120,000 square foot facility is truly state-of-the-art. Phoenix Specialty is expert in precision stampings and have invested in the equipment and technology to produce quality parts. There are forty-eight OBI presses, ranging from 25 to 160 tons. 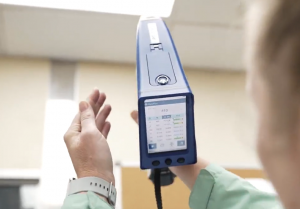 They continue to invest in CNC equipment including lathes, milling machines, Swiss screw machines, wire-EDM, and water jet. All produced parts are fully traceable. Phoenix was one of the first companies in the United States to achieve AS9100 certification, meeting the rigorous quality requirements of the aerospace and defense industries.

SCMEP
Steve commented that the South Carolina Manufacturing Extension Partnership (SCMEP) has always been their “go-to” resource for guidance and operational support. They have trained, consulted, and helped Phoenix remain competitive in numerous ways – from strategic planning and executive coaching to inventory management and competitor analysis.

Steve remembers when he first joined Phoenix in 2012 being trained in the value stream mapping technique from the SCMEP. “There are so many things that the SCMEP has done to help us, and we are very grateful for it.”

Information Technology
John Bozard, IT Manager for Phoenix, talked with the group briefly on IT customization and cybersecurity. He pointed out that while they are a low volume job shop, everything else is high volume – quotes, customer orders, part numbers, characteristics – there is a tremendous amount of data and activity that takes place in the company. Located throughout the facility are status monitors collecting and displaying real-time performance KPIs. One project underway this year is productivity monitoring, which displays real-time earned hours versus clocked hours. John utilizes Microsoft Access and Power BI for many of his applications and is experimenting with Microsoft Power Apps. John has worked for Phoenix for 38 years, beginning as a tool room machinist.

Leadership and Culture
There are very few family-owned businesses that make it to the third or fourth generations. It is inspiring to South Carolina manufacturers, both large and small, to see a business in Bamberg County performing so well on a national level. The strategies and programs they put in place have been effective and continue to pay dividends. The two things that resonated so deeply with the visiting OpExChange companies were the leadership and culture.

The culture of employee engagement and pride radiated at every point of the plant visit. Employees spoke freely and candidly about their work. They were proud of the results that they achieved as a team. Each tour stop was presented by one of their tenured employees who not only exhibited vast knowledge in their work but also an intense pride in the product being produced. The delineation between management and the workforce was virtually nonexistent but the concept of teamwork was pronounced.

A deep culture like this is not developed overnight but is the result of sustained leadership that cares about their employees and their customers. We look forward to seeing what Phoenix Specialty Manufacturing accomplishes in their second century of operations!

About Phoenix Specialty Manufacturing
Since 1907, Phoenix Specialty has made sourcing specialty components easy for customers in every industry imaginable. They are the leading supplier of custom parts to America’s Original Equipment Manufacturers and the only company offering a written Risk-Free Guarantee. They specialize in “custom,” and have the ability to manufacture parts – in low to medium volumes – with tolerances down to .0005” thick.

About OpExChange
The OpExChange, sponsored by the South Carolina Manufacturing Extension Partnership, is a peer-to-peer network of manufacturers and distributors in South Carolina known for generating success for members through benchmarking and best practices activities. Member companies host events and share practical examples of industrial automation, lean manufacturing improvements, and leadership development. It is an invaluable resource to South Carolina companies that provides access to others who are on similar improvement journeys. If you are interested in joining, contact Mike Demos (Mike@OpExChange.com) or visit the OpExChange.