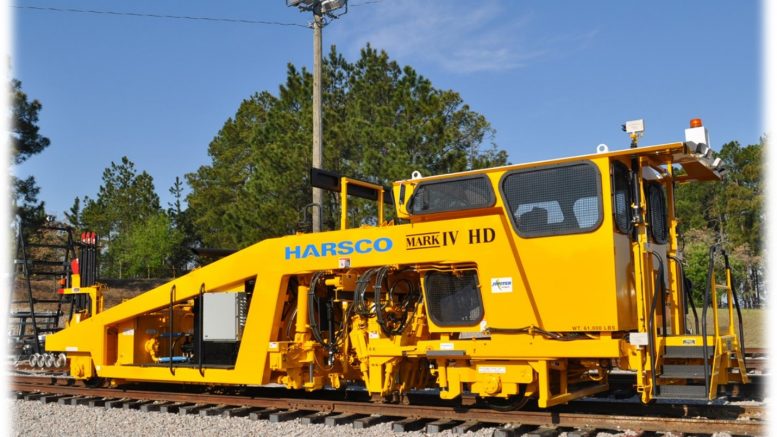 Harsco Rail established operations in West Columbia, South Carolina in 1966. Approximately six hundred employees at this site produce and service railway track and maintenance equipment. Harsco has been an active member of the OpExChange for nearly fourteen years. Although they had continuous improvement activity in the past, it was not incorporated into their strategic focus. That changed dramatically two years ago.

In an OpExChange plant visit in September 2022, Harsco Rail demonstrated how they are going through a new transformation, intent on infusing the fundamentals of lean manufacturing deeply into their existing culture.

Doug Combs, Vice President of North America for Harsco Rail, opened the meeting and welcomed the thirty peer OpExChange visitors to their site. He emphasized that this is the genesis of a new era. Doug is adamant about providing the training, support, and resources necessary to sustain lean manufacturing as an integral part of the Harsco Rail culture.

The Harsco Rail operational excellence model uses traditional Hoshin planning and policy deployment. Although the program is centered on the lean principles of Plan, Do, Check, Act (PDCA), the implementation and deployment of their “Mission Control” is unique. It essentially incorporates an enterprise level “A3” problem solving application.

In the twenty-one months since this renewed journey began, the team made tremendous progress. In 2022, they targeted more than $1million in improvements. They are on track to achieve more than double that of the target. The primary lean tool they are using in this transformation is the A3 problem solving methodology. 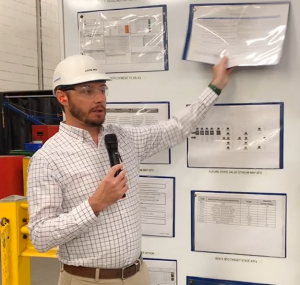 The first stop on the plant tour was the “Mission Control” area, prominently situated on the production floor. Justin Frye, Director of Manufacturing, leads the weekly mission control session here.

The left side of the large display board is modeled after an A3 format, including standard work documentation for conducting the meeting.

Justin stated that he makes a point of referencing the standard work sheet as he conducts the meeting. This helps support the concept that everyone follows standard work, including the Director.

The center portion of the board includes columns for each month of the year and is divided into three horizontal sections for each of the three types of continuous improvement activities: Just Do It (JDI), Rapid Improvement Event (RIE), and longer-term projects.

A rapid improvement event is a continuous improvement activity originated during the initial value stream analysis. It is comprised of a cross functional team including subject matter experts, customers or suppliers, and “fresh eyes” from employees not directly associated with the process.

The event itself last five days but preparation begins four weeks prior to the event and monitoring continues for four works after the event. There is a thirty, sixty, and ninety day follow up to validate sustainability of the improvements. The team utilizes an A3 to conduct and report on the RIE.

A project follows the same format of an RIE but can last months and are typically for a more complex undertaking. A JDI is typically much smaller in scale and can be completed by one or two people in a few days.

The bottom of the board includes a bowling chart displaying monthly progress of the key metrics of the facility. A3 documentation for each RIE and project is included on the right side of the board along with a rolling action item list.

Justin added that they do not review every project or RIE in the weekly session. They focus on those that are “red” or are being recognized for their success. 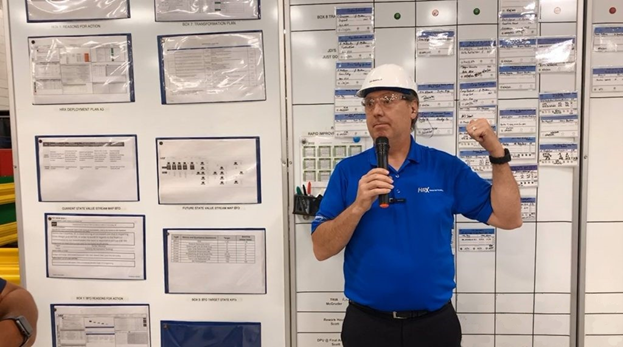 Ed Bearden on Mission Control – “It works, plain and simple.”

Surfacing Equipment
The “bread and butter” product line for the site is Surfacing Equipment. The units produced on this line are huge – each is approximately forty-four feet long, ten feet wide, and weighs 75,000 pounds. There are three sequential assembly stations for the production units. Overhead cranes are used to transport the massive units from one station to the next.

Ed shared that the team made significant improvement on this line already. A key focus was workplace organization, material identification and staging. The efficiency of this line is now much improved . Lead time plummeted from 21 days to 14 days. As a result of this, they were able to redeploy headcount while reducing associated overtime.

Project Success in Hose Assembly
Chris Jones is the day-shift production operator in the hose assembly area. He shared with the OpExChange visitors how this area has improved as a result of an A3 project.

Chris explained that there are numerous hoses used in the Harsco Rail product line. The hose assembly area includes dies, crimpers, and associated equipment to produce those hoses.

Ed worked on a multi-month project to identify and make improvements. The result was a reorganized area with a comprehensive, yet simple hose assembly process utilizing a LabVIEW application. Poka-yoke checks were implemented that ensure a quality product. 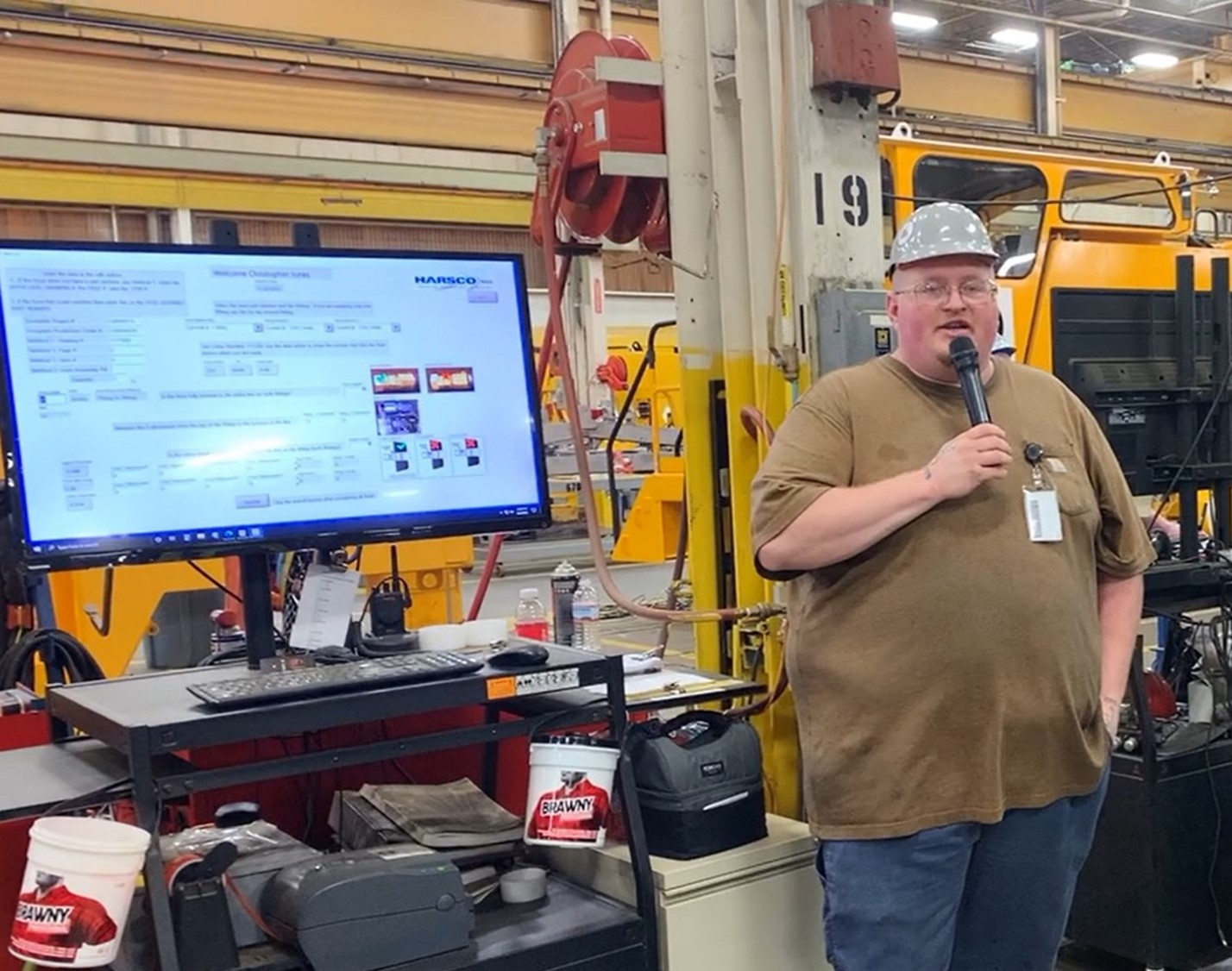 Electrical Assembly – RIE success story
Probably the most remarkable success shared during the tour was in the Electrical Assembly department. Justin walked the group through their management for daily improvement (MDI) board and discussed the dramatic improvements made. First pass yield sky-rocketed from about 48% to nearly 100%. This was accomplished by the RIE team through their implementation of a dedicated training lab and training schedule.

The A3 Methodology – Infusing Lean into the Culture
Ed conducts a two-hour A3 training on the first Friday of every month. By training everyone with the understanding of the process and the A3 “language” they are building an army of problem solvers.

Ed added that Harsco Rail is not just using the A3 as a problem-solving tool. They are also using this as a means for infusing the lean thinking into their culture. In his monthly training, he also includes shared values and the meaning and importance of “consensus.” The students leave understanding that consensus does not mean that everyone agrees, but it does mean that everyone is pulling in the same direction.

Not Flashy, but “It Works”
In his opening remarks, Ed prefaced the event by stating that the OpExChange visitors would not see anything glitzy on the tour. “The process is very manual. It is not flashy. There is not a big scoreboard with flashing lights. This is grassroots, nuts and bolts, how you do it.”

The results speak volumes for the success of the effort. Achieving more than its targeted savings without investing capital achieves the lean principle of “Creativity before Capital.”  Most OpExChange companies would welcome this kind of success. Furthermore, these successes are increasing the workforce morale and supporting the sustainability of the lean culture infusion.

About Harsco
Harsco Rail’s origins started in 1909 with the foundation of Fairmont Railway Motors. Throughout the years, the company has grown with the times, adjusting products and services to meet industry demands. Today, Harsco Rail is positioned to develop and deliver new ideas for maintaining track structures around the world. They turn broad market insight into focused solutions. Harsco Rail is a worldwide operating segment of Harsco Corporation, a global market leader providing environmental solutions for industrial and specialty waste streams, and innovative technologies for the rail sector.

About OpExChange
The OpExChange, sponsored by the South Carolina Manufacturing Extension Partnership, is a peer-to-peer network of manufacturers and distributors in South Carolina known for generating success for members through benchmarking and best practices activities. Member companies host events and share practical examples of industrial automation, lean manufacturing improvements, and leadership development. It is an invaluable resource to South Carolina companies that provides access to others who are on similar improvement journeys. If you are interested in joining, contact Mike Demos (Mike@OpExChange.com) or visit the OpExChange website www.OpExChange.com.