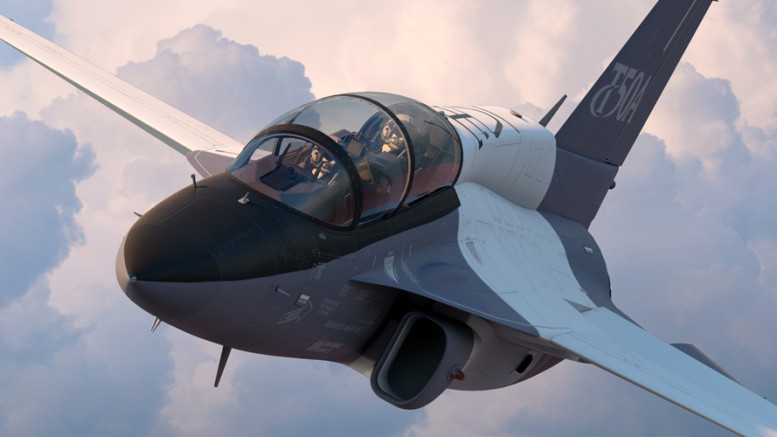 A competition to build pilot training systems in the Upstate could lead to more than just the jobs, some area officials are saying.

In February, Lockheed Martin announced it would partner with Korean Aerospace Industries to enter into the U. S. Air Force’s Advance Pilot Training competition with their T-50A aircraft and ground-based simulator training system.

The Final Assembly and Checkout site for the training system would be located in Lockheed’s Greenville plant at the South Carolina Technology and Aviation Center (SCTAC), the company said.

“If we get the contract, we could see an addition of more than 200 jobs,” she said.  “The jobs would run the gamut from managerial to mechanical.”

Farmer said the workforce to fill those jobs would come from the Upstate community. Working with Greenville Technical College, the company said it was confident it would be able to find the skilled employees it needs.

Kevin Landmesser, Sr. Vice President of the Greenville Area Development Corporation, said winning the contract could have a much larger impact on the Greenville area.

“With manufacturing, when you get a contract like this, there is a multiplying effect,” he said. “We would expect for every one job the Lockheed contract would create, there could be an additional one and a half to three service jobs created.”

Landmesser said the number of jobs could increase further still.

If Lockheed were to win the U. S. Air Force contract, the program would be more attractive to other air forces around the world, he said.

However, William Hartung, director of the Arms and Security Project at the Center for International Policy, feels those estimates may be a little exaggerated.

“Lockheed has been known to exaggerate the number of jobs a project would create, but I think in this case, it’s probably not an exaggeration,” he said. “Two hundred jobs for a project like this is more or less on target, but I think the trickle down job numbers are exaggerated.

Farmer said winning the bid would have a major impact on the aerospace industry in South Carolina.

“We already have a growing aerospace industry in this state, and between Boeing on the coast producing fifth generation airplanes, and Shaw Air Force Base with its fifth generation pilots, we’ll be able to provide the Air Force with fifth generation training,” she said.  “There could be huge advantages and impacts for the state with the combined military and aerospace manufacturing presence.”

Be the first to comment on "Depending on who you ask; Lockheed contract could have significant trickle-down effect"