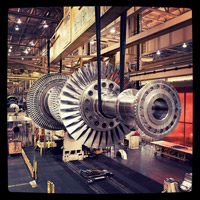 General Electric(GE) could put up to 500 U.S.-based jobs overseas the company said today. The company cited the lack of export financing since the U.S. Export Import Bank (Ex-Im) lapsed in July 2015  as a key reason for the potential move. GE operates a gas turbine plant on Garlington Road and a jet engine facility in Greenville County. The announcement would impact GE jobs in Greenville.

GE is currently bidding on $11 billion of projects that require export financing. GE has reached an agreement with the French export credit agency

. (COFACE) to provide a line of credit for global power projects. This line of credit will initially support potential orders in a number of international markets including Indonesia.  Also, to access the required export credit for its customers of its aeroderivatives turbines, GE will move its final assembly from the U.S. to Hungary and China.  As related projects are bid and won in these two product lines, GE will move approximately 500 jobs from Texas, South Carolina, Maine and New York to France, Hungary and China.

“This is bad news and I fear even worse news is still to come,” said U.S. Senator Lindsay Graham. “The sooner Congress reauthorizes the Export-Import Bank and puts us back on a level playing field, the better it will be for workers in Greenville and across our state.”

The U.S. remains the only major economy in the world without an Export Bank. Since the Ex-IM authorization expired July 1, GE has commenced talks with several foreign export credit agencies (ECAs) to secure financing for its customers.

GE customers often require guaranteed financing from an ECA in order to submit a bid. With no U.S. export financing available, GE must pursue non-U.S. options. Many of these ECAs have requirements similar to the U.S. Ex-Im Bank’s that production and jobs must be invested in-country to qualify for financing. This will result in the loss of thousands of U.S. jobs – both at GE and at our suppliers.

“We call on Congress to promptly reauthorize Ex-Im,” said John Rice. “The truth is that Ex-Im supports thousands of U.S. jobs and has returned $7 billion to the U.S. Treasury over the last 20 years – a rare government program that supports the economy while cutting the deficit. In a competitive world, we are left with no choice but to invest in non-U.S. manufacturing and move production to countries that support high-tech exporters.”

In addition, we have determined that we must move packaging for our 50 hertz aeroderivative gas turbine product line from the U.S. to Hungary and China, where functioning ECAs will support our customers with critical financing.  The move is expected to impact 100 people who currently work in the company’s facility outside Houston, Texas, and transition will take place in 2016.

“The United States should not unilaterally disarm, yet that is exactly what we are doing,’ Graham added. “This is a recipe for losing jobs.”

In the past three years, 80 percent of these products have been sold to countries where ECAs are required.   By moving this work to Hungary and China, where we already have packaging capabilities, we can be assured of export financing for our customers.

“Our customers rely on export credit agencies, like U.S. Ex-Im, to finance their critical power projects,” said Jeff Connelly, Vice President, Supply Chain, GE Power & Water.  “While our preference is to continue producing power generation equipment in our best U.S. factories, without customer access to the U.S. Ex-Im bank, we have no choice but to move our work to places that will offer export credit financing of these projects.”

“We do not make today’s announcements lightly, and in fact, have done everything in our power to avoid making these moves at all, but Congress left us no choice when it failed to reauthorize the Ex-Im Bank this summer.  We know this will have an impact not only on our employees but on the hundreds of U.S. suppliers we work with that cannot move their facilities, but we cannot walk away from our customers.” said John Rice, Vice-Chairman, GE. “

Be the first to comment on "GE to Put U.S. Jobs in France"