Last week, you were introduced to Nellie Chapman McDonald – wife, mother, grandmother, and  force of nature. This week we look back at a young Nellie, lovely and ambitious, and determined to rise above her station. We begin with her time working at Fork Shoals Mill…

I have a letter written by Nellie dated March 2 1943, to her mother, who was living at Route 3 in Pelzer. The transcript is as follows (bracketed notes are my own):

Why don’t you write sometimes? [Her sweet nature reveals itself right away] I trust you all are getting along o.k. As for myself I am just a little tired after working all night.

Guess what I did last night? None other than sweep at the mill! Just as I got my sides cleaned up here comes Ted and Major wanting me to sweep so as to let Tommie start learning to doff. Ted said that he wanted me to learn to do everything in the spinning room so that he could make a section hand out of me and Doris later. Boy was I proud when he selected Doris and myself. [Note: this is all sarcasm, as she hated every aspect of her brief time at the mill and she was not one to suffer in silence] I am going to learn to blow out the motors tonight, you can just imagine how excited I am, I can hardly wait to go back to work.

By the way, I will be home Sat. and Nancy is coming with me so have the front room cleaned up [Ma was more about giving directives than asking nicely] Here is a letter I received from Woodrow [her half-brother] several days ago, also a picture of his girlfriend. I think she is real cute, don’t you? Save them for me. Also a letter from Vera [her half-sister.] I’ll see you all Saturday if nothing happens.

P.S. We will be down on the 11 o’clock train and will get in Honea Path about fifteen until twelve. I’ll buy some groceries in town so don’t bother.”

In reading this letter, it is critical to understand the spirit in which it was written. Nellie was not, in fact, enthralled with her new sweeping and doffing duties, any more than she was actually enchanted by the glorious prospect of advancing her position in the mill. She was annoyed, indignant, and not about to let an opportunity pass to let her mama know just that. 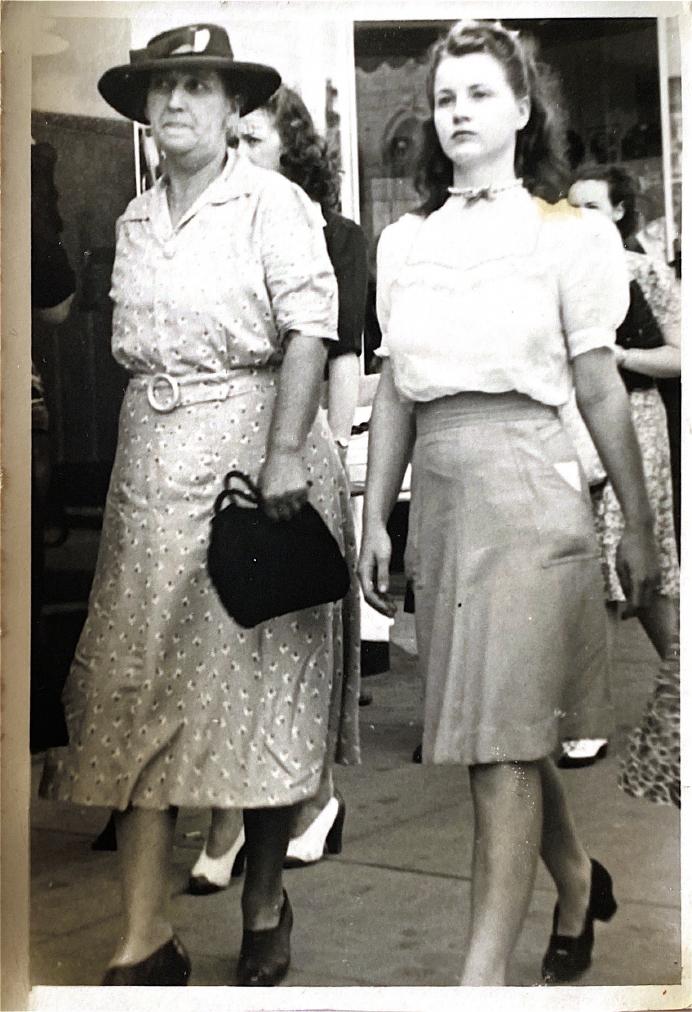 Young Nellie on a school trip circa. 1940

One senses she blamed her mother for sending a lovely, delicate flower like herself into a hot, dusty, utterly charmless mill where her only prospects were cotton lung and long hours of physical labor.

It’s worth noting that part of her righteous indignation may have stemmed from the fact that her family’s farm was, after all, a cotton farm, and she was more accustomed to viewing the plant from a shady porch than sullying her soft hands with it in such an inelegant way.

As for the mill itself, a recent article describes Fork Shoals Mill in rather romantic terms as “a classic Piedmont mill village”, a somewhat amusing modern take on mill life. The recent revival of decaying mills as hot spots for gentrified living has been something I’ve watched with mixed emotions and the occasional raised eyebrow.

While I am a tireless advocate for historic preservation, I also know darn well my mill-worker ancestors are rolling in their graves at the prospect of some poor schmuck shelling out thousands of dollars per month for a trendy loft where they themselves spent countless grueling hours in the Spinning or Weaving rooms, their childhoods carried away like the finest particles of cotton dust which were dominated the stagnant air of the mill.

Those “halcyon days” of the textile era in the South were not quite so halcyon as ambitious Realtors might have you believe when they are waxing poetic about the high ceilings and exposed brickwork in the pricey new apartments.

But Fork Shoals Mill, which began production in 1870 and shut down in 1978, was a product of its time, and there was certainly a pleasant simplicity to life there, and at the numerous other mills dotting the Upstate SC landscape at the time. The mill was not just a workplace, not just a means to an end. It was a lifestyle. A lifestyle that included mill villages whose tiny, cookie-cutter homes left little space between a mill hand and his neighbor. 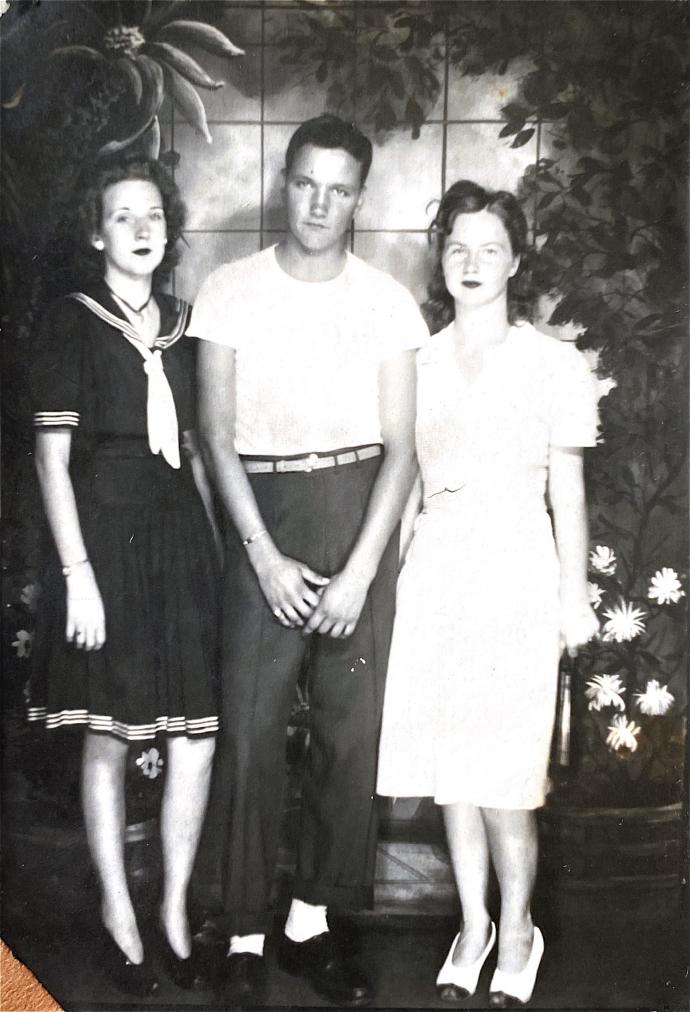 This involuntary proximity seems to have, for the most part, engendered a spirit of community and a sense of the obligation to care for one’s neighbor. The mill baseball teams, for example, are the stuff of legend, and most Upstate natives are familiar with the name “Shoeless Joe” Jackson, famed celebrity mill player who worked for Brandon and Victor Mills, and who would go on to achieve fame in both the minor and major leagues.

Countless photographs still exist showing mill community gatherings, picnics, religious and secular events, all of which convey a certain homespun esprit de corps. Even the money earned at the mill stayed “in house”.

Employees were often paid in proprietary mill tokens, which were then spent at the mill store, refilling the coffers from which the money had been taken in the first place. Mill life was a life of struggle and hardships, to be sure, but it also offered security, community, and camaraderie.

And my Grandma wanted no part of it.

Mill life would never afford her the creature comforts and elegant lifestyle she so clearly craved. As the youngest daughter of a total of eight siblings, and half-siblings, she was doted on and coddled by her brothers and older sister, and was particularly close to her full-brother, Campbell “Norman” Chapman.

The letters that exist between them are both heartwarming and heartbreaking to read, as they change in tone, tenor, and frequency from his early days in the Army (when he casually notes on numerous occasions that he does not foresee being sent overseas into the action of World War II) to just before his tragic death at age 22 on January 23, 1944 in heated battle at Anzio Beachhead, Italy.

It was the day before his only child, and namesake, reached his first birthday.

A small, tattered newspaper clipping in a scrapbook mentions that Nellie’s parents actually saw all but two of their nine children volunteer to serve in various branches of the military during the Second World War, including older daughter, Vera, who served with the Medical Air Corps in North Africa.

Her oldest brother, Will Horace, was something of a local celebrity, owing to his Air Force accomplishments, including flying Eleanor Roosevelt on his plane, “Snafu” when she traveled to New Guinea. But Nellie and Norman had a special bond; only two years apart, they were the next-to youngest, and were inseparable from their early years. 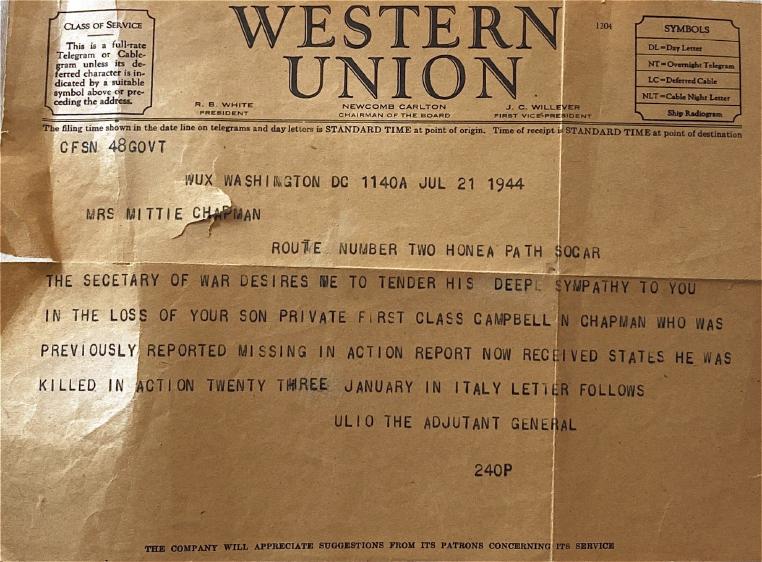 What sort of panicked disbelief must Nellie and her family have experienced when those dreaded Western Union delivery men darkened the door of their Centerville home, delivering first the news that their son and brother was missing, then confirming his hero’s death?

And what span of time could pass more slowly and with more incomparable agony than the time between the two?

The tragedy would come not quite a year after Nellie began her work at the mill.

No record remains of how the family dealt with this unimaginable tragedy, but the impact on Nellie and her family must have been immeasurable.

But, generally speaking, Nellie’s childhood had been a good one. Her father was a prosperous businessman, and her mother was a lovely woman with red hair and blue eyes who was a kind soul, selfless enough to have named her only daughter after her husband’s first wife, who had died tragically at age 33.

(She would also find herself caretaker to her grandson, after her step-daughter, Vera, suffering from severe “shell shock” as was then the term for PTSD, suffered a severe mental breakdown after giving birth to a baby boy and was committed to a psychiatric hospital for a number of years.)

During her youth, Nellie would have witnessed countless friends and relations go off to work at the textile mills, and seen them tethered to that thankless vocation until death brought their only respite. And while that may have been a fine life for others, it was no life for Nellie Chapman. She needed a plan to ensure that her brief stint at the Fork Shoals Mill was just that…brief. And her plan had a name…six names, actually: Albert, Cecil, Forrest, William, Mac, and Gordon.

Tune in Next Week for Part 3

Be the first to comment on "Her Name Was Nellie, (Part 2)"