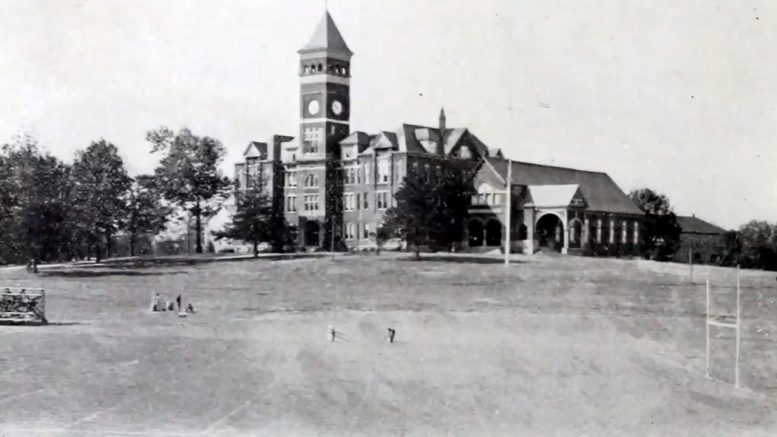 Nellie, it would seem, collected beaux the way some women of her day collected thimbles. The letters, handwritten and all still in their original envelopes, date from 1941-43, right up to just a month before she married my grandfather while he was on leave from the Marines, with whom he had enlisted at age 18. 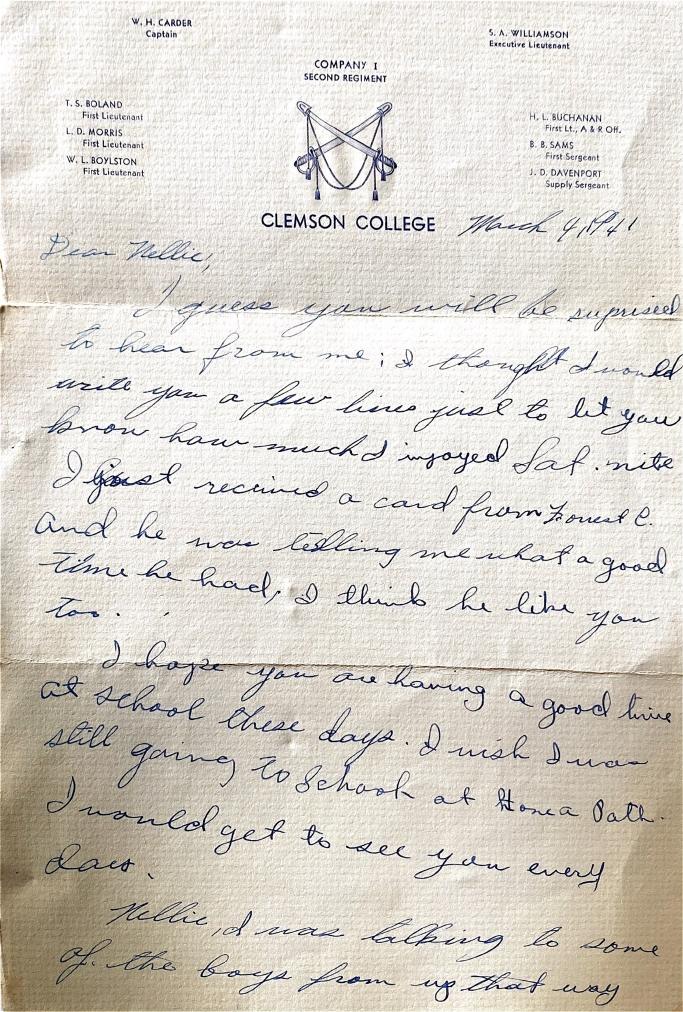 It seems she was hedging her bets, and some might find a certain cynicism to the whole thing, but Nellie was simply being pragmatic.

For a young woman with only a high school education, in rural Upstate SC, there were fairly few avenues through which one could transform one’s destiny.

And for Nellie, she knew she could capitalize on her looks and charm, and had not an ounce of compunction about doing so.

Her well thought out plan involving the young men in question even included something of an “insurance policy”, as evidenced by her lifelong possession of all the correspondence.

The fact that the she held on to the letters until her death shows either a certain ennui for days past, or, more likely, a back-up plan to track some of the fellas down if my grandpa failed to live up to her high expectations.

Knowing Ma the way I did, I can envision, with utter confidence, her occasionally pulling out the dusty letters when my grandfather had committed some marital sin, and casually fanning herself with the stack of them, as a pointed reminder that, even then, she had “options.” Some of those options were “The Clemson Boys.” 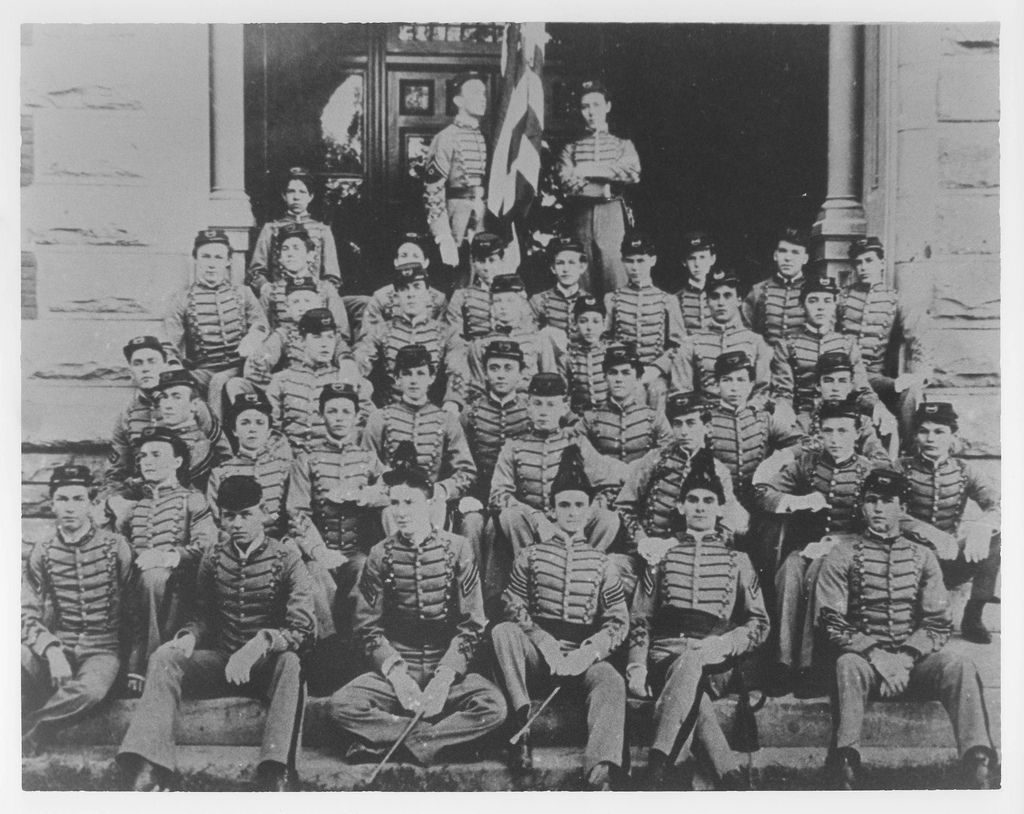 The time-worn, tattered envelopes and stationery emblazoned with the “Clemson College” logo (the school was, at that time, a military college,) were sent by several different young men, all of whom were friends with one another, all of whom were smitten with lovely Nellie, and none of whom realized she had each and every one of them in her snare.

The letters reveal the attempts the boys made in their efforts to pursue her without their friends being aware of the pursuit.

Case in point: two letters with the same date of March 19 from Forrest Chapman and Albert Branyon. Albert’s letter reads, in part: “Chapman [Forrest] is coming home with me Saturday, and is planning on dating Kathleen and if you don’t have a date I would like very much to have a date with you.” 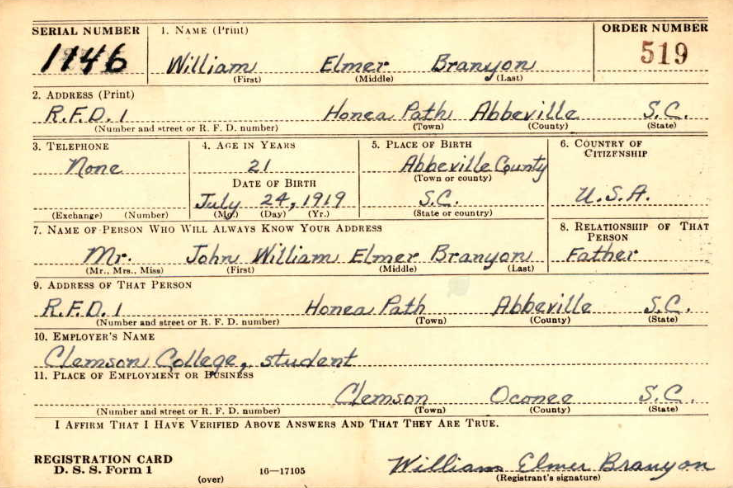 It becomes clear, however, that whoever this Kathleen was, she was playing second fiddle to Nellie because Forrest’s letter makes no mention of her, instead reading “Nellie, Albert wants me to stay with him Saturday night and go on home on Sunday. If I do decide to stay with him, could I see you that night?”

As the saying goes, I would give my eye teeth to know how my clever grandma handled this particularly precarious situation, but I imagine she somehow pulled it off, disappointing poor Kathleen in the process.

Another letter is from a William Branyon, who just happened to be Albert’s older brother, and he, too, is a Clemson classmate of the others.  This letter is dated March 4, and indicates that he and Forrest had visited with Nellie the previous Saturday night. Clearly another victim of Nellie’s charms, he writes about the visit as follows:

“I thought I would write you a few lines just to let you know how much I enjoyed Saturday nite. I just received a card from Forrest C. and he was telling me what a good time he had. I think he likes you too.”

It seems they all did. What was the magic that my grandmother possessed that allowed no man to slip through her fingers? Whatever it was, it was both a wonderful and fearful thing for those caught up in it, as they all seemed well aware of its affect on their peers. William’s letter goes on to say:

“Nellie, I was talking to some of the boys from up that way Sunday evening and they all said they wanted to meet you. Well, don’t let any of them get to liking you too much or the other way around for I want to come to see you some more, that is if you are interested.” 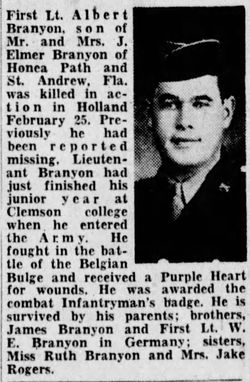 Her tendency to never reveal any undue amount of admiration or fondness for any of her suitors is another common thread. Like William’s uncertainty about her true feelings, sentiments like “I know you were bored to death all the time, weren’t you?” (from Forrest, in reference to their time together) show a calculated reluctance to confirm or deny her interest in any of the boys.

Leverage was obviously an important tool in Nellie’s plan.

Another consistency worth noting was Nellie’s particular taste in men. The World War II draft cards of these boys describes them all as being tall, slim or athletically built, with dark hair and eyes, a nod to her preference for the “tall, dark, and handsome” types (which would include her future husband, my grandfather, as well.)

Little more is known about how the dynamic between all of these young people played out, in terms of their relationship with Nellie.

The two brothers would go to war soon after the letters were written. Forrest Chapman would not see the battlefield, but would instead go on to a successful career with the railroad, and would reside in Connecticut before moving to Florida, living to age 80, with one son and two grandsons. William Branyon would serve in the 2nd and 8th armored division (known as “Hell on Wheels”) and would receive a Purple Heart for his service. He would live to the ripe old age of 86, long enough to see great-grandchildren.

Lt. Albert Branyon, his younger brother, would be killed in action at the Battle of the Belgian Bulge in Holland, at age twenty four.

A single letter from each of these men is all that was found in Nellie’s hope chest when she passed. But a separate, large clasp envelope contained a stack of letters, all from the most ardent admirer Nellie would have, besides my grandfather. His name was Gordon Thibodeaux, and his legacy of affection lives on in the surviving letters.

Be the first to comment on "Her Name Was Nellie, (Part 3)"