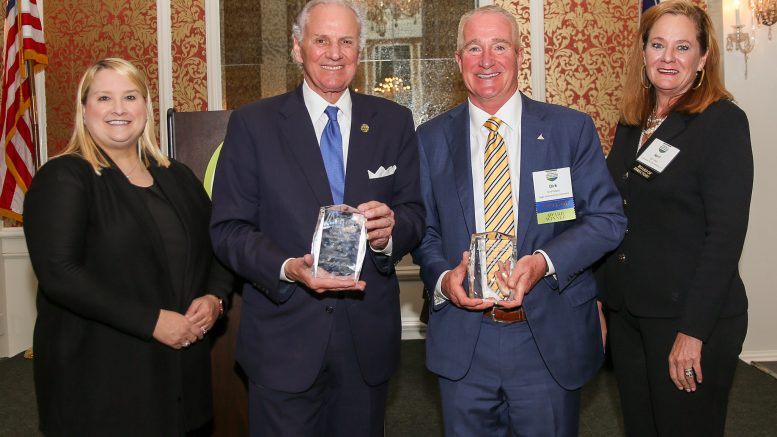 The South Carolina Manufacturers Alliance (SCMA) has awarded Dirk Pieper, President and CEO of Sage Automotive Interiors, and Governor Henry McMaster as the 2022 recipients of the Roger Milliken Defender of Manufacturing Award.

Established in 2006, the Defender of Manufacturing Award recognizes individuals in the public and private sector who have worked to advance the manufacturing industry in South Carolina. In 2012, the SCMA Board of Directors voted to rename the award to honor Mr. Roger Milliken, who passed away in December 2010. Recipients are chosen by the SCMA Executive Committee. The Roger Milliken Defender of Manufacturing Award is the most prestigious honor an individual can receive from the SCMA.

“The manufacturing industry, in South Carolina and throughout the United States, creates generational opportunities that enhance our quality of life, strengthen communities, and grows our economy,” said April Allen, Chair of the South Carolina Manufacturers Alliance and Director of US Government Relations with Continental. “That’s why we honor the individuals who have made extraordinary contributions for enhancing this industry with the SCMA’s most prestigious award. Their work and dedication in strengthening manufacturing will have a meaningful and lasting impact. We’re proud to recognize Governor McMaster and Dirk Pieper as the 2022 recipients of the Roger Milliken Defender of Manufacturing Award.”

Quotes from the 2022 Award Recipients:

“Throughout my career in manufacturing, I have seen firsthand the life changing opportunities and impact this industry creates. Great jobs, community involvement, and innovation that literally creates the future are just some of the hallmarks that makes American manufacturing so special. This is why we work every day to ensure manufacturers have the best environment possible, so businesses can thrive, and our workforce can be successful. It is an honor to have been a part of the process to make South Carolina such a great place for industry to prosper.” – Dirk Pieper, President and CEO, Sage Automotive Interiors

About the 2022 Award Recipients:

Dirk Pieper was named President and CEO at Sage’s inception in 2009. Mr. Pieper joined Milliken & Company in 1979 after graduating from Washington and Lee University with a B.S. degree in Chemistry. Mr. Pieper spent 15 years of his career in manufacturing, concluding as Director of Manufacturing. The next 15 years were spent primarily in a general management role involving marketing, development, and sales as the business manager of the Ford Business, Managing Director of Milliken’s European operations, and Global Business Manager. Mr. Pieper received his Masters of Business Administration from Clemson University in 1990. He resides in Greenville with his wife and four children.

Henry McMaster of Columbia became the 117th Governor of South Carolina on January 24, 2017 following then – Governor Nikki Haley’s appointment as United States Ambassador to the United Nations and was elected to a full term as governor in November 2018. Governor McMaster has led a strong and vibrant South Carolina economy, announcing more than 61,000 new jobs and over $18 billion in new capital investment in the state. Under his leadership, the state has made transformative investments in the classroom by expanding full day four-year-old kindergarten, raising K-12 teacher pay, and placing a school resource officer in every school.

Attached is a photo approved for media use. (Left to Right) Sara Hazzard, President and CEO of the South Carolina Manufacturers Alliance; SC Governor Henry McMaster; Dirk Pieper, President and CEO of Sage Automotive Interiors; and April Allen, Chair of the South Carolina Manufacturers Alliance and Director of US Government Relations with Continental. Photo credit: Devin Steele, Publisher of eTextileCommunications.