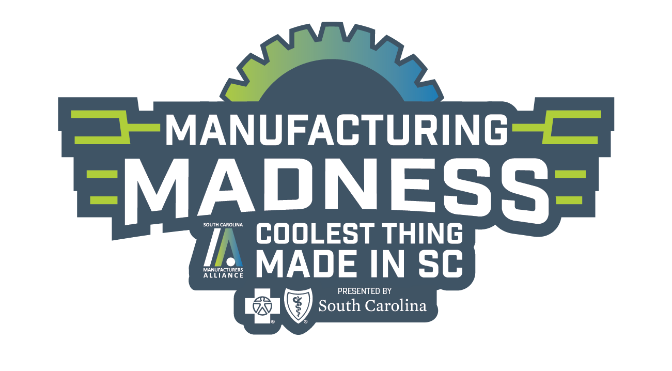 The Coolest Thing Made in SC is perhaps the hottest thing made in South Carolina.

Steel, which reaches temperatures of 3,000 degrees during the manufacturing process, earned the most votes in the final round of voting of the South Carolina Manufacturers Alliance’s inaugural Manufacturing Madness contest, presented by BlueCross BlueShield of South Carolina. Nucor Steel Berkeley, which operates a manufacturing facility in Huger, SC, was recognized as the winner of the contest in an event at the Statehouse today.

“Steel is a literal pillar of the modern world and our economy,” said South Carolina Manufacturers Alliance President & CEO Sara Hazzard. “Manufacturing Madness highlighted dozens of amazing products made in South Carolina, with so many of them made possible with steel. Nucor is one of our state’s most vital manufacturing companies, employers, and corporate citizens. They are a major contributor to both our state and local communities.   I want to congratulate their leadership and all of their 975 employees, and I know they will hold the title of Coolest Thing Made in SC with pride.”

Nucor Steel’s manufacturing facility in Huger opened in 1996. The company makes sheet and beam steel products for a wide range of industries including agriculture, automotive & appliance, construction, energy generation & transmission, oil & gas, heavy equipment, infrastructure, and transportation. The company also is a significant recycler, turning scrap metal into 3.5 million tons of steel annually. In addition, the Berkeley County plant’s greenhouse gas emissions are less than half the average for all global steel manufacturers.

The competition’s other three finalists include the F-16 Fighting Falcon manufactured by Lockheed Martin in Greenville, Electrolux and Frigidaire’s Single Door Refrigerator and Freezer made at its facility in Anderson, and the Honda Talon 1000 X-4 made by American Honda Motor Co., Inc. South Carolina Manufacturing in Timmonsville.

The four top products advanced to the final round after a nearly two-month contest that started with 175 products being nominated. The general public was invited to select their favorite products from that initial list, with the top 16 vote-getters advancing into the Manufacturing Madness bracket. From there, weekly voting trimmed the field in half until voters selected the winner from the final group of four products.

Governor McMaster and Michael Harris of BlueCross BlueShield participated in the announcement and said the following:

“South Carolina is proud to be a manufacturing powerhouse. It’s impossible to overstate the role this industry has played in transforming our economy, communities, and for building a global reputation where we not only make things but make them well. The products and companies who were a part of the Manufacturing Madness: Coolest Thing Made in SC contest helped showcase the amazing products our innovative and talented workforce create every day. We’re proud of what South Carolina makes because that makes South Carolina great.” – SC Governor Henry McMaster

“At BlueCross BlueShield of SC, we take great pride in being local and seeing our communities grow, and South Carolina’s manufacturing industry is a leader for advancing prosperity and opportunities in every corner of the state. What this industry does in our state is transformational not just economically, but in giving paths for our citizens a better future that has generational impacts. We are honored to have been a part of this contest and in bringing pride and awareness of what we make in South Carolina.” – Michael Harris, VP Sales at BlueCross BlueShield of SC

Be the first to comment on "Steel Voted Coolest Thing Made in S.C."