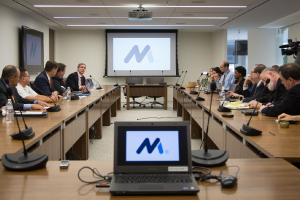 With the strong possibility negotiations on the Trans-Pacific Partnership (TPP) will conclude this week after the latest round of talks in Atlanta, Ga., the National Association of Manufacturers (NAM) renewed its call for ambitious outcomes that embrace manufacturing priorities.

“This week, TPP negotiators have the opportunity to reach a strong deal that will level the playing field and open new markets for manufacturers in the United States,” Jay Timmons, NAM President and CEO. “We appreciate the hard work that U.S. Trade Representative Michael Froman and his counterparts have put into these talks, but now is the time to commit to an agreement that will fuel our global economy through ambitious new market opportunities and high standards that are fully enforceable for all.”

Manufacturers have outlined their top priorities for a strong TPP agreement in a document released during the last TPP discussions in July and will continue to hold negotiators accountable for accomplishing these priorities in a final deal.

Timmons added, “With the potential to cover more than 40 percent of the global economy, the right TPP that is not weakened by lowest-common-denominator political expediency could be the catalyst that will turbocharge U.S.–Asia trade and have long-term benefits for the United States and its trading partners.”

Across the United States, manufacturers of all sizes increasingly are turning to trade to expand their customer base, grow their businesses, access critical inputs from overseas and create and sustain jobs here at home. Thanks in substantial part to past trade deals, U.S.-manufactured exports topped $1.403 trillion in 2014 – the highest level in America’s history – and are contributing to the continued growth of manufacturing in the United States, which also reached its highest level ever, with $2.09 trillion in output in 2014.

The Trans-Pacific Partnership (TPP) negotiations have the potential to create a final agreement that will be a strong catalyst for U.S. manufacturing growth for decades to come if it achieves the ambitious goals on which it was launched and is consistent with the congressionally approved negotiating objectives just enacted as part of Trade Promotion Authority (TPA) legislation.

Expected to cover 40 percent of the global economy, with both developed and developing economies as participants, a market-opening and strong TPP presents an important opportunity to expand manufactured exports and sales among large and growing TPP markets. The right TPP could also be a catalyst to help reverse U.S.-Asian trade trends that have been moving against the United States. For the five TPP nations with which the United States does not already have free trade agreements – Brunei, Japan, Malaysia, New Zealand and Vietnam – cumulative imports from the United States accounted for 8 percent of those countries’ total imports in 2013, down from 18 percent in 2000. Meanwhile, China has made major inroads in those markets, increasing its import share to 21 percent in 2013 from 12 percent in 2000. The TPP also will have greater impacts, potentially setting standards for new trade agreements in the Asia Pacific, with Europe and other regions for decades to come.

While the TPP has the potential to create substantial new opportunities and expand U.S. competitiveness globally, manufacturers have been unwavering in their commitment to ensure that the final TPP is the strongest possible agreement that levels the playing field for all, concretely opens all markets, facilitates trade and sets in place strong and enforceable rules for all on issues from intellectual property and investment to ecommerce, data flows and transparency. Before and throughout the negotiations, the NAM has provided detailed comments in letters and in meetings with U.S. and TPP negotiators as to key provisions that a final TPP should include in order to advance the interests of our nation’s manufacturers.

SCMA Statement on the Confederate Flag