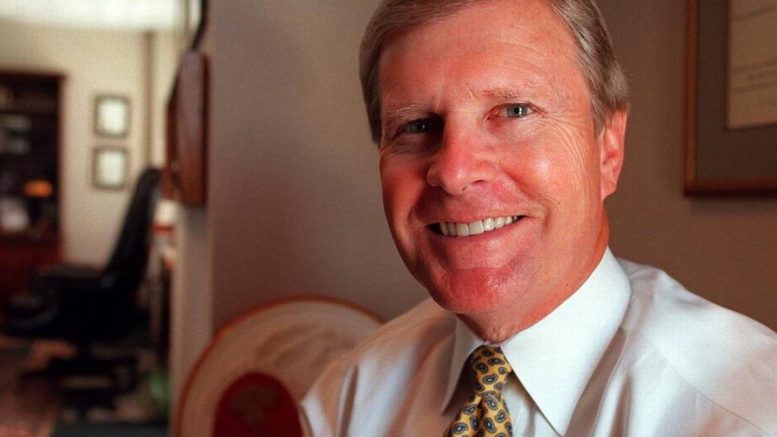 SCMFG is passionate for all things South Carolina. Because of this passion, we are producing a new feature called “Discovering South Carolina”. The brief commentary will highlight prominent people, places and things in the Palmetto State from yesterday and today.

Who Was Carroll Campbell Jr?

He was born in Greenville on July 24, 1940 and attended Greenville High School. He married Iris Faye Rhoads in 1959 and had two sons Carroll Campbell III and Mike Campbell. 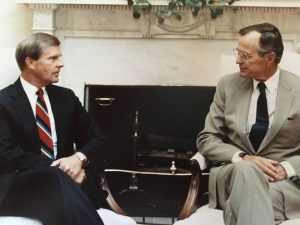 Campbell then won a seat in the United States House of Representatives  by defeating Greenville’s democratic mayor, Max Heller. He served  South Carolina’s 4th congressional district from 1978 until 1987.

Campbell was the first republican congressman to represent the 4th district since Reconstruction. During this time, he also served as the state chairman for Ronald Reagan’s presidential campaigns of 1980 and 1984. 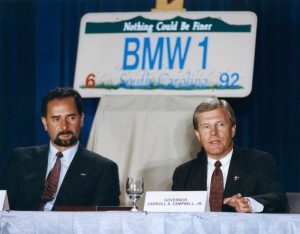 In January 1987, Carroll Campbell Jr became the 112th governor of South Carolina and did not leave office until January 1995 with a whopping 72 percent approval rating. In his second year as governor, he served George Bush’s presidential campaign as the Southern Regional Chairmen. However, he is probably best known for his decisive response to Hurricane Hugo and for his key role in BMW building their automotive manufacturing facility in Greer.

Recognizing his contribution, BMW later donated 10 million dollars to Clemson University’s International Center for Automotive Research. The facility was named the Carroll A. Campbell Jr. Graduate Engineering Center in 2002. For the remainder of his career, he served as President and CEO of the American Council of Life Insurers. 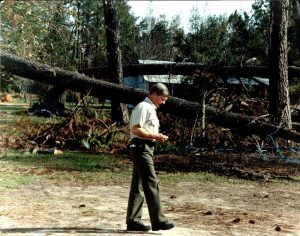 In 2001, he was diagnosed with Alzheimers and died on Dec. 7, 2005 from a heart attack.  Last year, U.S. Sen. Lindsey Graham dedicated the new Federal Courthouse in downtown Greenville to the late governor.

SCMFG honors the memory of Carroll Campbell Jr and deeply revere his contribution to our fine state. To learn more, we invite you to view the YouTube video below, "A Tribute to Carroll Campbell" by MrMalyerck.

A Tribute to Carroll Campbell

Be the first to comment on "Discovering South Carolina; Who was Carroll Campbell?"