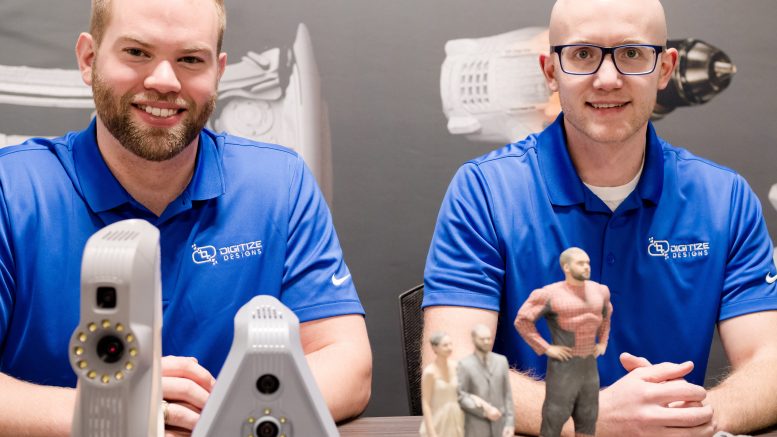 Digitize owners Andrew Bougie and Bo Helmrich have served a wide variety of clients since leaving their jobs at a major technology distributor to ride the 3D technology wave and create their own company. Digitize can reverse-engineer and create digital CAD models for new and replacement parts when original drawings aren’t available. They’ve created everything from 3D prototypes and end-user parts to a replica of a gorilla paw. Digitize also sells 3D scanners and software.

Amid the whir of machinery at Greenville’s NEXT Manufacturing facility for manufacturing start-ups, Bougie and Helmrich sat down with SCMFG for a quick chat about where 3D scanning and printing technologies fit in the manufacturing ecosystem.

(Side note, expect SCMFG to keep checking in with NEXT and other manufacturing spaces around the state.)

SCMFG: What kinds of work are you doing for manufacturers?

Helmrich: Often replacing parts. Sometimes they’re old. Sometimes they’re parts that come from suppliers that you don’t have an electronic copy, of and you need that digital version to either design around it, can edit the design and then manufacture it again.

We do a little bit of inspection as well, so you make something, and you want to scan it and compare it to the perfect CAD model to make sure it’s close to what the dimensions are supposed to be.

More than 50 percent of our customers are manufacturers, but we work with prosthetics and orthotic companies as well, animation studios, and we were scanning bones for the military a few weeks ago.

Whose bones? Our enemies’?

Bougie: No, they were recovered remains from battlefields. It’s for identifying people and that sort of thing. Really cool.

Do you find that manufacturers are well-versed in the 3D printing capabilities out there today?

Bougie: Some are, but some are definitely not.

Helmrich: We have to do a lot of educating. Most companies – most people – don’t know that 3D scanning exists, and that we’ve got handheld 3D scanners that are this fast and portable. There are some traditional methods that are very slow and much more cumbersome.

Helmrich: We’re seeing a lot of need to 3D scan products for use in augmented reality (AR) and virtual reality (VR). Now that Apple released their AR kit, we’re seeing a lot of manufacturers, especially on the furniture side, who are digitizing their furniture, so you can view it through your phone to see how it fits in your living room. As AR and VR become more popular, we see there being more trainings being performed, so you could scan a control room or a nuclear site, create that virtual environment, and put employees in that environment so they can be in more realistic scenarios.

Are there subsectors within manufacturing where people are more aware of the options?

Helmrich: There are some OEMs, say, companies that are making after-market parts for vehicles who at least know the concept if not the specific technology.

Bougie: That’s true: anyone who has been used to making complementary products for other manufacturers, they are more familiar just because they need to make parts fit and can’t always get the drawings.

Are you able to make a good amount of connections within South Carolina?

Helmrich: We cover the entire country, but we like to focus on the southeast. I would say yes.

What’s the balance of your business between hardware and services?

Helmrich: Selling scanners is more profitable, but as far as time spent it’s about 50/50. We’d actually like to do more services. That’s a little more scalable, and it’s also really cool to work closer with all these companies and dive in deeper into solutions and develop relationships.

Bougie: Yes, we sell scanners, but at heart we really like to make things. So, we love helping manufactures. Big companies, small companies, whatever it is, we like to see what they’re making and help them make those things. There’s just a lot of excitement there.

Helmrich: Yeah, you get your hands dirty a little bit.

Be the first to comment on "Meet Digitize: A Model Partner for Makers"