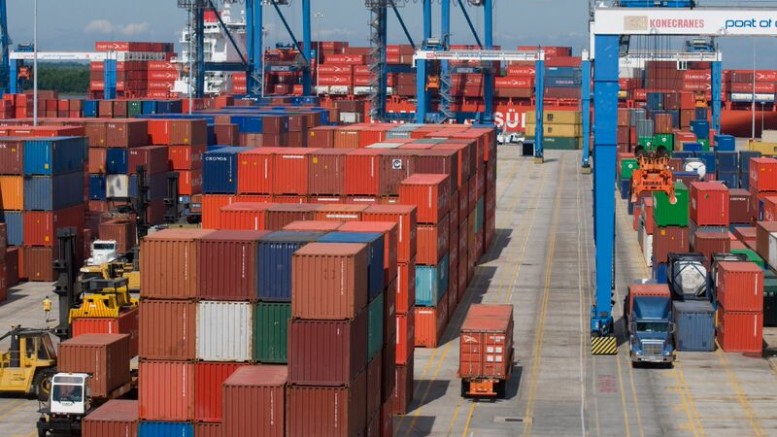 On the heels of announcing five-year plans for growth, investment and cargo base expansion at the State of the Port, South Carolina Ports Authority (SCPA) reported a 4 percent increase in August container volumes over the same month last year.

SCPA handled 170,528 twenty-foot equivalent units (TEUs) in August. With 345,751 TEUs moved during the first two months of the 2016 fiscal year, container volume is up 8.8 percent year-over-year.

As measured in pier containers, nearly 97,000 boxes moved across SCPA docks in August. Fiscal year-to-date pier container volume is up 8.1 percent, with 195,703 boxes handled during the last two months.

“August was a strong month across all business segments,” said Jim Newsome, SCPA president and CEO. “This broad-based growth is indicative of the modest, sustained volume increases we’re expecting as the 2016 fiscal year progresses. I continue to believe that Southeastern ports will see relatively strong growth compared to the overall U.S. market.”

Board Action
In action items, the Board approved the purchase of electrical equipment in preparation for the installation of additional refrigerated container racks at the Wando Terminal, and authorized the replacement of control systems and drives for 19 SCPA rubber-tired gantry cranes. A contract to S&ME, Inc. was also approved as part of the Wando Wharf structural improvement project, which will prepare the terminal to accommodate larger vessels and cranes while maintaining operations at SCPA’s busiest container terminal.

The Board adopted a resolution releasing 28.89 acres of property to the Charleston Naval Complex for transfer to Palmetto Railways for development related to the Intermodal Container Transfer Facility. The property was originally included as part of a larger parcel leased by SCPA in 1999 for the development of the Navy Base Terminal. The Board also approved the sale of 0.92 acres of the former Coal Tipple property to Kinder Morgan for $318,000.

The Board also approved a resolution authorizing SCPA management to begin the process of issuing $300 million in revenue bonds. The bonds will support capital expenditures planned through fiscal year 2019, including Navy Base Terminal site preparation work, the Wando Welch Terminal (WWT) wharf strengthening project and the two super post-Panamax cranes on order for WWT.

The Board elected officers to serve two-year terms beginning in 2016, with Pat McKinney to replace Bill Stern as Chair. Pamela Lackey will serve as Vice-Chair; Willie Jeffries, Secretary; and Mike Sisk, Treasurer.

“The realignment plan for SCPA’s senior team supports our aggressive goals over the next five years,” Newsome said. “I am confident that their skillful leadership well-positions the Port to meet the challenges ahead and enhances our ability to continue delivering a world-class product for our customers and stakeholders.”

Be the first to comment on "SCPA Container Volume Up Four Percent; Organizational Realignment Plans Announced"