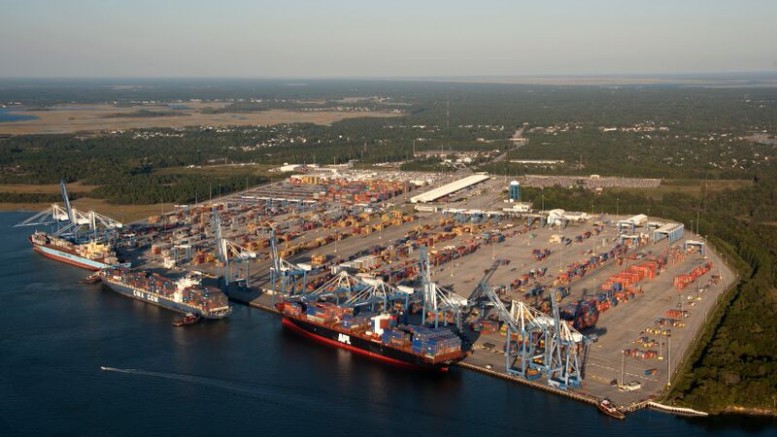 According to the results of a study released today, the South Carolina Ports Authority (SCPA) generates $53 billion statewide and $6.3 billion in annual economic activity in the Lowcountry region. The report highlights SCPA’s role as an economic driver and key competitive advantage for South Carolina.

“The Port is our state’s most strategic asset,” said Jim Newsome, SCPA president and CEO. “It enables South Carolina to recruit and serve the needs of companies with international supply chains, and in doing so, spurs economic development opportunities and generates well-paying jobs for people across the state. As SCPA continues to grow our volumes and modernize our facilities, there is no question that our competitiveness will deliver significant benefits to our stakeholders, the people of South Carolina. Here in the Lowcountry, the Port is an important part of our history and will be a driving force in our economy well into the future.”

The Lowcountry region, home to the Port of Charleston, has the largest SCPA footprint within the state with five operational terminals and one container terminal under construction. The study identified the following impacts of port operations on Beaufort, Colleton, Hampton, Jasper, Berkeley, Charleston and Dorchester counties:
•Approximately 11.9 percent of the total statewide economic impact attributed to SCPA benefits the Lowcountry.
•SCPA is responsible for nearly 23,000 jobs in the region.
•More than $1.2 billion in labor income from SCPA operations is infused into the Lowcountry economy annually.

The study was completed by Joseph Von Nessen, a research economist in the University of South Carolina’s Darla Moore School of Business. The results represent the total economic impact associated with port operations and port users during the 2014 calendar year. The impact of port operations derives from business activities at SCPA facilities in Charleston, Georgetown and Greer. The impact of the port users comprises all business activities among South Carolina firms that require a port facility to be completed.

“Port expansion is vital to the continued growth of South Carolina’s economy in the coming years, and SCPA’s strategic priorities ensure that our port system is prepared for the future,” said Bill Stern, SCPA Board Chairman. “By the end of the decade we will achieve the deepest harbor on the East Coast, open a new container terminal on the former Charleston Navy Base and modernize our existing facilities. We are well-positioned to achieve strong volume growth that will benefit not only our port, but the entire state.”

“For industry to succeed, an efficient and effective way to transport goods and services is crucial,” said Secretary of Commerce Bobby Hitt. “Thanks to a robust infrastructure system � featuring the nation’s most productive Port � South Carolina offers exceptional global connectivity, providing our businesses with access to marketplaces in all corners of the globe. From the tremendous success of our Inland Port to the continued growth and expansion of the Port of Charleston, I congratulate SCPA on its tremendous leadership, filling a critical role in the effort to keep our state moving forward.”

The study concluded the following benefits of SCPA from a statewide impact perspective:
•1 in every 11 jobs in South Carolina can be attributed directly or indirectly to SCPA. This corresponds to $10.2 billion in labor income that would not exist without the presence of SCPA.
•On average, jobs directly or indirectly supported by the Port pay nearly 40 percent higher than the state’s average annual salary.
•The $53 billion in annual economic output supported by SCPA represents nearly 10 percent of South Carolina’s total annual gross state product.
•Port operations produce more than $912 million in tax revenue annually for the state.

“Although the Port’s $53 billion economic impact is significant on its own terms, the Port’s presence in South Carolina also has broader implications for long-run economic development in the state,” said Von Nessen. “The key competitive advantage of the Port comes about through its ability to facilitate the ongoing development of export-oriented industry clusters, particularly in advanced manufacturing. As these industry clusters expand, they will build a strong, stable foundation for the state’s economy that will generate higher and more consistent rates of economic growth across the state over time, which will benefit all South Carolinians.”

USC was selected to complete the study through a partnership between SCPA and the South Carolina Applied Research Center for Supply Chain and Logistics (ARC). ARC was established by the South Carolina Department of Commerce in conjunction with the South Carolina Research Authority to focus on supply chain and logistics applied research services in collaboration with businesses and state academic institutions.

“We are excited to have this economic impact study for SCPA as our initial project for the newly established center,” said Peter Straub, ARC Executive Director. “This study not only highlights the great impact of the SCPA on the state of South Carolina, it also identifies the strength of the business growth in South Carolina. The study exemplifies the role of SCPA as the primary catalyst in the supply chain and logistics process for the businesses in the Palmetto State.”

SCPA officials will travel across the state from October through December for announcements of regional-specific data included in the study beyond the Lowcountry, including the Pee Dee, Midlands and Upstate.