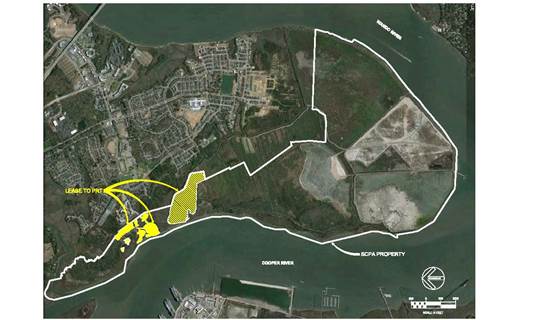 The 99-year lease fulfills a state budget proviso requiring the SCPA to transfer 50 acres of its property on Daniel Island to the agency that oversees the state’s parks and recreation facilities, providing residents of the City of Charleston visitors from across the TriCounty region access to additional passive and active recreational space.

“This land transfer is a significant milestone in safeguarding the future of the port and the Lowcountry,” Representative Merrill said. “For over 15 years we have struggled to find a mutually-beneficial purpose for the surplus port property on Daniel Island. Now, due to the work of visionaries like the SCPA Board, Jim Newsome, Matt Sloan and a host of others, we can begin to see those plans take shape.”

“By transferring 50 acres of land and also offering other port property on Thomas Island for sale to its previous owners, we’re helping protect local quality of life while returning some property to the private sector,” Senator Grooms said. “It’s a great example of what can be accomplished when we work together to determine sound public policy.”

“My goal all along has been to assure the residents of the Island that property previously proposed for a container terminal would no longer be on the table, and that the new port permitted and under construction on the former navy base would be the SCPA’s future capacity in the Charleston area,” Merrill said. “What began as a bitter fight and disagreement can now become a tremendous victory for all.”

In addition to the recreational space to be managed by SCPRT, approximately 900 of the 1300 acres of SCPA-owned property on Daniel Island will be utilized for dredge disposal needs. Potential plans for the remaining acreage include the opportunity for The Daniel Island Company to acquire a small parcel proximate to its development. In addition, Representative Merrill and Senator Grooms are working with SCPA to secure the regulatory permissions required to utilize a portion of the property for a saltwater mitigation bank for South Carolina.

“While it is critical for the Port to maintain necessary dredge disposal capacity in preparation for our harbor deepening project, we are pleased that our surplus property can be utilized by local residents for recreational use,” said SCPA president and CEO Jim Newsome. “We appreciate the involvement of Representative Merrill and Senator Grooms and believe that today’s announcement is a very positive outcome both for the Port and for Daniel Island.”

Above: A 50-acre property, noted in yellow, has been leased to South Carolina Department of Parks, Recreation and Tourism for public use.